After an eight-month journey to Mars, success for NASA’s Curiosity rover will hinge on a few crucial moments. The largest and most complicated piece of machinery ever sent to the red planet, Curiosity will begin its seven-minute fall through the wispy atmosphere at 05:24 UTC on 6 August. On Earth, mission scientists will be un­able to do anything but wait and hope for the signal that the six-wheeled remote laboratory is resting safely in the feeble Martian sunlight.

If Curiosity lands successfully in Gale Crater, it will eventually trundle over to a 5.5-kilo­metre-tall stack of layered deposits ringed by water-altered minerals. Ascending the mound, the rover will chart hundreds of millions of years of geology and help researchers to deduce whether life could ever have existed on Mars. 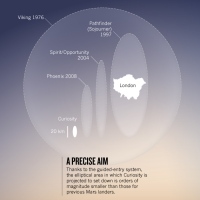 But first it has to arrive. On its way down, the spacecraft will fire 76 charges, adopt 6 configurations and slow from 6 kilometres per second to a standstill. It will be the first craft since the Apollo Moon programme of the 1960s and 1970s to use a guided-entry system, and the final leg of the descent will mark the first use of a ‘sky crane’. At 900 kilograms, Curiosity is too heavy to land in airbags like earlier rovers, and retrorockets like those used in the Viking Mars landings of the 1970s would kick up damaging dust. Instead, a hovering platform will unspool the rover. “All sorts of things can go wrong,” said NASA administrator Charles Bolden at a meeting of the NASA Advisory Council on 25 July. “That’s what makes it a real nail-biter.”

NASA officials told the Jet Propulsion Laboratory (JPL) in Pasadena, California, to ensure a 95% chance of landing success. Engineers say they have surpassed that: the current assessment, based on millions of simulations, finds only a 1.7% risk of failure. But that holds only if the models have assessed every possible vagary of environment and machine. What’s worrisome are the unknown unknowns, says Steven Lee, the mission’s guidance, navigation and control-systems manager at the JPL. “Probably the overall biggest risk is our lack of imagination.”