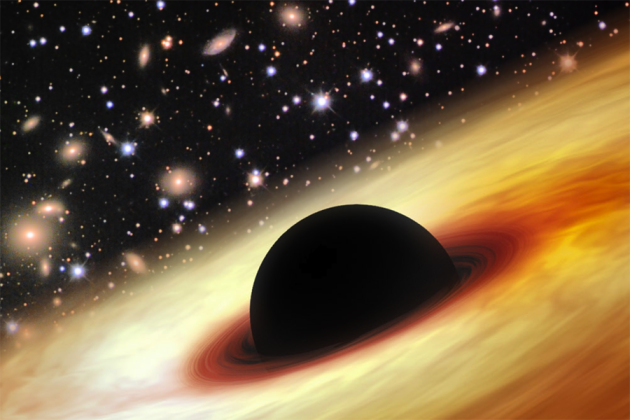 An artist’s impression of a quasar with a supermassive black hole at its heart in the distant Universe.

A black hole that grew to gargantuan size in the Universe's first billion years is by far the largest yet spotted from such an early date, researchers have announced. The object, discovered by astronomers in 2013, is 12 billion times as massive as the Sun, and six times greater than its largest-known contemporaries. Its existence poses a challenge for theories of the evolution of black holes, stars and galaxies, astronomers say.

Light from the black hole took 12.9 billion years to reach Earth, so astronomers see the object as it was 900 million years after the Big Bang. That “is actually a very short time” for a black hole to have grown so large, says astronomer Xue-Bing Wu of Peking University in Beijing. He led an international collaboration that describes the discovery in Nature1.

For its age, this black hole “is really much more massive than anything else we have seen so far”, says Christian Veillet, director of the Large Binocular Telescope Observatory in Tucson, Arizona.

Wu and his colleagues spotted the black hole using the Lijiang Telescope in Yunnan, China. The object appeared as a bright, red, point-like source. The brightness and spectrum of its light revealed it to be an ancient quasar: a large black hole that occupies the centre of a galaxy and causes interstellar gas to overheat and shine brighter than any star as it spirals into the hole's gravitational sink.

The team analysed the quasar's spectrum in more detail — an effort that eventually involved four larger telescopes around the world — to estimate the velocity of the infalling gas. This revealed the strength of the object’s gravity, and hence its unusually large mass.

Supermassive black holes are thought to lurk at the centre of most galaxies, and some have been seen that are as many as 40 billion times the mass of the Sun2. But reaching such sizes involves swallowing interstellar matter and merging with other large black holes, so it takes time. Until now, the most massive known black hole less than 1 billion years old was around 2 billion solar masses3.

One possible explanation, says Chris Willott, an astronomer at the Canadian Astronomy Data Centre in Victoria, is that some black holes could begin their lives not with the gravitational collapse of a single star, but with the direct collapse of a very large gas cloud. “We are still very uncertain as to the modes of black-hole formation and growth in the early Universe,” he says, “so we do not have a leading model for this observation to pose problems to.” Wu's team now plans to make follow-up observations, including some using the Hubble Space Telescope.