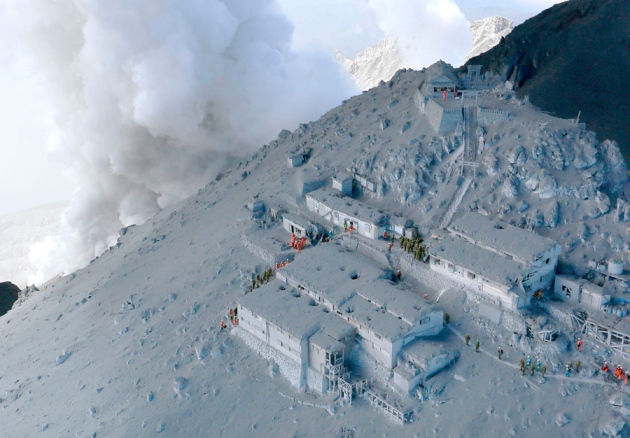 Few warning signs preceded the eruption that began on 27 September at Mount Ontake.

Mount Ontake in central Japan erupted on 27 September at 11:53 a.m., spraying ash and debris on the surrounding region, as well as on hundreds of unsuspecting hikers on its slopes. Of those who were on the mountain, 12 have been declared dead and another 24 are feared dead.

Nature explains why the eruption caught scientists unaware — even in a technologically advanced country accustomed to volcanic activity.

How many active volcanoes does Japan have?

There are 110 active volcanoes in Japan. Of those, 47 are watched especially closely because they have erupted recently or shown worrying signs, such as seismic activity, ground deformation or emission of large amounts of smoke. Mount Fuji and Mount Ontake are among the 47. Access is normally restricted only at a handful of its volcanoes, which does not include Ontake or Fuji.

Has Ontake erupted in the past?

Ontake erupted in 1979, 1991 and 2007. All of these were hydrovolcanic eruptions, resulting from the explosive release of ground water heated until it escapes as steam. None showed signs of rising magma, although for the 1979 and 1991 eruptions there was not enough instrumentation in place to rule out magmatic activity. 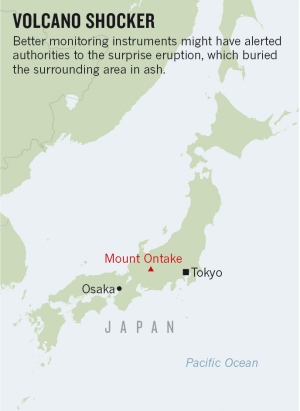 What instruments were in place at Ontake?

There are 12 seismometers for detecting seismic waves related to volcanic activity, all within a 10-kilometre radius of the volcano. There are also five Global Positioning System (GPS) stations and one tiltmeter, all of which measure the surface deformation that would accompany rising magma. These instruments are restricted to areas linked to the electricity grid. Some volcanoes in Japan, although not Ontake, also have devices for measuring gas release. This could, for example, show whether increased amounts of sulphur dioxide are escaping — a possible sign of an imminent eruption. Some volcanoes also have devices for measuring underground electrical conductivity: an increase in conductivity can signal rising water or magma.

What did these devices show before and during the eruption?

The tiltmeter and GPS data showed no change in the run-up to or during the eruption. “In big eruptions, magma rises, and the tilmeters and GPS would pick it up,” says Toshikazu Tanada, who heads volcano research at Japan's National Research Institute for Earth Science and Disaster Prevention in Tsukuba. “But there was no sign of this.” Even though there are relatively few instruments at Ontake, Tanada adds, it is unlikely that they would have missed significant magmatic activity.

The seismometers did show a spike in activity. According to figures from the Japan Meteorological Agency, after a quiet August with no seismic activity the number jumped to 52 on 10 September and 85 on 11 September. After that, the rate settled at a (still-high) 10–20 per day. Also, 11 minutes before the eruption, the seismometers detected a volcanic tremor, a type of seismic activity distinct from earthquakes that often accompanies eruptions.

Why did the government not issue a warning and evacuate people?

Increased seismic activity at a volcano, like that observed in early September, can signal a greater chance of an eruption, but often it does not. In 2011, the same type of increase was observed at Ontake without any subsequent eruption. Unlike some volcanoes, such as Mount Usu in Hokkaido, Ontake does not have an easily predictable cycle. “It's a very quiet mountain,” says Tanada. “Each active volcano has its own characteristics.”

Most volcanoes show erratic seismic activity. Mount Fuji, for example, often has dozens of small earthquakes in a day, and others can have more than 100. If the rules were to restrict people from a volcano when it showed the activity seen at Ontake before last week, the authorities would have to close more than 10% of Japan’s volcanoes to visitors. “We could just restrict everywhere, but people don’t want that,” Tanada says.

Access is now restricted to within 4 kilometres of the crater. Two other volcanoes in Japan are currently subject to similar restrictions, and at five others, hikers are barred from approaching the craters.

What will happen from now on?

Because of the lack of surface deformation, there are no signs that Ontake's ash eruption will be followed by a magma eruption, says Tanada. “But that cannot be ruled out. We can’t say anything other than that it will be likely to continue for a while — probably for a few weeks or a month. But at the end of the month, we might just say the same thing.”

Is there something more that can be done in the future?

There will probably be some debate in Japan as a result of the disaster, which will lead to a change in the system, Tanada says. He mentions two key changes that could be made. First, new instruments — in particular, gas-measuring devices — could be installed to improve monitoring. Second, the country could establish an early-warning system, similar to the one already in place for earthquakes, which is the world’s fastest. “Even if we just start implementing the system one step at a time, we need something that will keep this from happening again,” Tanada says.