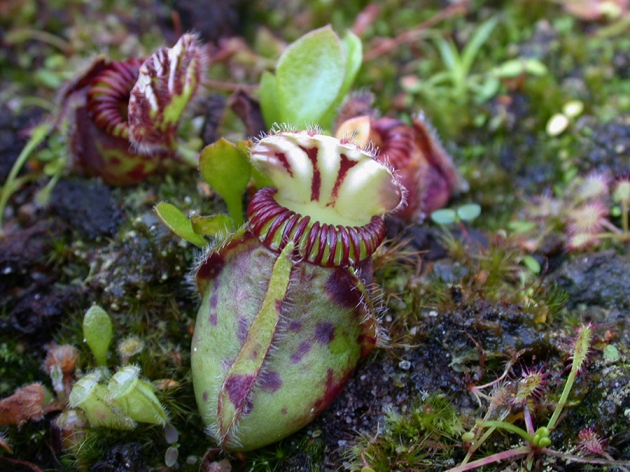 The Australian pitcher plant. Be afraid, but not very.

A lesser-known mystery by the creator of Sherlock Holmes concerns the fate of a man called Joe ‘Alabama’ Hawkins. Hawkins has vanished and is presumed murdered; a man is set to hang for his murder before Hawkins rolls, half-digested, from the leaf of a giant Venus flytrap.

‘The American’s Tale’ by Arthur Conan Doyle was one of a crop of monster-plant stories that started to appear towards the end of the nineteenth century — a literary genre that climaxed decades later with The Day of the Triffids by John Wyndham. Arguably, it started with an 1875 work of non-fiction: Insectivorous Plants by a certain Charles Darwin. Scholars of monsters in fables and literature, and there are more than you might think, point out that man-eating plants (unlike, say, vampires, werewolves, zombies and dragons) were unheard of until Darwin’s book seeded the idea in the imagination.

The flytraps of Doyle’s story were unfeasibly big, but they were also in the wrong place. Despite the name, ‘Alabama’ Hawkins met his end as flytrap mulch in the Flytrap Gulch in Montana. And, in the real world, Venus flytraps (Dionaea muscipula) don’t grow in Montana. Native Venus flytraps, in fact, don’t grow anywhere in the wild except in boggy soil within 100 kilometres or so of Wilmington, North Carolina, on the eastern coast of the United States. That rare population is under such threat from poachers that it is now a felony to remove one of the plants: the first person to be imprisoned under the new law began his sentence last year. (The penalty used to be a US$50 fine and a slap on the wrist.)

There are many other species of carnivorous plant worldwide. And in a study released this week (K. Fukushima et al. Nature Ecol. Evol. 1, 0059; 2017), researchers describe how these meat-eating plants rely on much the same genetic recipe, even though the different groups evolved the habit of carnivory quite independently. All were after the same thing: nutrients such as nitrogen and phosphorus that they couldn’t extract from the meagre soil.

Some scientists argue that there are more carnivorous plants than is generally accepted (M. W. Chase et al. Bot. J. Linn. Soc. 161, 329–356; 2009). The Venus flytrap and the rest, they say, are merely the most active and open meat-eaters. Others are more subtle, and have evolved to trap flies that are then just left to decompose and leach their lifeblood into the surrounding soil, within reach of hungry roots. Among these hidden carnivores, they say, are the humble potato and even that garden favourite, the petunia. Be afraid, but not very.