The finding hints that chimps, like humans, experience some form of synaesthesia, an uncommon condition in which the senses become intertwined, says Vera Ludwig, a cognitive neuroscientist at Charité Medical University in Berlin, Germany, who led a study published this week in Proceedings of the National Academy of Sciences1. Some synaesthetes associate different colours with letters and numbers, for instance, whereas others taste shapes. 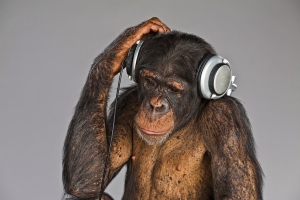 Chimpanzees, like humans, seem to associate high-pitched tones with light colours and low-pitched ones with dark colours.

Nearly all humans tend to link high-pitched sounds with lighter, brighter hues and bass-filled sounds with dark shades. People judge high vowels, such as 'mil', as white, for example, and consider lower-toned syllables, such as 'mol', as black. Ludwig thinks such connections represent a mild form of synaesthesia, with both emerging from neural cross-wiring between nearby brain regions involved in processing senses.

To determine whether humans learn to associate sounds and colours from others, or whether they are innate and do not require language, Ludwig searched for the associations in captive chimpanzees.

She and colleagues at Kyoto University in Japan showed six chimps aged 8 to 32 a small black or white box, and then trained them to to select a square of the same colour on a screen to receive a fruit reward. The apes also heard a high or low tone when making their choice.

When high tones accompanied white squares and low tones were matched with black, the animals picked the correct colour 93% of the time, on average. When the colours and sounds were reversed, their success rate fell to about 90%.

In the same game, 33 humans made too few mistakes to detect any perceptual bias. But humans did make correct decisions more quickly when sounds and colours matched.

Because chimps and humans showed similar biases to paired tones and colours, language is not needed to perceive the links, Ludwig says. She suggests instead that these biases were present in the common ancestor of both species, which lived approximately six million years ago, and may have influenced human language.

Edward Hubbard, a neuroscientist at Vanderbilt University in Nashville, Tennessee, who has studied the neural basis of synaesthesia, doubts that chimps experience the same range of synaesthesetic experiences as humans. The human condition involves words, numbers and other cultural constructs, he points out.

“There may be other forms of synesthesia, such as seeing colours for sounds, or hearing sounds in response to visual motion, that are present in non-human animals,” says Hubbard.

However, Danko Nikolic, at the Max Planck Institute for Brain Research in Frankfurt, Germany, questions whether study has any relationship to synaesthesia. He distinguishes perceptual quirks such as the sound-colour correspondence from true synaesthesia, which he believes emerges from associations between higher concepts, not crossed connections in brain areas that process senses. “Too many phenomena have been named synaesthesia,” he says.

Finding synaesthesia in chimpanzees, or any other animal, could prove difficult, given the rarity of the phenomenon in humans and the subjective nature of the experience, Ludwig says. Estimates vary hugely, but one study estimated that about one percent of people see numbers or letters as having colour2. Her Japanese colleagues are instead looking for other examples in which one sense influences the perception of another in chimps. Humans also associate low pitches with large objects, for instance.