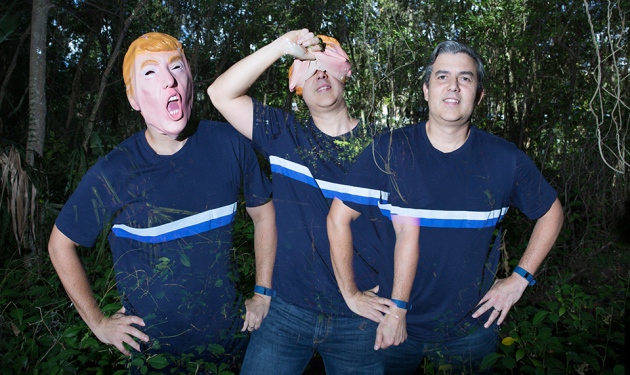 As the US presidential election grinds into the final stretch, there is one version of Republican nominee Donald Trump that is laser-focused on research. The @ScientistTrump Twitter account showcases a fictional “Donald Trump, PhD”, who does the biggest, best science anywhere in the world. He hounds “weak” leaders of funding agencies and the “failing” academic journals that don’t endorse him. “Only I can Make Science Great Again,” he tweets.

The man behind @ScientistTrump  — an ecologist named Emilio Bruna at the University of Florida in Gainesville — is no stranger to social-media antics. Last year, as editor-in-chief of the ecology journal Biotropica, he instigated rap battles with the Twitter accounts of other science journals. Bruna started the Trump parody account in July after joking with fellow editors that they should review papers as the presidential candidate would.

The feed went viral immediately, amassing more than 6,400 followers. Bruna aims to amuse, but the account is also a tool for him to point out real problems in science and academia, including sexual harassment. @ScientistTrump frequently praises journal paywalls and expensive proprietary software. “If Donald Trump likes it, it’s probably something we’d like to change about our profession,” Bruna says.

The ecologist runs the account alone, closely monitoring the real Trump’s prolific Twitter feed and speech transcripts. He modifies the candidate’s remarks only slightly to preserve Trump trademarks, such as frequent uppercase text and his braggadocious style.

“It’s amazing how much this has really ruined my life,” Bruna says. “I feel like I know this person’s brain intimately, and it’s really not cool.”

The ecologist finds the real-life candidate’s comments repulsive, particularly those that disparage minorities and promise to deport immigrants. Bruna, who is a US citizen, was born in Mexico, and his wife is a US resident alien. He says his 11-year-old son has come home from school crying, worried that his mother would be deported under Trump. “I don’t think this election is funny anymore,” Bruna says.

He plans to continue with the @ScientistTrump account, regardless of the election’s outcome. The response has been overwhelmingly positive, although he receives occasional hateful tweets from people who, presumably, don’t realize that it’s a joke.

Bruna has been able to parlay @ScientistTrump’s notoriety into a political-action committee (PAC) that can collect donations for candidates or causes. His plans for the ‘Make Science Great Again’ PAC include supporting science education and ecology organizations. The PAC website collates the real Trump’s tweets about science and plans to sell Make Science Great Again bumper stickers. He has not received any donations to date.

In the final weeks before the election, Bruna expects that the real Trump will keep him particularly busy. “These days, it’s been a killer because he just won't put his cell phone down,” Bruna says. “I wish he’d do that because I’ve got a manuscript to work on.”

Nature decided to catch up with @ScientistTrump to get his thoughts on the state of US science — in character, of course. The interview has been edited for length and clarity. The Trump campaign did not respond to a request for comment for this article.

What do you think about the state of science in the United States?

US science used to be great, but now it’s a disaster. You know it, we all know it. NIH [National Institutes of Health] and NSF [National Science Foundation] are imploding, they’re very bad. We are facing the threat of Radical Open Access.  Also so many in the Postdoctoral-American community are doing so badly, they’re living in Hell — poverty & rejections way up, jobs & grants way down, tremendous problems. Only I can Make Science Great Again.

As president, what will you do to Make Science Great Again?

The first thing I’m going to do is build a huge paywall around Open Access journals and make PLoS pay for it. And then we are going to publish lots of papers because of all the grants I have created…people are going to get tired of how many papers they have! Only I can do this — I have a very rich lab, and I have a huge H factor. I’ve been building my H factor all my life with only a small number of citations from my adviser to get me started.

What makes you a better candidate than your opponent?

My opponent has never been a data creator, and won’t ever say the words “Radical Open Access”. Her former collaborator also *did* far worse things with his graduate students than I ever said to mine. It was just lab bench talk, I’m not proud of it. I’ve apologized to my lab group.

As president, who would you appoint as director of the NIH, NSF, DoE and NASA?

I am looking to appoint agency directors very much in the mold of Dr. Oz or Senator James Inhofe [Republican, Oklahoma]. I’ve actually picked ten candidates already — highly thought of, and actually very beautifully reviewed by just about everybody. Tremendous scientists.

What do you think about the news that China just built the world's biggest telescope? Is the United States falling behind?

I love NASA. Space is terrific. But right now, we have bigger problems. We've got to stop the flood of scientists coming into our country. When Mexico sends its scientists, they’re not sending the best. They’re bringing data. They’re Bayesians. Not all are terrible — some are nice people. I have had dozens of Mexican postdocs work for me & they like me very much.

What do you think of the new Nobel laureates?

Several of them spoke at Mar-A-Lago years ago. I didn’t attend because they're boring & often wrong — total dopes!