NASA and a group of universities known as the READI network have begun testing an earthquake-warning system based on satellite data from the Global Positioning System (GPS). The method could have allowed Japanese officials to issue accurate warnings of the deadly March 2011 earthquake and tsunami ten times faster than they did, say scientists.

The system is currently being tested using the US Pacific Northwest Geodetic Array: hundreds of GPS receivers placed along the North American coast between Northern California and British Columbia in Canada. The sensors provide real-time measurements of ground movement caused by nearby and offshore seismic faults. 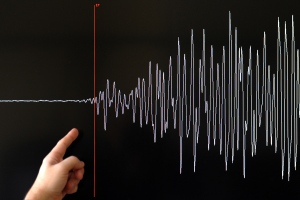 Seismic traces record the magnitude of earthquakes — but satellite data can do it faster and more accurately.

Tim Melbourne, a geodesist at Central Washington University in Ellensburg and the array's lead scientist, addressed a meeting of the Seismological Society of America in San Diego, California, this week. "The Cascadia subduction zone is our main focus," he said. "That is potentially a magnitude-9 fault."

The GPS receivers were installed in the late 1980s to study plate tectonics, and were upgraded in the early 2000s to provide hyper-accurate data for land surveyors as a supplement to conventional seismic arrays.

They are placed so that seismic waves travelling from dangerous faults towards populated areas first hit the sensors, and trigger a warning message. This gives officials a few seconds' notice of approaching shock waves and helps them to work out where the epicentre of the quake is.

"The data get to our lab in under a tenth of a second," says Melbourne, "and we can process that into a position estimate good to a couple of centimetres within a half-second."

Conventional seismometers provide similar information. On 13 April, for example, a small earthquake of magnitude 3.5 occurred near Aromas, California. "At my desktop in Berkeley, I got 25 seconds' warning," said Richard Allen, director of the seismology laboratory at the University of California, Berkeley.

But seismometers have limitations. "They do a beautiful job discriminating among magnitude 2, 3, 4, 6, earthquakes," says Melbourne. "But they run into trouble where you have to distinguish a magnitude 8 from a magnitude 9." This is partly because in big quakes, the ground may shake for longer, but not significantly harder.

GPS has no such problem, because it directly measures the movement of the ground. "If the ground lurches by many metres, it's unambiguous evidence for a very large earthquake," says Susan Hough, a seismologist at the US Geological Survey in Pasadena, California.

Melbourne and Allen use the Japan earthquake as an example. In March 2011, Japanese officials relying on seismometer data were able to issue earthquake warnings within eight seconds of detecting that something major was going on. "But they thought it was magnitude 7.1," says Allen. The estimate increased to 8.1 within 2 minutes, but it took another 20 minutes to reach the final value of magnitude 9.

Using his own calculations with real-time GPS data from the Japanese earthquake, Melbourne got the right magnitude within two minutes. He is surprised that the Japanese didn't do it themselves in 2011. "Japan has the gold standard of everything [related to earthquakes]," he says. "I thought the Japanese would have incorporated this a decade ago."

It is hard to tell whether more lives would have been saved. "But I have a feeling that if they had known within two minutes, it would have been very different," says Melbourne. Seth Stein, a geophysicist from Northwestern University in Evanston, Illinois, adds that while Japan's warning system worked well enough to save many lives,"a lot of people who didn't evacuate or didn't evacuate far enough didn't think it would be that big. So it's important to get a better take, early on, about how big an earthquake is."

But not everyone thinks that GPS is the best warning system. The main complaint is that glitches could cause false earthquake alarms. "For example, one tends to get spikes when satellites come over the horizon, which can generate large, spurious signals," says Hough.

Yehuda Bock, a geodesist at Scripps Institution of Oceanography in La Jolla, California, says that the best solution is to add inexpensive seismometers to GPS stations, so that the instruments can back each other up.

But Melbourne thinks that GPS signal processing is already good enough to be used on its own. "At some point you have to say, OK, it all seems to be working," he says. "We're rapidly developing it and pushing to make it better, but all the pieces are in place now."