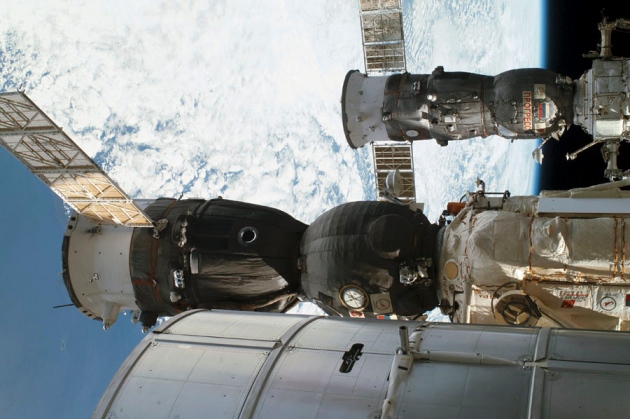 Sanctions imposed on Russia over its actions in Ukraine have prompted it to announce that it will cut its space-science ties with the United States.

Russian deputy prime minister Dmitry Rogozin on 13 May told a news conference in Moscow that in 2020 the country will discontinue its long-running collaboration with the United States on the International Space Station (ISS). And in response to a ban imposed last month on the US export of high-tech equipment to Russia, the Kremlin is set to bar the United States from using Russian rocket engines for military satellite launches, he said.

Reacting to Russia’s annexation of the Crimean peninsula and the escalating crisis in eastern Ukraine, the US government last month ordered federal agencies and their staff to stop doing business with Russia. However, Washington said that ISS operations would be excluded from the sanctions (see 'Western science severs ties with Russia').

Rogozin said that Russia will decline a US request to help keep the ISS flying until at least 2024, four years beyond its nominal lifetime. Rogozin was more explicit in a tweet posted after his press conference, saying that Russian space agency Roscosmos “doesn't plan to continue cooperation with the US on the ISS after 2020”.

He did not mention how the policy will affect the other members of the ISS, which include Canada, Japan and the European Space Agency.

NASA, which currently relies on Russian Soyuz capsules to fly astronauts to and from the ISS, said in a statement that it has not yet been officially notified by Russia of any changes in Russian space policy. “Space cooperation has been a hallmark of US–Russia relations, including during the height of the Cold War, and most notably, in the past 13 consecutive years of continuous human presence on board the International Space Station,” NASA said in a statement.

NASA said that for now, operations on the ISS will continue normally. On 14 May three crew members — from Japan, Russia and the United States — safely landed in Kazakhstan after 188 days in space. To replace them, Reid Wiseman of NASA, Maxim Suraev of Roscosmos and Alexander Gerst of the European Space Agency are scheduled to launch from Kazakhstan on 28 May.

The ISS consists of two sections, one maintained by Russia, the other by the United States, and orbits the Earth at altitudes between 330 and 435 kilometres. It has been continuously occupied since November 2000 by crews involving members from 15 different nations.