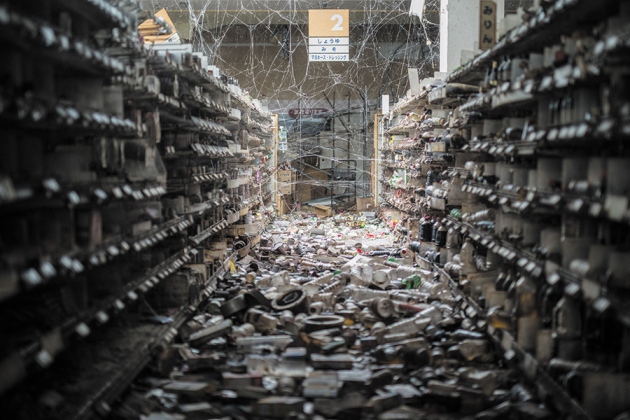 An abandoned supermarket in the Fukushima prefecture in July 2015.

Next week will mark five years since 11 March 2011, the day of the devastating Tohoku earthquake and tsunami, and the accident that followed at the Fukushima Daiichi nuclear-power plant of the Tokyo Electric Power Company. The quake and tsunamis killed nearly 16,000 people and injured more than 6,000; 2,600 are still missing.

Fukushima prefecture, the location of the crippled nuclear plant, was hit particularly hard1. The Japanese government provisionally rated the severity of the accident on par with the 1986 Chernobyl disaster — a seven on the seven-point International Nuclear and Radiological Event Scale2. Around 110,000 people had to evacuate because of dispersed radionuclides. Despite the large-scale decontamination efforts, about 70,000 former residents are yet to return.

Shocked by the fallout, Japan changed its energy policy. The year before the disaster, the 2010 Basic Energy Plan had called for 53% of electricity generation to come from nuclear power by 2030, implying significant new construction. Since the accident, Japan's energy policy has featured an expanded role for renewables and market liberalization — transitioning from a regional-monopoly model to one that is open to competition. (Some policy changes were made after the change in government in December 2012.)

In July 2012, reflecting the public's desire for a transition towards renewable energy, Japan introduced a feed-in tariff, which guarantees renewable-energy generators a high price for the electricity that they feed into the grid; it was particularly generous for solar photovoltaics. Installed solar capacity more than quadrupled in the first three years. A whopping 80-gigawatt capacity — 90% greater than Japan's nuclear-power capacity — has been approved. Next month, the retail electricity market will be fully liberalized, attracting a huge number of new entrants to the previously closed market.

The government also strengthened nuclear security substantially. A newly created, independent Nuclear Regulation Authority instituted new safety measures in 2013. All of Japan's nuclear-power plants halted operation for inspection after the accident, and the share of nuclear in power generation dropped from about 30% in 2010 to zero in 2014. Only 4 of the 44 reactors have been restarted so far.

The public debate on nuclear rumbles on. Still an important resource for this resource-poor nation, it is expected to provide 20–22% of electricity by 2030, under a new long-term energy strategy created in conjunction with Japan's pledge to the United Nations to cut greenhouse-gas emissions.

The journey since 2011 has been difficult, with policy controversies on every front. Many of the fraught decisions — on evacuation, clean-up, energy transition and disaster preparedness — were at the science–policy interface3. And scientists, especially those involved in giving policy advice, lost credibility and the trust of the public4.

Several initiatives have been launched to rebuild these crucial bridges. One such is an effort by the Japan Science and Technology Agency (JST) on research into scientific advice, and a 'deliberative polling' exercise in August 2012 involving the public that was used to inform the energy policy of the previous government. These efforts are yielding genuine progress, but slowly.

We strongly believe that the events and aftermath of 11 March highlighted a fundamental problem with research in Japan: weak connections between disciplines and between Japan's scholars and those working in other countries. In a nation that performs world-class research in conventional disciplines5, interdisciplinary scholarship lags, and Japanese researchers are keenly aware of this. Moreover, the nation's breadth of disciplinary coverage is narrower5 and the rate of international collaboration is lower than in comparable nations (see 'Build bridges'). 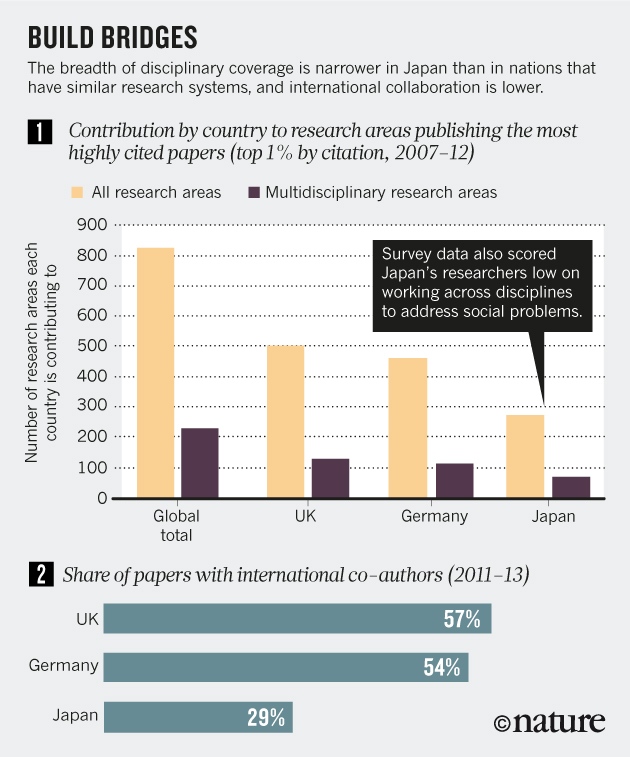 This has a particularly important implication for energy and environment research, which require the integration of diverse knowledge6, 7 that can come from anywhere in the world. During the Fukushima crisis, researchers who were not used to collaborating with other disciplines (or other nations) struggled to do so8.

What the disaster vividly demonstrated is that nuclear plants are susceptible to external events and that accident impacts are not contained — they may include the release of radionuclides, with dire environmental effects. The PRA has therefore been extended beyond nuclear engineering to cover disciplines ranging from seismology and geology to atmospheric science and ecological modelling.

Before 2011, such interdisciplinary PRA research in Japan was limited compared with other developed economies that have significant nuclear presence such as in the United States, the United Kingdom and France (see go.nature.com/sev71o; in Japanese). This was partly because the country did not require PRA for regulatory purposes. Under the new 2013 regulations, Japan mandated the use of PRA for nuclear plants and is now trying to catch up in this area.

The second example concerns innovation in renewable energy. Although many citizens would prefer the nation's energy portfolio to have a larger share of renewables, these are more costly in Japan than elsewhere, even for technologies such as solar photovoltaics, in which Japan was a pioneer.

Ideally, Japan should explore how each policy alternative might affect future cost trends for solar. Combining energy-systems analysis and policy analysis with technology forecasting methods (based on expert elicitation, bottom-up engineering analysis and learning curves that describe empirical relationships between cumulative production and cost reduction) would yield crucial insights. Such interdisciplinary studies in Japan are hard to come by. Because of the low level of global networking in these areas, international experiences are not widely appreciated in Japan either.

This has already affected the solar market in Japan. Under the feed-in tariff, developers rushed to install expensive solar devices, costing consumers trillions of yen that could have been saved by gradual installations made in tandem with cost reductions. In Germany, by contrast, there was a clear incentive for solar developers to reduce cost under its fine-tuned tariff scheme with frequent price adjustments.

Our critics will say that these issues are political, not academic. We feel that this attitude is the source of the problem. Engaged scholarship is a prerequisite for informed policymaking. Scientists and social scientists must do their part. 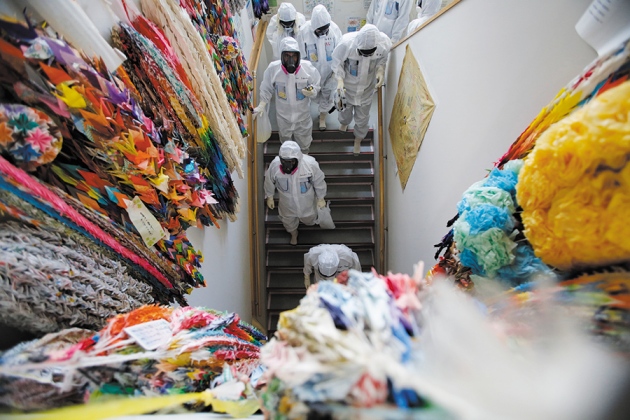 Employees, and thousands of paper cranes, inside the Fukushima plant three years after the accident.

Two big changes would go a long way to improving interdisciplinary research in energy and the environment in Japan. Going global is the key, and will pay dividends: Japan would leverage international expertise, and the rest of the world would learn from Japan's experiences.

Globalize the review process. Because of the small number of researchers engaged in interdisciplinary research, the pool of reviewers for academic journals and funding proposals is limited. In policy-relevant interdisciplinary research, particularly in energy and environment, publishers and granting programmes, such as the government-backed KAKENHI (Grants-in-Aid for Scientific Research), should make parts or all of their review processes international. The connections made could also boost international collaboration.

For strategic research in energy and the environment, funding agencies should require scientists to publish part of their results in international journals even for policy-oriented research, whose target readership obviously prefers Japanese to English. Many papers, although tailored to the policy context of Japan, would appeal to global experts because energy and environmental issues are global. Large-scale programmes of the science-and-technology ministry, and strategic research funds of the environment ministry, should take the lead. Because policymakers need deliverables to be communicated in Japanese as well, this will increase the burden on researchers, which should be reflected in their funds.

In April, Japan will start a new round of its Science and Technology Basic Plan, a cabinet-level, five-year policy on research and innovation. It is good to see that building an international researcher network is one of the key agenda items. Japan must make that vision into a reality.

Globalize research. Strategic, policy-oriented research programmes in Japan should be designed so that they can benefit from international experience and domestic experience can be shared globally. For example, the Collaborative Laboratories for Advanced Decommissioning Science (CLADS), established as a research base for the decommissioning of the Fukushima plant, should be more outward-facing.

“Going global is the key, and will pay dividends.”

Decommissioning involves many disciplines, including nuclear engineering, meteorology and oceanic-risk assessments, ecology and remediation. By soliciting international research proposals, CLADS should involve more researches from elsewhere in Asia, where many countries have nuclear ambitions, including China, South Korea, India and many southeast Asian countries. Working with overseas scientists, CLADS should publish some outcomes in English.

Another opportunity is Future Earth, a ten-year global sustainability research initiative that puts interdisciplinarity at the forefront alongside stakeholder engagement9. For its contribution, Japan should elevate energy research to a key component. Japan has several advanced energy technologies, but to move them into the market at scale requires outside input, particularly when it comes to innovation policy.

As Asia becomes the centre of the global energy economy, the time is ripe for Japan, as part of the Future Earth platform, to embark on a truly interdisciplinary and international project, and colleagues from neighbouring nations should do the same. Such initiative should receive rigorous academic oversight from an international advisory body.

This year is also the 30th anniversary of the Chernobyl nuclear accident. In Europe, and Germany in particular, that disaster spawned fresh thinking on many fronts. The German book Risk Society by Ulrich Beck, published in 1986 soon after the accident, explored how risks from technology and industrialization shape modern society.

The disaster catalysed a transition away from nuclear to renewables, which is now gathering renewed momentum, backed up by interdisciplinary studies on energy transformation. As in Germany in the late 1980s, Japan has seen many fresh attempts to carve out new directions for research, but so far such efforts have been fragmented and scattered, many along disciplinary lines.

Five years on from March 2011, problems abound. Fukushima and the Tohoku areas are yet to recover, and the transition towards renewables has been rocky. Most, if not all, of these issues are fundamentally political and socio-economic3. But scientists, social scientists and their funders must engage. Without better connections across disciplines and nations, the science–policy interface cannot improve. The people of Japan deserve better.