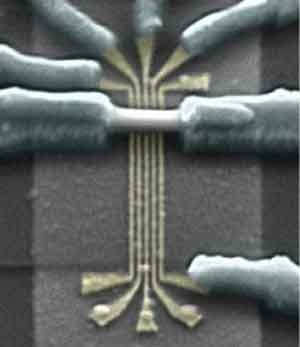 An electron micrograph of an indium antimonide nanowire (horizontal bar, centre) similar to that used to search for Majorana fermions.

Getting into nanoscience pioneer Leo Kouwenhoven’s talk at the American Physical Society’s March meeting in Boston, Massachusetts, today was like trying to board a subway train at rush hour. The buzz in the corridor was that Kouwenhoven’s group, based at the Delft University of Technology in the Netherlands, might have beaten several competing teams in solid-state physics — and the community of high-energy physicists — to a long-sought goal, the detection of Majorana fermions, mysterious quantum-mechanical particles that may have applications in quantum computing.

Kouwenhoven didn’t disappoint. “Have we seen Majorana fermions? I’d say it’s a cautious yes,” he concluded at the end of a data-heavy presentation.

Quantum particles come in two types, fermions and bosons. Whereas bosons can be their own antiparticles, which means that they can annihilate each other in a flash of energy, fermions generally have distinct antiparticles; for example, an electron’s antiparticle is the positively charged positron. But in 1937, Italian physicist Ettore Majorana adapted equations that Englishman Paul Dirac had used to describe the behaviour of fermions and bosons to predict the existence of a type of fermion that was its own antiparticle. Over decades, particle physicists have looked for Majorana fermions in nature, and after 2008, condensed-matter physicists began to think of ways in which they could be formed from the collective behaviour of&nbsp; electrons in solid-state materials, specifically, on surfaces placed in contact with superconductors or in one-dimensional wires.

Kouwenhoven’s apparatus is along the latter lines. In his group’s set-up, indium antimonide nanowires are connected to a circuit with a gold contact at one end and a slice of superconductor at the other, and then exposed to a moderately strong magnetic field. Measurements of the electrical conductance of the nanowires showed a peak at zero voltage that is consistent with the formation of a pair of Majorana particles, one at either end of the region of the nanowire in contact with the superconductor. As a sanity check, the group varied the orientation of the magnetic field and checked that the peak came and went as would be expected for Majorana fermions.

Although other groups have previously reported circumstantial evidence for the appearance of Majorana fermions in solid materials, Jay Sau, a physicist at Harvard University in Cambridge, Massachusetts, who attended Kouwenhoven’s talk, says that this is a direct measurement. “I think this is the most promising-looking experiment yet,” he says. “It would be hard to argue that it’s not Majorana fermions.”

Multiple schemes have been proposed in which Majorana fermions act as the 'bits' in quantum computers, although Sau cautions that it’s not yet clear whether those created by Kouwenhoven will be long-lived enough to be used in that way.

If the Delft group's result holds up, it not only represents an impressive coup in solid-state physics, but does so ahead of other approaches to creating Majorana fermions. For example, the neutralino, a hypothetical supersymmetric particle that could account for some or all of the Universe's dark matter, is thought to be a Majorana fermion. Some models suggest that neutralinos could be produced by the Large Hadron Collider at CERN, the European particle-physics laboratory near Geneva, Switzerland.