A long-running question about how the largest species of birds achieve erect penises seems to have been settled. In a study published this week in the Journal of Zoology1, researchers report that male ostriches and emus enlarge their penises using a burst of lymphatic fluid rather than a blood vascular system like that found in reptiles and mammals.

The finding, based on dissections, matches what is known about other species of birds — only 3% of which have penises — and could have important implications for the understanding of the shared, and divergent, evolutionary heritage of birds and reptiles.

The ostrich is one of very few birds to have a penis.

"Our findings reveal that the evolution of a lymphatic erection mechanism likely occurred in the ancestor of all birds rather than within birds," says Patricia Brennan, an evolutionary biologist at the University of Massachusetts Amherst and one of the authors of the study.

Ostriches and emus are members of the ratites, a group of flightless birds that also includes rheas and kiwis. All male ratites sport penises — as do ducks and some other species — but most birds mate instead with a brief 'cloacal kiss', during which the male passes sperm to the female through the cloaca, the same port used for excreting waste.

The existence of a lymphatic penis in some birds presents an evolutionary puzzle, says Richard Prum, an ornithologist at Yale University in New Haven, Connecticut, and co-author of the paper. “What is weird about birds is that they evolved not just a new structure, but a novel way to do something that was already being done,” he says.

It is a poorly explored area of avian anatomy, but speculation about the ratite penis dates back to at least 1836, when a German study suggested that it relied on blood for erection2. Only a handful of scientists attempted to follow up on that finding, but a 1923 study claimed that the mechanism was lymphatic3.

To settle the question, Prum and Brennan dissected the genitals of one adult ostrich (Struthio camelus) and three adult emus (Dromaius novaehollandiae). Both species turned out to have spongy, lymph-producing tissue, called paralymphatic bodies, just beneath the muscles that control the phallus. That is convincing evidence that the birds’ erections are controlled by the lymph system, the researchers say.

The origin of lymph-driven erections has yet to be uncovered. In ducks, says Brennan, it may reflect an “evolutionary arms race”. Male ducks often force sex on females to scatter their genes. Females have evolved complex anatomical defences against these unwanted attentions, but the lymphatic erection offers a way around these, because it allows a rapid on/off means of extending the penis and enabling deep insemination. 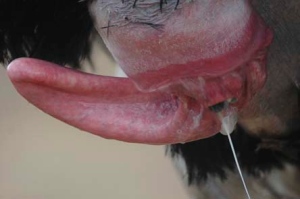 In ostriches and emus, the authors suggest, the system has a different role. Rather than elongating the penis, the lymph fluid may stiffen the organ while pushing semen towards the tip. The difference might reflect a different style of mating between the two, she says.

The ratites may have a different erection mechanism from reptiles, but their phalluses aren't so dissimilar, anatomically speaking. "It was thought that the avian penis was an evolutionary novelty, rather than a shared trait with reptiles, partly because of the avian lymphatic erection,” explains Brennan. “Although our findings might be considered to support this view, we actually find that there are a lot of similarities between the reptile and ratite penis — for example, in the density and configuration of the tissue that makes up the penis in ostriches and emus, and that they likely evolved from the same tissues."

Robert Montgomerie, an evolutionary biologist at Queen’s University in Kingston, Canada, says it is remarkable that nobody has looked at this until now. Because ducks, ratites and other species all use a lymphatic system, the study shows that it must have been present in the common ancestor of all birds. But that system probably evolved more recently than the blood vascular arrangement in other vertebrates, says Montgomerie. “I think the evidence is that the lymph system is divergent,” he says.

Brennan is now conducting a survey of penis morphology in all birds that have the organ, to learn what differences and changes over time might say about their function and evolution. She says that there seems to be a strong correlation between genital size and bird mating habits. Emus, for example, pair bond, and the males have small penises. Rheas, on the other hand, have much larger phalluses and are promiscuous. “I’m hoping that as I add more data, I’ll get at why that is,” she says.

Montgomerie adds that the most provocative thing about the research is not what it says about bird penises, but rather what it implies about the lack of them for the vast majority of birds.

“Darwin and others said that penises were primary sexual traits, meaning they’re essential for reproduction. But the birds say they’re not,” notes Montgomerie. Instead, he says, the penis may be a secondary sexual trait, helpful for stimulating the female, signalling reproductive fitness and even an aspect of competition among males — but not indispensable.