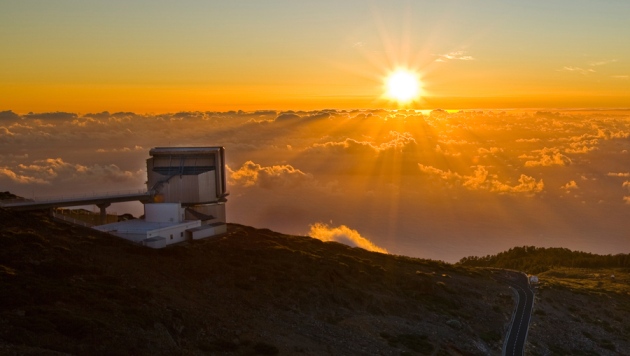 How many extrasolar planets has NASA’s Kepler mission discovered? That depends on how you count. Last month, the mission team published a catalogue that lists a staggering 2,321 candidate planets, amassed since May 2009 as the space-based tele­scope watches stars for the shadow of planets passing over their faces. Yet only 69 of them are considered confirmed planets. Astronomers have fretted over the growing backlog, but help is on its way.

For a Kepler planet to ascend from candidate to confirmed, a second method has to vouch for it: for example, a ground-based spectro­graph must report signs that the planet’s gravity is tugging its star back and forth. Yet Kepler looks north, whereas the instrument most sensitive to stellar wobbles, the European Southern Observatory’s High Accuracy Radial Velocity Planet Searcher (HARPS), is located at the La Silla Observatory in Chile and can only observe the southern sky. On 1 April, however, the Northern Hemisphere will get a near-clone of HARPS when HARPS-North achieves first light at the Italian 3.6-metre National Galileo Telescope (TNG) on La Palma in the Canary Islands.

The instrument has been a long time coming. Conceived in 2005, the project was originally led by Harvard University in Cambridge, Massachusetts. But in 2010, after Harvard’s endowment fell during the financial crisis, the University of Geneva in Switzerland took charge. Financial problems forced the group to switch from the 4.2-metre William Herschel Tele­scope, also on La Palma, to the TNG, which will give the HARPS-North team 80 nights of dedicated time per year for five years.

That should help to alleviate the bottleneck for Kepler candidates. Many astronomers, however, are looking to HARPS-North less for confirmation of the candidate planets than for insight into their properties. The false-positive rate for Kepler, after all, has already been shown to be less than 10% (T. D. Morton and J. A. Johnson Astrophys. J. (in the press) Preprint at http://arxiv.org/abs/1101.5630; 2011). “It has become acceptable to do a statistical analysis and say, ‘They are planets’,” says Joshua Winn, an astronomer at the Massachusetts Institute of Technology in Cambridge.

What Winn and others want to know is: what kind of planets? The stellar dimming that Kepler detects is a function of the planet’s size. The stellar wobble seen by instruments such as HARPS-North, by contrast, reveals a planet’s mass. With knowledge of both mass and size, astronomers can compute the planet’s density, which is the key to understanding the nature of the super-Earths — planets a few times the size of Earth (see ‘Sizing up the candidates’) — that are emerging from Kepler’s discoveries. “You really want to know if it’s a large Earth or a mini-Neptune or something different altogether, like a ball of water,” says David Charbonneau, a Harvard astronomer and a collaborator on the HARPS-North project. 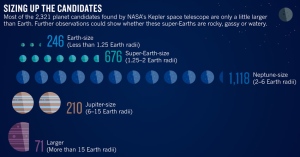 Until now, Kepler has relied for follow-up observations on an instrument on one of the twin 10-metre telescopes at the Keck Observatory atop Mauna Kea in Hawaii, which can detect a stellar wobble of about 150 centimetres per second — barely good enough to confirm super-Earths. HARPS achieves twice that sensitivity, and Francesco Pepe, principal investigator of HARPS-North at the University of Geneva, hopes that his project will do the same.

Kepler’s ultimate goal is to detect Earth-sized planets in Earth-like orbits, and for now, such true Earth analogues remain out of reach of ground-based detectors. (The Sun’s wobble owing to Earth is about 9 centimetres per second.) To achieve that sort of precision, astronomers want to fit ground-based spectrographs with high-frequency lasers that emit extremely short pulses of light at specific wavelengths spaced equally on the spectrum. These ‘laser frequency combs’ provide a way to calibrate a spectrograph and synch it to an atomic clock, which eliminates the error resulting from long-term drift of the spectrograph and could offer precision as good as one centimetre per second.

Ronald Walsworth, a physicist at Harvard, plans to take his group’s laser comb to HARPS-North later this year. A rival group at the European Southern Observatory is already testing a comb at HARPS.

But these efforts may be for nought. The roiling surfaces of stars jitter, creating a confounding noise in the measurement. It may be that only a small fraction of stars are calm enough for an Earth analogue to be discernible, says Walsworth. “Our future is in the stars,” he says. “We’ll do the science that the stars enable us to do.”