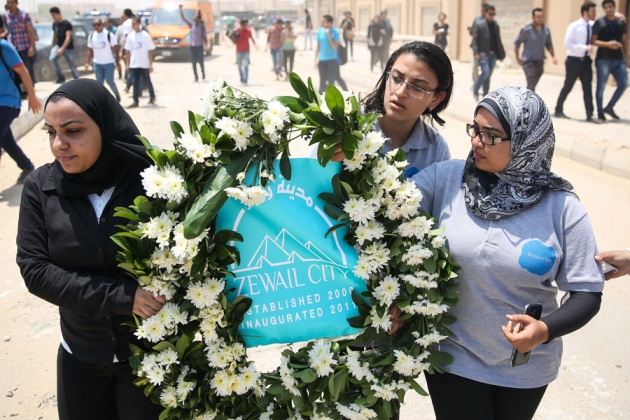 Mourners attend the funeral procession of Ahmed Zewail at the Zewail City of Science and Technology in Cairo.

Questions are swirling over the future of Egypt’s first science city, after the death of the Nobel laureate who made the project his legacy.

The Zewail City of Science and Technology, a campus outside Cairo comprising a non-profit university and several research institutes, is named for the man who spearheaded it: Egyptian-born US chemist Ahmed Zewail, the first Arab to win a science Nobel.

But Zewail’s death at the age of 70 last week raises fresh doubts about the research hub's already precarious finances. The institute had relied heavily on Zewail’s star name and contacts to attract the support of scientific luminaries and millions of dollars in donations and government loans. It is now running out of money, has not yet raised enough cash to support a planned move to a new campus and will probably have to rely on more state support, say researchers working there.

“Fundraising has always been a challenge, and I think it is likely to be affected by the loss of Dr Zewail in the short term,” says Sherif El-Khamisy, a molecular biologist at the University of Sheffield, UK, who is also director of Zewail City’s Center for Genomics. “But the logistical support envisaged from the state is expected to override the initial fear or uncertainty.”

Uncertainty has plagued Zewail City since its inception. While working at the California Institute of Technology in Pasadena, Zewail proposed in 1999 to found the university and technology hub near Cairo as a flagship science project, essential for Egypt’s research development. But it was not until 2011 that the institute launched — a delay that Zewail has ascribed to political instability and bureaucracy.

The young university was quickly plunged into controversy, after Egypt's first not-for-profit private research institution, Nile University — also outside Cairo — argued that it owned some of the buildings gifted to the science city. Nile University ultimately won the legal dispute — although it has allowed researchers from Zewail City to stay on in its buildings until a new campus is complete.

Zewail City began accepting students in 2013; it currently has more 500 students and 150 academic professors and researchers. The first class of students will graduate next year, many of whom have received scholarships to cover their tuition fees.

The project’s new campus is expected to be finished in 2019, at a cost of at least US$450 million; a first phase should be complete by July 2017, when many faculty and students are to move there. But Zewail City hasn’t raised enough money to finish even its first phase, says Sherif Fouad, a spokesperson for the institute.

To pay for scholarships and campus construction, it has almost used up the 700 million Egyptian pounds (around US$80 million) raised from donors; its other funding comes in the form of a 1-billion-Egyptian-pound loan from the ministry of defence, which ultimately must be paid back. A shaky economy and the widely expected devaluation of Egypt’s currency is not helping matters. 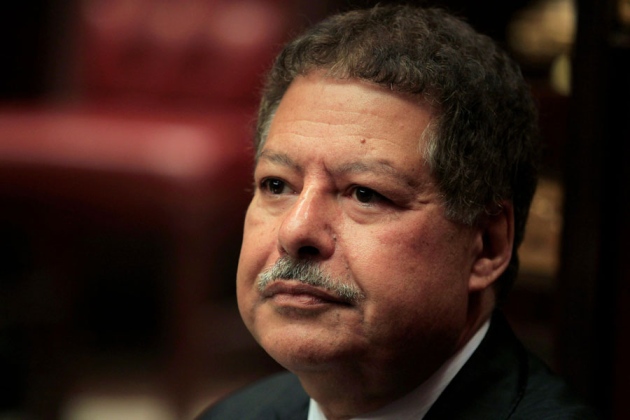 Nobel laureate Ahmed Zewail, who died on 2 August aged 70, was the founding force behind Egypt's Zewail City of Science and Technology.

El-Khamisy and others affiliated with the institute say they are hopeful that it will survive — not least because it has the verbal backing of Egypt’s president, Abdel Fattah el-Sisi.

In a speech on 6 August after Zewail’s death, el-Sisi asked Egyptians to continue to donate to the city, but vowed that Egypt’s armed forces — whose engineers are building the new campus — would finish construction even if no more money comes through.

“The president’s speech was very reassuring for us all that Zewail City remains a priority for the government and is considered one of Egypt’s national projects,” says Fouad.

It is likely that Egypt’s government will ultimately need to step in with support, says Salah Obayya, a physicist who is currently acting chairman of Zewail City until a replacement for Zewail is elected.

How the state deals with that intervention could affect whether the institute can maintain the support of scientists whom Zewail sought to attract, says Ibrahim el-Sherbiny, joint director of the institute’s Center for Materials Science. “If they feel the reassurance on the ground, they will remain and attract others because they loved Dr Zewail, and I am sure they would love to support him after his death,” he says.

Zewail City enjoys an unusual autonomy: unlike other Egyptian state-sponsored institutions, it has been granted a decree that allows the campus to outline its own structure and governance, guaranteeing its independence from the education ministry. Obayya says that he does not expect such autonomy to be affected by closer government intervention.

At a meeting on 8 August, Zewail City’s board of directors vowed that their pioneer’s “national mission” would carry on. British-Egyptian cardiac surgeon Magdi Yacoub of Imperial College London is widely tipped to take Zewail’s place at the head of the project, says Fouad.

“If Sir Magdi Yacoub is chosen to run the city, it will give the project the needed stability to soldier on,” says Sherif Sedky, a physicist and former academic president of Zewail City, who is now provost of the American University in Cairo.