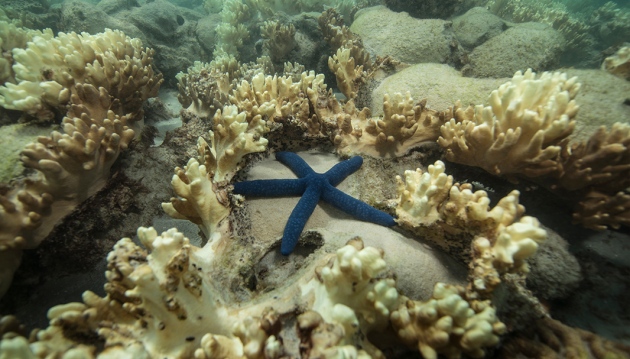 The World Climate Research Programme (WCRP) likes to think ahead. Even its fast-track initiative on near-term climate prediction talks in terms of decades — as does much of the science of climate change. To iron out seasonal variation and say something sensible about future events needs time. But how much time do we have? And in the face of severe budget cuts, for how much longer can the WCRP continue its work?

There is a reason why melting glaciers became an overused motif during the years of peak political and media interest in climate science a decade or so ago. Most of the other predicted severe impacts — on species, sea level and human welfare — were locked away for the future. Now, picture editors looking for contemporary signs of a warming world have a new subject: Australia’s Great Barrier Reef. For the second year running, the reef has been severely damaged by widespread bleaching, an event usually caused by high water temperatures. Aerial surveys last week confirmed the bad news, and conservationists and researchers are now working to judge the extent of the latest damage — which might not be known until the end of the year.

Coral reefs are a long-trailed casualty of a warmer climate, and an early warning of what might follow. But the oceans are complicated places, and how, where and when more disruption — to other marine ecosystems, for instance — might emerge is difficult to predict.

That’s where the WCRP has proved its worth. In spite of its grandiose name, the programme is a small cog in the global climate-science wheel. But seed and glue money provided by the WCRP, funded mostly by the World Meteorological Organization (WMO) and national sponsors, have leveraged collaborative research to thoroughly transform scientific understanding of Earth’s climate system.

“The multifaceted science of climate change is not yet settled.”

The WCRP’s small budget has been falling, and is set to fall further, from an allocation from the WMO of 1.7 million Swiss francs (US$1.7 million) in 2016 to 1.4 million Swiss francs in 2017. For some projects, that will translate into swingeing cuts: the budget for meetings of the programme’s group for stratosphere–troposphere processes, for example, which has already been cut heavily in the past three years, will probably be halved from last year, to about $30,000 this year. Meanwhile, the operational budget allocated to the group for climate and ocean variability, predictability and change is set to decline even more drastically. The cuts mean that these and other core projects will need to substantially reduce their activities.

In essence, a community-building programme, WCRP-funded meetings and project-planning activities have been the nucleus of international climate-research efforts. The programme promotes research linked to seven ‘grand challenges’ in Earth-system science and climate-impact research, including climate sensitivity to rising greenhouse-gas concentrations, carbon feedbacks and sea-level rise.

The WCRP also plays a major part in assessing the reliability of model-based climate predictions such as those used by the Intergovernmental Panel on Climate Change (IPCC). At a relatively small cost, it thus provides a mechanism to promote and coordinate international climate research. And, crucially, it supports the involvement of scientists from developing countries, many of whom might otherwise not be able to attend key international climate meetings.

The climate-research agenda, of course, must itself change as the science advances and as international climate policies gain pace. But drastic cuts to the WCRP’s already modest budget threaten to exclude scientists, in particular those from less privileged countries.

If the WMO cannot be convinced of the need to reverse the cuts — and scientists should lobby for them to do so — national funding partners should step in with the money to prevent a looming paralysis at the WCRP. Strangling an agenda-setting climate programme that, since its launch in 1980, has provided remarkably good value for relatively little money would be a demotivating signal at a time when indifference and complacency about climate change are on the rise. In the United States, the admini­stration of President Donald Trump is currently considering what might be devastating cuts to the budgets of the Environmental Protection Agency and the National Oceanic and Atmospheric Admini­stration. Lack of support for the WCRP  would send a troubling signal that other international efforts — the IPCC included — are not valued either and could face a similar crunch.

The fate of the Great Barrier Reef, once again, illustrates the value of continued research. Just this week, Nature publishes an assessment of the bleaching threat (prepared before the most recent news). The researchers assessed three major bleaching events to strike the reef: last year’s and others in 1998 and 2002. By analysing individual reefs, the study shows how some corals are more prone to bleaching than others and confirms that the distinctive geographical footprint of bleaching is mainly driven by patterns of ocean surface warming. More unbleached areas were located towards the southern end of the reef, where waters are generally cooler. Local management of reef fisheries and water quality offered little or no protection against extreme heat, the scientists say, yet could perhaps help these ecosystems to recover.

All of this shows how the multifaceted science of climate change is not yet settled. The WCRP’s grand challenges must be vigorously addressed. And as most nations prepare to implement the Paris climate agreement, new challenges will arise with regard to monitoring and policy verification. The programme must be able to continue to provide guidance on how existing science is best used. It has been a mouthpiece for a discipline that must compete for talent and public awareness with more prestigious and more generously funded fields. Its slow liquidation would be a gift to those who like to argue (wrongly) that climate science is no longer in demand.