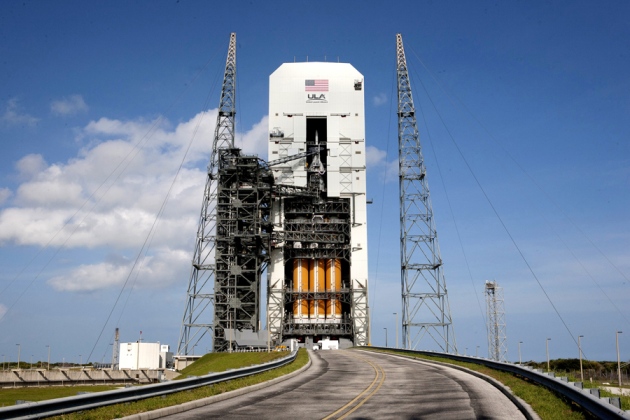 If all goes well, Orion will make nearly two orbits of Earth during its 4.5-hour test flight.

On 4 December, in the early morning light of Cape Canaveral, Florida, engineers plan to launch NASA’s Orion spacecraft on its first major flight. If the US$370-million test goes as planned, Orion will soar to a distance of 5,800 kilometres above Earth — the farthest anyone has sent a human-spaceflight capsule since Apollo 17 returned from the Moon in 1972.

Orion will not be carrying any astronauts on this flight, which is meant to test systems such as its electronics and heat shield. But NASA intends the craft — built by Lockheed Martin — to be the backbone of future human deep-space exploration. Nature looks at where Orion came from and where it might one day take astronauts.

The wedge-shaped Orion capsule is the heart of a system designed to send NASA astronauts to the Moon, Mars or other destinations in deep space. It got its start under President George W. Bush, who announced in 2004 that NASA would be sending astronauts back to the Moon and, eventually, to Mars. The rocket and crew capsule that ferried Apollo astronauts to the Moon had been discontinued in the 1970s, so NASA began building a new rocket and crew capsule from scratch.

But in 2010, President Barack Obama cancelled those plans to return to the Moon. He said that NASA would instead send astronauts to an asteroid as a stepping stone to Mars. Even though the deep-space destination had changed, the agency kept working on Orion.

So is this the replacement for the space shuttle?

No. The space shuttle flew on short trips in low Earth orbit, including back and forth to the International Space Station a few hundred kilometres up. NASA retired the space shuttle in 2011 and is moving towards using commercial aerospace companies to fly astronauts to the space station. In the meantime, the agency is buying its astronauts rides there and back on Russian space vehicles.

How is it different from the Apollo capsule?

Orion can carry up to six astronauts, compared with Apollo’s three. Many of the technologies are inherited from the Apollo days, but with significant upgrades. For instance, Orion's computers will be state of the art — which also makes them more vulnerable to radiation damage. “Even though it will be going through the same region of space [as Apollo], it has different capabilities and will have different reactions,” says Mark Geyer, Orion programme manager at NASA’s Johnson Space Center in Houston, Texas.

What is this week’s test about?

It will be the first time Orion has flown in space. Key tests include how it will survive passing through Earth’s radiation belts, and then how it will cope with the blazing heat of re-entering the atmosphere. Engineers have previously done laboratory and field tests, such as dropping the craft out of an aeroplane to test its parachutes, and used computers to model what they think might happen. But they need actual data from a real spaceflight to understand whether they need to tweak Orion's design.

How far will Orion fly?

Launch is scheduled for 7:05 a.m. local time in Florida, on a Delta IV Heavy rocket that is the most powerful launch vehicle currently available. Orion will first settle into a temporary orbit, looping as far as 888 kilometres above Earth. Two hours after launch, a major rocket burn will send Orion thundering much higher, on its way to 5,800 kilometres up.

Orion will pass twice through the Van Allen radiation belts, where energetic particles will bombard the spacecraft. One major goal of the test is to see how the spacecraft systems survive radiation, which is a much bigger problem for astronauts on deep-space missions than for routine runs up to the space station. “It is a big deal to get out beyond the Van Allen belts and out into that space environment,” says Mike Hawes, programme manager for Orion at Lockheed Martin in Denver, Colorado.

As it heads back to Earth, Orion will travel through the atmosphere at about 32,000 kilometres per hour, and frictional heating will raise its temperature to almost 2,200 °C. To compensate, its 5-metre-wide heat shield — the largest of its kind ever built — is made of a material that will burn away on re-entry instead of transferring heat to the rest of the structure.

Orion will deploy parachutes and splash down in the eastern Pacific Ocean. The whole flight will last for 4.5 hours, making nearly two complete orbits of Earth.

When will Orion start carrying astronauts?

Not for a while. Orion needs a heavy-lift rocket also under development, called the Space Launch System (SLS), to make it all the way to deep space. The first full test of the Orion–SLS pairing is likely to happen in 2018, but without astronauts.

The first crewed flight could come by 2021, perhaps to a spot in space beyond the moon.