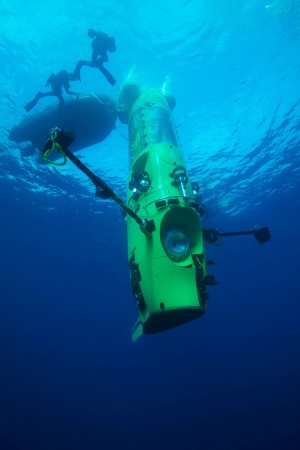 The DEEPSEA CHALLENGER submersible will travel more than 10 kilometres down, to the very bottom of the Pacific Ocean.

The director who once jokingly proclaimed himself the “king of the world” is about to become the master of the depths. If all goes to plan, James Cameron, director of the 1997 blockbuster Titanic, will soon use his own unique submersible to become the first person since 1960 to reach the deepest place in the ocean. But although most attention will be focused on the boldness of the engineering feat, his expedition includes a substantial scientific component aimed at better understanding one of the world’s most extreme and least studied environments.

“The goal of all this is not just to set records and do grandstanding dives,” Cameron told Nature just hours before heading to sea. “We want to push the envelope not only of scientific knowledge but also of engineering.”

Challenger Deep is a gash more than 10,900 metres deep in the Mariana Trench, off the coast of the Philippines in the Pacific Ocean. The first and so far only humans to make it to the bottom were Jacques Piccard, a Swiss oceanographer and engineer, and Don Walsh, then a US Navy lieutenant. They made their deep trek in the bathyscaphe Trieste, a primitive craft that went straight down and back up and has long since been decommissioned. Only unmanned remotely operated vehicles — the Japanese Kaiko in 1995 and the US Nereus in 2009 — have been to the bottom since.

Tools for the trench

Cameron built his sub, the DEEPSEA CHALLENGER, in Australia, and has not released how much money he spent on construction or the expedition. It has space for only one cramped person in its unusual 7.3-metre-tall vertical design, which streamlines the dives and ascents. A large bank of lights above the spherical cockpit will illuminate the depths for filming documentaries he'll produce in collaboration with National Geographic.

The sub's scientific tools include a water sampler, a sediment collector, a slurp gun for grabbing animals, and a robotic manipulator arm. The team will also deploy three ‘landers’ that sink to the sea floor unattended then rise on a timer or remote signal. One lander carries video cameras and baited animal traps, another collects water samples and a third — which the team is still working to complete — will snatch samples of sediment.

“We have a weather window and we’re punching out in a few hours,” Cameron said on Monday, speaking from Guam, the territory closest to the trench. He hopes to be on the bottom of Challenger Deep by Wednesday. Cameron also hopes to dive in nearby Sirena Deep, which is only a few metres shallower and is located in the US Marianas Trench Marine National Monument.

Tim Shank, a deep-sea biologist at the Woods Hole Oceanographic Institution in Massachusetts and a co-leader of the unmanned Nereus mission, was one of several scientists whom Cameron consulted to establish research plans for the dives. He says that any samples from the trenches will be “highly valued” by scientists because work in Challenger and Sirena has been severely limited.

Creatures of the deep

There may not be too much biology to observe, however: Nereus found only six animal species during its work in Challenger Deep. These included worms, sea cucumbers and crustaceans called amphipods. “There’s not a whole lot of diversity in that system that we can see,” says Shank.

The deepest that a fish has ever been documented is about 8,370 metres1. Piccard and Walsh reported seeing a flatfish in Challenger, but a cloud of silt obscured their view during their 20 minutes on the bottom so they weren’t able to take any photographs.

Jeffrey Drazen, a deep-sea fish biologist at the University of Hawaii at Manoa who has also consulted with Cameron, strongly doubts the existence of fish so deep. He says there are physiological reasons that fish probably can’t survive much below 8,000 metres. But Drazen hopes that the expedition will return with fish from below 4,000 metres — the deepest that he and his colleagues have been able to collect samples from — so that he can analyse the chemical adaptations that allow survival under high pressures.

Even without fish, there will be plenty to explore at the sea floor. Researchers including project chief scientist Doug Bartlett, a marine microbiologist at the Scripps Institution of Oceanography in La Jolla, California, will run genetic analyses on bacteria and other organisms plucked from the depths to learn how they are able to withstand the pressure; the topic interests not only oceanographers, but also astrobiologists who are seeking to understand the bounds of life. Video analyses will offer information about animal distributions.

And rock and sediment samples could help researchers to answer a host of geological questions about the subduction processes in which one tectonic plate slides under another, which were responsible for the trench's formation.

Bartlett says that the Cameron expedition differs from his usual academic work: research plans are less firmly established, and he doesn’t get the best cabin on the ship. But he says there are incredible perks, including working with an extremely well equipped and talented group of engineers that can fabricate in days equipment that might normally take months.

Bartlett adds that Cameron’s celebrity should also be invaluable in getting people interested in the deep sea. “I think there will be kids dreaming of the possibility of going into engineering and oceanography and all sorts of science fields as a result of what Jim has catalysed.”

Cameron is hoping these that initial dives are just a start, because the current state of ocean exploration is “piss poor”, to his mind. “I think we’ve got to do better,” he says. “If it means getting private individuals together with institutions and bypassing the whole government paradigm, that’s fine. Maybe that’s what we need to do.”