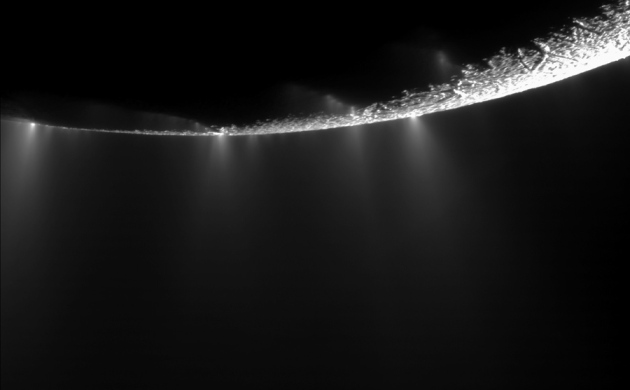 Planetary scientists have found an ocean buried beneath the south pole of the Saturnian moon Enceladus by studying tiny anomalies in the flybys of the Cassini spacecraft. The discovery, which helps to explain earlier observations of geysers, makes Enceladus only the fourth Solar System body found to have a water ocean — making it a potential cradle for life.

In 2005, NASA's Cassini spotted a plume of water vapour and ice spraying from the south pole of the 500-kilometre-wide body. The new findings show the likely source of this water: a 10-kilometre-thick layer of liquid — similar to the depth of the Mariana Trench, the deepest point in Earth's oceans — covering much of Enceladus’s southern hemisphere and capped by 30 to 40 kilometres of ice.

“It all fits into the picture that we’ve been working on for so long,” says Carolyn Porco, a planetary scientist at the Space Science Institute in Boulder, Colorado, who was not involved in the work. “It’s a great confirmation.”

The discovery boosts the odds that Enceladus could harbour extraterrestrial life. A picture is emerging in which Saturn’s gravitational pull provides energy, in the form of tidal flexing, to water deep within Enceladus. Some of that water pushes upward, and out through cracks in the moon’s ice shell, carrying organic molecules and other life-friendly components onto the surface and into space. Cassini has seen 101 liquid jets so far, and has detected organic molecules and salts in the plume they make up.

“This finding gives us evidence for a much larger, longer-lived reservoir of liquid water that the plume is presumably feeding from,” says Jonathan Lunine, a planetary scientist at Cornell University in Ithaca, New York. He and his colleagues describe the ocean's discovery today in Science1. 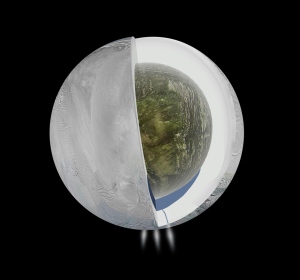 A reconstruction of the interior of Enceladus showing an ice outer shell, a relatively low-density rocky core, and a southern-hemisphere water ocean in between.

The Cassini gravity measurements come from three close flybys between 2010 and 2012, two of them over Enceladus’s south pole and one over its north pole. The researchers expected to see a weaker gravitational field at the south pole than at the north, because of a depression in the southern hemisphere. But the field was not quite as weak as they expected based on the topography. To compensate for this, the scientists say, there must be an underlying layer of something denser than ice. “The natural way to do this is to have a layer of water, because water is more dense than ice,” says team member David Stevenson, a geophysicist at the California Institute of Technology in Pasadena.

The scientists envisage a rocky core for Enceladus, about 200 kilometres in radius, covered with water and then ice. The water layer might cover the entire moon, or more probably exists as a regional sea in just the southern hemisphere. It is as least as broad as Lake Superior, the largest of North America’s Great Lakes, but much deeper.

It is unclear why Enceladus’s water seems concentrated in the south, says team leader Luciano Iess, an aerospace engineer at the Sapienza University of Rome.

Another question is how long the Enceladus ocean might have existed — whether it has been around since the birth of the Solar System or formed more recently — and whether it is slowly freezing to death or destined to last a long time. At nearly 1.5 billion kilometres from the Sun, Enceladus has very little to keep it warm. Temperatures on the surface get as chilly as –200 °C or so; some other source of energy, such as frictional heating from tidal forces, must be involved.

Porco thinks that Enceladus is releasing heat from within. She and her colleagues have calculated that water rising from the buried ocean will take about a week to reach the surface, and that its upward motion will keep any cracks at least 1 metre wide from freezing shut. Vapour in the rising plume condenses out in the upper 30 metres of the crack, she suggests, and that deposition of heat keeps the ice fractures open.

At the bottom of the Enceladus ocean, the water presumably comes in contact with the moon’s rocky core. “What matters about the new result is they say they have evidence for the ocean contacting rock,” says Christopher McKay, an astrobiologist at NASA’s Ames Research Center in Moffett Field, California. “That’s very important because pure water is not interesting biologically — the water needs to interact with rock in order to put in the stuff that’s useful for life.”

On Earth, for instance, hot water from sea-floor hydrothermal vents interacts with rocks to generate chemical reactions and nutrients that life can feed off. Enceladus may well have similar molecules at the bottom of its ocean, McKay says. Cassini has spotted tiny silica particles in the Enceladus plume, which may be fragments of the rocky core that could carry nutrients.

If the mission receives a final round of funding as expected (see 'NASA missions bid for extensions'), Cassini is slated to swoop past Enceladus three more times in late 2015. One of those fly-bys would include a dive through the vapour plume to sample it. And because the Saturn system is moving towards summer, the south pole of Enceladus is now totally dark and the thermal instruments on board Cassini will be able to see whether any heat is coming from between the ice fractures, says Porco. Such a measurement could reveal more about the factors that power the Enceladus plume.

Meanwhile, McKay has been working with colleagues in Japan to develop mission concepts for returning a sample of the plume. Many have been pushing for any kind of targeted probe to Enceladus2. “If you really want to know soon whether we have the possibility of life elsewhere in the Solar System, the most promising place to look is Enceladus,” says Porco. “We’re at the level of knowledge that no other icy target has.”

In the near term, though, any NASA-led mission to Enceladus may have to take a back seat to a mission to Europa, one of Jupiter's moons that also has a buried water ocean. Under pressure from the US Congress, NASA has been putting money into exploring possible missions there. At 3,100 kilometres across, Europa is much larger than Enceladus.

Last December, planetary scientists reported spotting water plumes on Europa much like those seen on Enceladus (see 'Hubble spots water spurting from Europa'). But when they looked again at Europa in January and February with the Hubble Space Telescope, hoping to see them again, they turned up nothing. 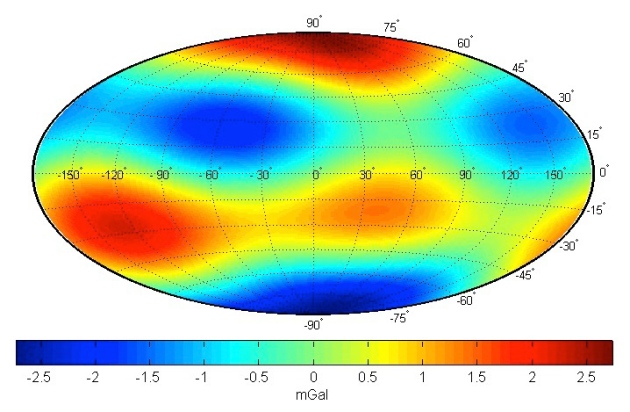 The lopsided strength of Enceladus's gravitational field, estimated using the acceleration of the Cassini probe (measured here in milligals, or thousandths of a centimetre per second squared).