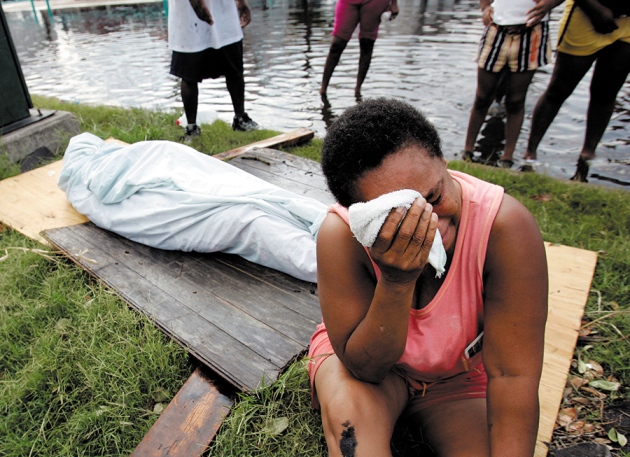 Some of the people who survived Hurricane Katrina lost loved ones, and many were made homeless by the storm.

New Orleans still bears the scars of Hurricane Katrina, ten years later. More than 500,000 people fled when the storm hit, and many never returned. Large swathes of the city are sparsely populated, particularly in the poor neighbourhoods that suffered the most severe flood damage.

Psychological scars linger, too. Many hurricane survivors continue to experience mental-health problems related to the storm, whether or not they returned to New Orleans, say researchers tracking Katrina’s psychological aftermath. Such work could ultimately aid people affected by future disasters, by identifying factors — such as lack of a social-support network and unstable environments for children — that seem to increase risk of mental-health trauma.

“What’s unique about this disaster is the magnitude of it,” says Joy Osofsky, a clinical psychologist at Louisiana State University in New Orleans. Katrina, a category 3 hurricane when it made landfall on 29 August 2005, ultimately damaged an area the size of the United Kingdom. In New Orleans, it destroyed basic resources such as schools and health clinics to a degree unparalleled in recent US history.

Osofsky saw the devastation and despair first hand. With their clinics flooded after the storm, she and other mental-health experts set up treatment centres for emergency responders on cruise ships docked nearby on the Mississippi River, and an emergency psychology unit at the city’s central command centre. Osofsky says that the centres treated thousands of displaced and traumatized people.

Some residents reported watching corpses float by as they waited to escape their flooded homes. Families were separated as emergency responders herded people into temporary holding centres, and police wielding guns prevented newly homeless people from crossing a bridge to escape the city. “There were so many ways in which common humanity was shut down by dystopian images and rumours,” says Jean Rhodes, a clinical psychologist at the University of Massachusetts in Boston.

At least one study of storm-ravaged areas in Alabama, Louisiana and Mississippi suggests that mental-health conditions, such as post-traumatic stress disorder (PTSD) and depression, worsened over time1. The prevalence of PTSD in these regions rose from 15% a few months after the storm to 21% one year later, and the proportion of people experiencing suicidal thoughts more than doubled from 2.8% to 6.4%. Robert Ursano, a psychiatrist at the Uniformed Services University in Bethesda, Maryland, says that this reflects the difficulties that survivors faced when trying to cope with loss or meet basic needs, such as finding housing.

“There was a level of uncertainty about whether or not recovery would be possible that I don’t think has been encountered before in the United States,” says Elizabeth Fussell, a demographer who was working at Tulane University in New Orleans when the storm hit.

Rhodes argues that simple steps might have mitigated the mental-health toll. Studies reveal that people who had strong social-support networks when Katrina hit were more resilient to psychological trauma2. Yet in many cases, officials’ actions severed such ties; many residents of flooded, poor areas were sent by bus to randomly assigned US cities, for example. Sorting evacuees into shelters by neighbourhood could be one way to prevent this stress, says Rhodes.

Rhodes has a rare perspective on the factors that influenced mental and physical health following the storm. In 2003, she and her colleagues had begun to study whether giving college scholarships to a group of 1,019 low-income New Orleans parents would increase their well-being. Katrina halted this work, but the researchers were able to use the already-collected medical and demographic data to track changes in health caused by the hurricane. Such baseline data are rare in disaster research, and are especially valuable for study­ing poor communities, which tend to have high rates of stress and mental illness.

The renamed, refocused Resilience in Survivors of Katrina (RISK) Project still follows many of the original study participants. Nearly half of the 392 low-income parents participating in the revised project had symptoms of PTSD one year after the hurricane, and the rate of other serious mental illnesses such as depression and psychosis doubled to 14% (ref. 3).

But these storm survivors ultimately displayed resilience. About one-third reported ‘post-traumatic growth’: the feeling that surviving the disaster made them stronger, even if they simultaneously experienced from mental illness. Three years after the storm, the RISK team found that two-thirds of the 386 African American women who participated in the original study no longer displayed the signs of psychological distress that were evident just after Katrina hit4.

“People kind of see disasters on TV and say, ‘How are these people ever going to build their lives again?’” Rhodes says. “We see that the vast majority of people over time bounce back.”