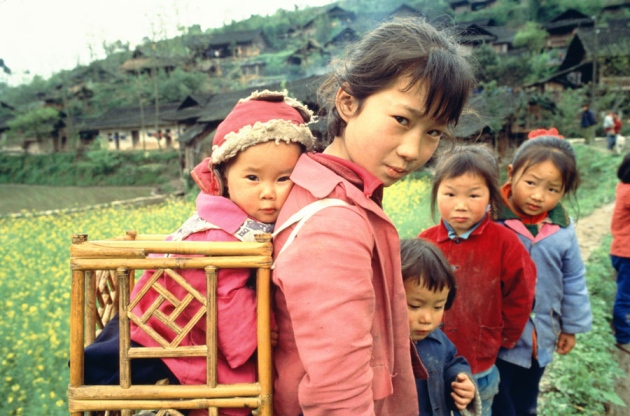 Numbers of girls dropped more slowly than those of boys in China during the famine of the early 1960s.

When food is in short supply women are more likely to bear daughters than sons, suggests an analysis of one of the most disastrous famines in modern history.

Shige Song, a sociologist and demographer at the City University of New York, analysed data from more than 300,000 Chinese women who gave birth between September 1929 and July 1982. This period included the Great Leap Forward famine, which resulted in millions of deaths and was linked to efforts by Chinese leaders to boost industrial productivity by means including ordering workers off the land.

Starting just over one year after the beginning of the famine, Song found a sharp dip in the proportion of boys being born — falling from 109 boys born for every 100 girls in April 1960 to 104 boys for every 100 girls by October 1963, about two years after the famine ended. The ratio did not return to pre-famine levels until around July 1965.

Song's analysis, published in the Proceedings of the Royal Society B1 today, supports the sex-ratio adjustment hypothesis — the idea that species alter the sex of their offspring in response to environmental conditions. Unhealthy, poorly nourished males tend to have fewer offspring than similarly undernourished females, so the hypothesis predicts that, to keep populations up in times of famine, women should give birth to fewer boys.

Studies in animals including red deer2 have already lent weight to the hypothesis, but until now the evidence in humans has been “much less clear”, says Song. Findings from earlier studies of famines — the 1944–45 Dutch Hunger Winter3, 4 and the severe food shortages during the siege of Leningrad in the Soviet Union in 19425 — have been inconsistent.

Song thinks that he was able to observe the effect clearly in the Chinese famine because the food shortage was more severe, ran for longer and, crucially, affected many more people than previously studied famines, giving him a much larger data set to work with. The analysis also gives an insight into the time required to trigger the effect — about a year at minimum, he says.

Reasons for the ratio

The data that Song analysed were collected in 1982 as part of the national one-per-thousand-population fertility survey by the Chinese State Family Planning Commission, which asked women about their entire childbearing history. The survey's accuracy depends on the women reporting the sex of their children correctly, notes Song, but he thinks that they would be unlikely to forget or lie about such a thing.

Song adds that China's one-child policy — which was introduced in 1978 and has skewed sex ratio at birth to favour boys, who bring greater economic advantage to their families — is unlikely to have influenced the results. The policy was in its very early stages when the data were collected, he says, and ultrasound technology that would allow parents to learn the sex of the baby before birth and opt for selective abortion was not widely available at the time.

“I am convinced that the change of sex ratio shown in the study is causally related to famine exposure,” says Cheng Huang, a demographer and population economist at Emory University in Atlanta, Georgia. However, malnutrition may not be the sole cause of the dip, he says. Increased psychological and physical stress were also “well documented” during the Great Leap Forward campaign, he says, and may have had a role.

“At this point we don't know the reason for the dip,” says Lambert Lumey, an epidemiologist at Columbia University in New York. He suggests that Song could make a stronger case if, rather than looking only at the population as a whole, he also examined male–female birth ratios in specific Chinese regions that were exposed to the famine at different times.

Song hopes to explore that avenue using data from a 1988 survey. That study should also shed light on how the one-child policy has affected natural patterns, he says.