Update: After launching on 17 February, ASTRO-H has reached its intended orbit, says the Japan Aerospace Exploration Agency. The agency also says that it has renamed the craft Hitomi, the Japanese word for the pupil of the eye. Hitomi will remain in a ‘critical operation phase’ until 28 February; this will include tests of onboard navigation systems and of the deployment of its solar panels.

Astronomers around the world are hoping that the third time will be the charm as Japan prepares to launch its largest space observatory ever. The telescope will use X-rays to study phenomena from black holes to dark matter and carries cryogenic imaging technology that flew on two previous missions — but met disaster both times.

Weather permitting, a Japanese-built H-IIA rocket is scheduled to launch the probe, provisionally named ASTRO-H, from Tanegashima Space Center at 17:45 local time on 12 February. Once in orbit, the 2.7-tonne probe will stretch out to its maximum length of 14 metres, including a 6.4-metre boom that will host an imager capable of collecting high-energy, or ‘hard’ X-ray photons (see ‘Spectra in space’). The Japan Aerospace Exploration Agency (JAXA) leads the mission with an investment of ¥31 billion (US$265 million), but there is also major participation from NASA, as well as institutions in six other nations and the European Space Agency (ESA).

Studying X-ray emissions is the best way to observe a wide range of cosmic phenomena, from galaxy clusters to the super-heated accretion disks around black holes. But Earth’s atmosphere is mostly opaque to radiation outside the visible spectrum, and particularly to X-rays and γ-rays, meaning that most X-ray astronomy requires a satellite. 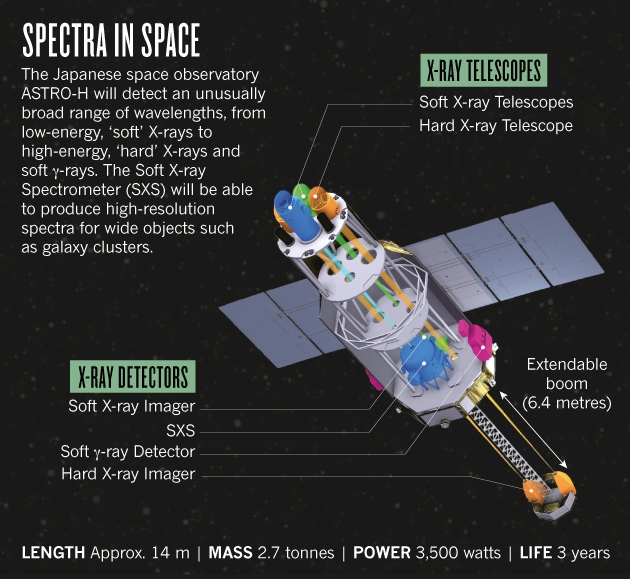 The major existing X-ray satellites are NASA’s Chandra X-ray Observatory and ESA’s XMM-Newton, which both launched in 1999. These can analyse the constituent wavelengths of X-rays — the spectra — emitted by point-like objects such as stars. But ASTRO-H will be the first to provide high-resolution spectra for much more spread-out X-ray sources such as galaxy clusters, says Norbert Schartel, project scientist for XMM-Newton at ESA’s European Space Astronomy Centre outside Madrid, who is also a member of ASTRO-H’s ESA team.

Spectra carry information about the velocity and turbulence of the plasma that pervades galaxy clusters, which in turn can reveal whether, and how, a cluster resulted from a merger of two smaller ones, says Christine Forman, a high-energy astrophysicist at Harvard University in Cambridge, Massachusetts. X-ray pictures of clusters, when combined with visible-light images, have also previously provided striking — although indirect — evidence for the existence of dark matter. ASTRO‑H should be able to help settle whether a 3.5-kiloelectronvolt X-ray signal seen in certain galaxies is a signature of dark matter decaying into photons — or something else, says Alexey Boyarsky, an astrophysicist at Leiden University in the Netherlands who co-discovered the signal.

ASTRO-H will also cover a broader range of wavelengths than most other missions, from ‘soft’, low-energy photons starting at 300 eV, through hard X-rays and right up to soft γ-rays of 600 keV. But only the soft X-rays will have their spectra imaged to high resolution. At the heart of the instrument responsible for this — the Soft X-ray Spectrometer (SXS) — is an array of 36-pixel elements that must be kept at 0.05 degrees above absolute zero, well inside the main body of the craft. When a photon strikes one of the sensors, the temperature of the sensor rises slightly, causing its electrical conductivity to increase. The resulting change in voltage can be used to measure the energy of the original photon — and therefore its wavelength — with a precision of nearly one part in 1,000. 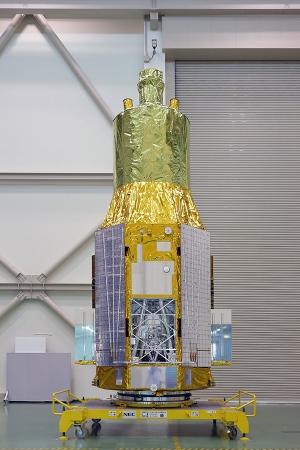 The ASTRO-H probe is preparing for launch.

The technology first took shape in 1984, when Richard Kelley, an astrophysicist at NASA’s Goddard Space Flight Center in Greenbelt, Maryland, started designing sensors for Chandra. After NASA scaled back its ambitions for the observatory and scrapped that plan, Kelley and his team provided the spectrometer for a Japanese X-ray telescope called ASTRO‑E. But in 2000, the rocket that was supposed to put it into orbit crashed shortly after take-off.

JAXA prepared a replacement mission, Suzaku, which reached orbit in July 2005 — only for disaster to strike again. The liquid helium used to keep a spectrometer’s sensors cold has to be slowly released, or outgassed. But in Suzaku, a tiny amount of that helium accumulated inside the craft. This was enough to ruin the vacuum that was supposed to insulate the helium tank from the rest of the craft. The tank heated up faster than expected, causing the helium to boil off and vent into space within four weeks of launch. Unable to stay super-chilled, the spectrometer was crippled before it could start making observations, although Suzaku’s other instruments continued to operate until the craft was decommissioned in 2015.

For ASTRO-H, JAXA redesigned the tank with plumbing to outgas the helium straight into space. And to further guard against glitches, ASTRO-H project manager Tadayuki Takahashi, an astrophysicist at the University of Tokyo and ASTRO-H’s project manager, pushed his collaboration to work without borders. “Usually, international co­alitions have clearly defined interfaces,” with different laboratories providing isolated components of a spacecraft and its payload, says Takahashi. But ASTRO-H researchers regularly visited each other’s labs, sometimes for months at a time.

Kelley says that Takahashi forged a very open collaboration. “Tad understands that if you want to maximize the chances of success, you have to have no barriers,” he says. “Everybody has access to everything.”

Astronomers around the world will be allowed to request observing time with ASTRO-H. Each team will have exclusive access to the resulting data for one year, after which JAXA will make them publicly available — a model long adopted by NASA. ASTRO-H will be renamed after launch, although what it will be called is yet to be determined.

A larger, higher-resolution version of the SXS is due to fly aboard Athena, an ESA-led X-ray astronomy mission planned for the late 2020s.

This article originally gave the wrong figure for the power of ASTRO-H. It has now been corrected.

This article has been updated to reflect the successful launch of the spacecraft.