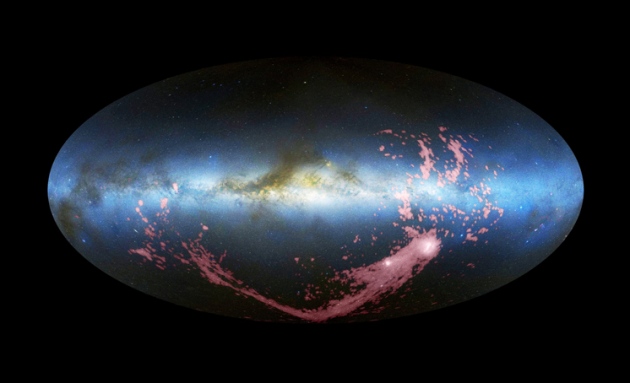 The Magellanic Stream, a band of gas (pink in this false-color image) that sweeps across part of the sky around the Milky Way (horizontal light-blue band), originates in part from the interaction of the two Magellanic Clouds (white regions at bottom right).

An enormous ribbon of gas that threads through the thinner gas of the Milky Way's halo is the result of a gravitational tug-of-war between the two Magellanic Clouds1, 2, the brightest satellite galaxies orbiting our own.

The Magellanic Sream, as the ribbon is known, stretches for hundreds of thousands of light-years behind the Magellanic Clouds; a smaller additional component pokes out ahead of them. The stream was discovered in the 1970s, and recent theoretical models suggest that it is caused by the gravitational pull of the Large Magellanic Cloud tearing gas out of its lesser sibling, the Small Magellanic Cloud. This stripping, the result of tidal forces, would have begun some 2 billion years ago, and together with an interaction with the Milky Way's halo it would have spread the gas into its current shape.

But, in 2007, astronomer David Nidever, now at the University of Michigan in Ann Arbor, and his collaborators defied conventional wisdom by proposing that part of the Magellanic Stream came from the Large Magellanic Cloud, as stellar winds and supernovae blew gas out3.

Now observations bolster this idea. Astronomers led by Andrew Fox of the Space Telescope Science Institute in Baltimore, Maryland, and Philipp Richter at the University of Potsdam in Germany estimated the amount of oxygen and sulphur in different parts of the Magellanic Stream from the way that these elements absorb ultraviolet light emitted by distant galaxies that appear behind the stream. Over most of the stream, oxygen and sulphur levels are low, the team reports, matching the abundances in the Small Magellanic Cloud around 2 billion years ago1.

However, in a separate paper, the astronomers find that one section of the stream that lies close to the Magellanic Clouds contains much more sulphur, matching the current abundances of the Large Magellanic Cloud2, which has more stars than its sibling to create this element. The new measurements are in agreement with Nidever's suggestion, and Fox suspects that the Magellanic Stream probably originates from both galaxies. "It's almost like you have two strands wrapped around each other," he says.

"They were able to make some really amazing and precise measurements," Nidever says.

Astronomer Gurtina Besla of Columbia University in New York believes that the findings address the greater question of why the two flamboyant galaxies differ from their peers. All of the Milky Way's other satellite galaxies are 'dead' — devoid of gas and of bright young stars.

Besla says that the observations support a new idea: that the Magellanic Clouds, rather than being long-time close neighbors of the Milky Way, follow a gargantuan elliptical orbit and are passing close to it for the first time4. Had they been near us all their lives, as astronomers once thought, gas in the Milky Way's halo would have pushed gas out of the Magellanic Clouds, boosting oxygen and sulphur levels along the entire Magellanic Stream — and killing off the two galaxies by robbing them of the gas needed to spawn the brilliant new stars that make them glitter.