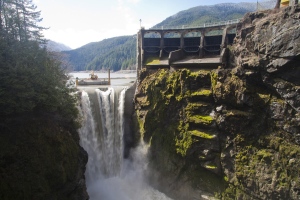 Parts of the Elwha River in Washington are flowing freely for the first time in a century, granting access to spawning fish.

A project to remove two hydroelectric dams from the Elwha River in Washington state is bringing benefits for local wildlife. In June, only months after the removal of the first dam was completed, salmon and steelhead spawned in two tributaries that had been inaccessible for more than 100 years.

But the fish are not home free yet. Massive amounts of sediment that had accumulated behind the dam have now been released, and could clog the gills of young and adult alike, killing them. The sediment will muddy the waters for at least three years before spreading out and rebuilding downstream river beds and coastal beaches; until then, the fish must navigate treacherous waters to breed.

The 72-kilometre Elwha River runs through Olympic National Park before spilling into the Strait of Juan de Fuca, on part of the reservation of the Lower Elwha Klallam Tribe, whose people once relied on the river’s bounty. Before the construction of first the 33-metre-high Elwha Dam and then the 64-metre-high Glines Canyon Dam in the early twentieth century, the Elwha River boasted abundant populations of all five Pacific Northwest salmon species, as well as steelhead trout (Oncorhynchus mykiss), native char (species of Salvelinus) and coastal cutthroat trout (Oncorhynchus clarkii clarkii).

The dams not only blocked access for fish, but also promoted erosion of downstream river beds and disrupted natural flow cycles. In 1992, after years of debate, the US Congress passed the Elwha River Ecosystem and Fisheries Restoration Act, authorizing the biggest dam removal in US history. Work began to remove the dams in September 2011, and by March 2012, parts of the river flowed freely for the first time in more than a century.

Yet controversy resurfaced in February, when four fish-advocacy groups sued the US National Park Service, the National Oceanic and Atmospheric Administration (NOAA) Fisheries Service, US Fish and Wildlife Service and the Lower Elwha tribe — among other bodies — over the use of fish hatcheries to restore salmon.

The suit claims that the hatcheries violate the Endangered Species Act, and the hatchery-reared salmon and steelhead could harm wild fish, such as threatened Puget Sound chinook salmon (Oncorhynchus tshawytscha), steelhead and bull trout (Salvelinus confluentus). Any harm to these species could in turn hurt endangered killer whales (Orcinus orca) that feed on the fish at sea.

Those opposed to the hatcheries say that they are unnecessary because salmon and trout have evolved to deal with occasional volcanic explosions and other cases of massive sediment load, and can recolonize streams without assistance. Nevertheless, many people involved with the project feel that the Elwha River’s salmon and steelhead populations need a boost from the hatchery-reared fish.

Not the only could the fish be smothered by sediment, but the eastern portion of the river’s estuary, where young fish mature, is already nearly completely blocked with sand and gravel, with just a narrow access channel remaining. And when the upstream Glines Canyon Dam is completely removed by the end of the summer, another massive slug of sediment will hit the river.

“The short-term impacts are going to be adverse. There’s no doubt about it,” says Brian Winter, manager of the National Park Service's Elwha River Restoration Project. “There’s a really high sediment load.”

With the hatchery under litigation, other salmon-restoration projects have begun, with promising signs of success. Biologists relocated 600 adult coho salmon (Oncorhynchus kisutch) to above the former site of the Elwha Dam but below Glines Canyon Dam, and half spawned there. John McMillan, a biologist at the NOAA Northwest Fisheries Science Center in Seattle, Washington, says that many of the fish spawned in Little River and Indian Creek, two primary tributaries previously blocked by the lower dam. The biologists also relocated 45 steelhead to Little River, and have since observed 36 nests, or redds, in that stream.

Even more promising is that as of mid-June, spawning steelhead have swum upstream of their own accord. “We were able to document natural colonization of the middle Elwha River by at least two steelhead,” says McMillan.

Fishing on the Elwha River will be restricted for five years, and although treaty rights grant the Lower Elwha the right to fish the river, they have voluntarily suspended their rights for five years to allow fish populations to recover.

Whatever the result of the hatcheries litigation, salmon and steelhead fry are already emerging in reaches of the Elwha River and its tributaries that have not seen their kind for decades.