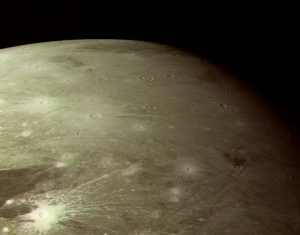 The JUICE mission will explore the icy moon Ganymede.

The European Space Agency (ESA) has approved a roughly €1-billion (US$1.3 billion) mission to Jupiter. On 2 May, ESA's Science Programme Committee endorsed the Jupiter Icy moons Explorer, or JUICE, as its next ‘large class’ space probe. JUICE was favoured over two other missions — the space-based New Gravitational-wave Observatory, and an X-ray telescope called ATHENA.

If all goes well, JUICE will launch in June 2022 on an 11-year mission to explore the giant planet and several of its moons, snapping photos of Jupiter's aurora and hunting for liquid oceans beneath the surfaces of Ganymede and Europa.

JUICE beat competing spacecraft in part because it has a lower risk of cost overruns and technical problems, says Michele Dougherty, the lead scientist on the JUICE study team and a researcher at Imperial College London. But, she adds, the probe also has broad appeal. "The strength of JUICE is that it's of interest to a diverse community of scientists," she says.

The mission's main quarry is Ganymede. The moon’s icy exterior is thought to hide an ocean of liquid water, sandwiched between layers of ice almost two hundred kilometres below the surface. Ganymede also seems to have a swirling liquid core that is rich in iron, much like Earth's. The mechanisms that keep this dynamo spinning, and its subterranean seas liquid, remain a mystery, Dougherty says. The problem is made all the more interesting because Ganymede seems to be an archetypical ‘water world’ of a sort now believed to be common outside the Solar System.

JUICE will also fly past Europa, another moon thought to have a liquid ocean beneath its surface. Originally, JUICE was to fly in tandem with a NASA orbiter dedicated to Europa, but NASA abandoned that plan after an independent planetary decadal survey warned that the mission would be too costly (see ‘US Mars mission takes pole position’). That makes JUICE's two fly-bys of Europa extremely valuable, says Robert Pappalardo, the study scientist for the Europa mission, based at the Jet Propulsion Laboratory in Pasadena, California. "They will revolutionize our understanding of icy satellites," he says. The spacecraft will also take measurements of Jupiter's magnetosphere and auroras, and pass briefly by the moon Callisto on its way to orbit Ganymede.

JUICE will be powered by enormous solar panels.

Weighing in at just under five tonnes, JUICE will be among the heaviest spacecrafts ever to launch to the outer planets. It will use massive solar panels with a total area of 60–70-square metres to capture enough of the Sun's faint rays to keep its instruments running while orbiting Jupiter.

Many details about the JUICE mission have yet to be worked out, Dougherty says. Crucially, ESA's member states must now bid to build instruments for the spacecraft. The necessary kit will probably include a radar for probing beneath the surface of the icy moons, magnetometers and cameras. NASA may also pitch in with an instrument or two, Pappalardo says, "assuming that the funding situation in the United States can bear it".

Dougherty says that the craft's design and scientific capabilities will be firmed up in the next 18 months.

The original article incorrectly stated that this is the first solar-powered spacecraft to travel to Jupiter.