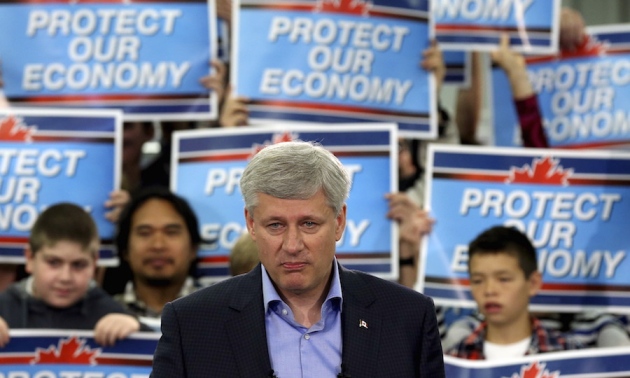 Stephen Harper has been Canada's prime minister since 2006.

Canadians will head to the polls on 19 October, in a federal election that many scientists hope will mark a turning point after years of declining research budgets and allegations of government censorship.

Prime Minister Stephen Harper, in office since 2006, now finds his right-leaning Conservative party in a tight, three-way race with the left-leaning New Democratic Party (NDP) and the middle-left Liberals. Although science has not emerged as a top issue during the campaign, researchers are fighting to make their concerns heard.

In an unprecedented move, the Professional Institute of the Public Service of Canada — a union in Ottawa that represents more than 57,000 government scientists and other professionals — is campaigning in a federal race. “Here’s how we do things in the Harper government,” declares one of the union’s radio advertisements. “We muzzle scientists, we cut research and we ignore anyone who doesn't tell us what we want to hear.”

The group estimates that the Harper administration has eliminated jobs for some 2,500 scientists. And the government’s own data show that Canada’s spending on scientific research and development dropped from sixteenth among 41 comparable nations in 2006 to twenty-third in 2011 (the most recent year for which government figures are available). Harper has also been accused of limiting government scientists’ ability to communicate with the press and public; Canada’s information commissioner promised to investigate in 2013, but has not yet released any findings.

A call for science advice

While the Conservative party has done little to address such critiques, members of the two opposition parties have advocated a stronger role for science in government. Dozens of NDP and Liberal candidates for parliament have declared their support for evidence-based decision making by signing a “science pledge” developed by Evidence for Democracy, a non-profit science-advocacy group in Ottawa.

Science advocates see little chance that their issues will be aired during a 17 September debate in Calgary that will pit Harper against NDP leader Thomas Mulcair and Liberal leader Justin Trudeau. But concerns about the state of Canadian science have nevertheless influenced party platforms.

The middle-left Liberal Party has made scientific integrity part of its election campaign, proposing the creation of a central public portal to disseminate government-funded research. The party seeks to appoint a chief science officer to ensure the free flow of information.

In contrast, Harper's government phased out the position of national science adviser in 2007–2008, replacing it with the Science, Technology and Innovation Council (STIC) — a body that has drawn criticism from scientists for operating behind closed doors. STIC reviews issues at the request of the federal government, and many of its reports are confidential. “It doesn't even have many scientists on it,” says Graham Bell, a biologist at McGill University in Montreal and president of the Royal Society of Canada, who would like to see the science-adviser post re-established.

Similarly, the NDP has called for a parliamentary science officer, a position that would be independent of the majority party or coalition leading the government.

Katie Gibbs, executive director of Evidence for Democracy, says that Canada could benefit from either a science adviser or parliamentary science officer. “They're different visions,” she says. “You could easily have both.”