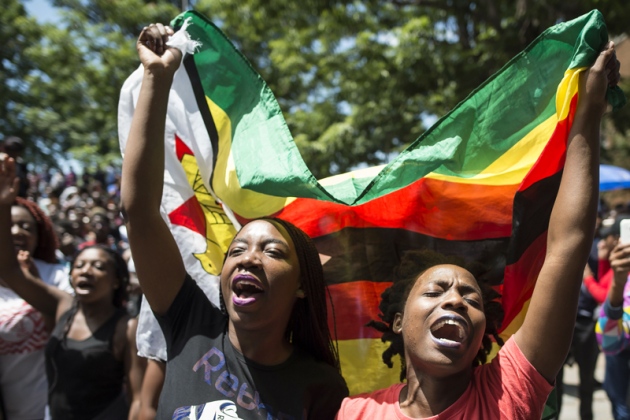 Protesters gathered at the University of Zimbabwe in Harare this week, amid political ructions that precipitated the end of Robert Mugabe's 37-year rule.

Scientists in Zimbabwe say they are hopeful that the sudden change of political power in their country could spell a new era for its beleaguered research system. Those working in the nation hope that the shift will unlock and attract research funds from overseas, while Zimbabwean researchers abroad say that the potential for new order in their country could encourage them to return home.

The authoritarian regime of Robert Mugabe, the 93-year-old who had been president of Zimbabwe for 37 years, ended abruptly on 21 November when he resigned following military and political pressure. Emmerson Mnangagwa, the former vice-president whose firing by Mugabe this month set off the revolt, was sworn in as the country's leader this morning. Elections are expected to be organized next year.

The ructions have been widely celebrated both inside and outside Zimbabwe. The southern African country’s economy has been in free fall for almost two decades since Mugabe fast-tracked a programme of land expropriation, which destroyed investment in its agricultural sector and undermined confidence in the economy. The turmoil led millions — including scientists — to flee the country, many into neighbouring South Africa.

Traditionally, much of the country's research has come from ties between Zimbabwe's universities and the agriculture industry, where research and development was considered central to its productivity. Major study areas included maize, land-management and veterinary research. But science became difficult as government funding for research dried up. Last year, the Zimbabwe Academy of Sciences' situation became so desperate that it implored the country’s large diaspora to support the organization.

International sanctions against Zimbabwe have also penalized the country’s students and academics, who have not been able to access international grants, scholarships or buy equipment from foreign companies prohibited from trading with Zimbabwe, says Dexter Tagwireyi, a pharmacist at the University of Zimbabwe in Harare and head of the Zimbabwe Young Academy of Science. If the incoming government has better relationships with Western countries, such as the United Kingdom and the United States, it could mean that researchers are able to access new sources of funds, he says.

At his inauguration, Mnangagwa said that Zimbabwe was ready to engage with other countries and urged the international community to reconsider their economic embargoes. The African Union, a continental group of nations including Zimbabwe, has been pushing science, technology and innovation as a way for African countries to achieve economic and social development.

The promise of a more democratic government could also attract researchers who have left to return and swell the country’s academic ranks. “This change of leader interests me to go back and serve in Zimbabwe as an academic,” says a Zimbabwean researcher at the University of Johannesburg in South Africa, who asked to remain anonymous because he was concerned about what his employer might think. The prospect of order in his home country would tempt him to return “at the speed of light”, he says, in part because Zimbabwe is not as crime-ridden as South Africa. The sentiment was echoed by several other early-career Zimbabwean scientists in South Africa contacted by Nature.

Zimbabwe does not keep official figures on academics, but a 2012 report by the United Nations Educational, Scientific and Cultural Organization said that 1,300 researchers were working there at the time. And despite chronic underfunding, Zimbabwe has consistently produced around 400 peer-reviewed papers a year. (By comparison, South Africa produced 17,246 research publications in 2015.)

“I just hope the new regime will resuscitate the economy and generate significant research funding for higher-education institutions,” says Rudo Gaidzanwa, a sociologist at the University of Zimbabwe. “That would boost the research output of academics in state universities.”

South Africa, with its comparatively strong research system, is a major destination for students from around Africa, and a key collaborator for Zimbabwean scientists. A Web of Science search shows that since 2013, roughly one-third of 1,689 research articles authored by Zimbabwe-affiliated researchers had a collaborator who was based in South Africa.

A strengthened science system in Zimbabwe would benefit the entire region, open the door to greater collaboration and offer a destination for students trained in South Africa, says Valerie Mizrahi, director of the Institute of Infectious Disease and Molecular Medicine at the University of Cape Town in South Africa.

South Africa takes scholars from across the continent, and in many cases the idea of them going home is a pipe dream, because there is often not much to go back to, Mizrahi says. “Zimbabwe has a chance to change that.” Mizrahi, who was born in Zimbabwe but has lived in South Africa for decades, says that the situation is reminiscent of South Africa when apartheid was being dismantled in the 1990s and sanctions were lifted. “Funding flowed into the country,” she says.

Despite the celebrations in Zimbabwe, there are concerns that Mnangagwa’s presidency will not bring enough change. The new leader was a close associate of Mugabe and served in various positions in his government, which was characterized by nepotism and the silencing of opposition voices. “So we are not sure whether they will do things differently or all they wanted was just power to also suppress citizens and loot resources in the country," says Farayi Moyana, a PhD candidate at South Africa's University of the Witwatersrand who is based in Zimbabwe.

The uncertainty means that academics aren't making plans just yet: “There is no hurry to return home,” says a Zimbabwean scientist at Witwatersrand in Johannesburg, who also spoke on the condition of anonymity. Rather, he says, he will let the situation stabilize before making any decisions.