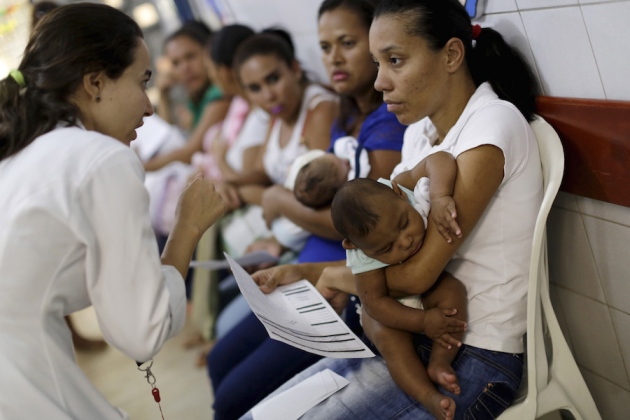 Mothers of children with microcephaly await medical care at a hospital in Recife, Brazil.

Researchers at the body responsible for monitoring birth defects in Latin America are questioning the size of an apparent surge in the number of Brazilian children born with 'microcephaly' — abnormally small heads and brains.

Alarm is growing about a reported rise in suspected cases of the rare condition, which has been tentatively linked to the rapid spread of the Zika virus through the Americas. But Jorge Lopez-Camelo and Ieda Maria Orioli, from the Latin American Collaborative Study of Congenital Malformations (ECLAMC), say that the surge might largely be attributed to the intense search for cases of the birth defect, and misdiagnoses, because of heightened awareness in the wake of the possible link with Zika.

This ‘awareness’ effect is well known and inevitable, they say, and must be revealing cases that would have gone unnoticed under normal circumstances. They also say that a high rate of misdiagnoses among reported cases is likely because the diagnostic criteria being used for microcephaly are broad.

Lopez-Camelo and Orioli presented their analysis in Portuguese-language reports, and, after Nature’s enquiries, provided an English version of the summary (ECLAMC Report).

They say that from the epidemiological data available, it is impossible to establish the true size of the surge in microcephaly, and whether there is any link with the Zika virus. In particular, large 'prospective' studies, in which pregnant women in areas of Brazil experiencing Zika outbreaks are monitored to see how many of their children develop microcephaly are needed, they say. Several research groups in and outside Brazil are already planning such studies, and some have begun.

Specialists contacted by Nature emphasize that it is prudent for pregnant women to be cautious — for example, by protecting themselves against mosquito bites — until more is known.

The experts agree that the reported size of the microcephaly increase so far is probably inflated — and this chimes with the latest figures from the Brazilian government. On 27 January, it said that of 4,180 suspected cases of microcephaly recorded since October, it has so far confirmed 270 and rejected 462 as false diagnoses.

But some disagree with the ECLAMC team's conclusion that the reported surge in recent months can mostly be attributed to an increase in the intensity of the search for cases and misdiagnosis. Thomas Jaenisch, a tropical medicine specialist at the Heidelberg University Hospital in Germany, calls this an “extreme” position and says that it “might also create uncertainty in the media and public discussion in Brazil”.

Previously confined to Africa and Asia, Zika virus reached the Americas in 2015, where it is currently causing an unprecedented epidemic in Brazil (see 'Zika in the Americas'). Most people infected with the virus — after being bitten by a mosquito — have no symptoms; the remainder have mild symptoms such as fever, skin rash and headache. 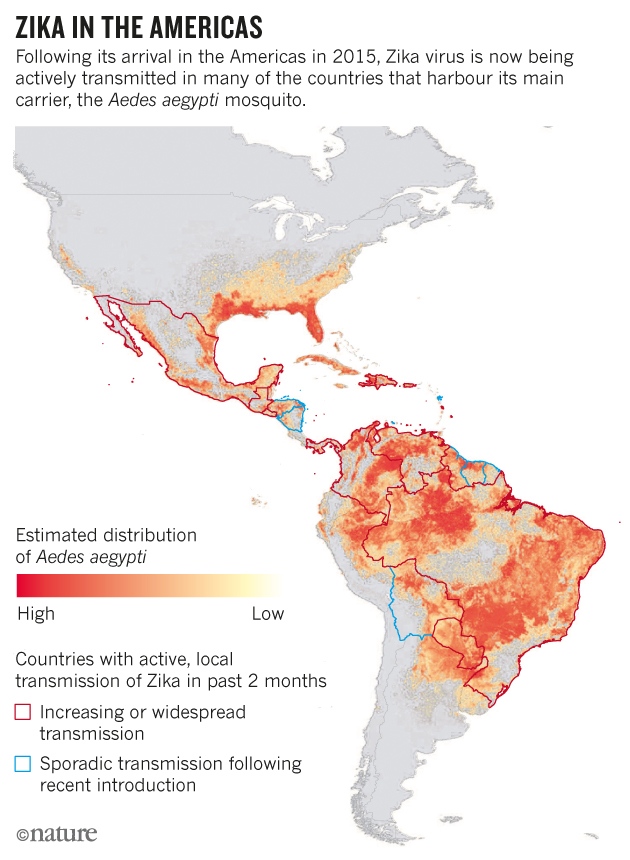 But in October, Brazil's health ministry reported an unusual spike in reported cases of microcephaly in the northeastern state of Pernambuco, where the affected children's mothers had been in early pregnancy at around the same time as large Zika outbreaks occurred. The ministry subsequently raised the alarm of a possible link to Zika.

This led the World Health Organization and its regional office, the Pan American Health Organization (PAHO), to issue an epidemiological alert on 17 November last year, which called on member states to look out for any similar increase in microcephaly among their populations.

Earlier this month, the US Centers for Diseases Control and Prevention issued a travel notice, “out of an abundance of caution”, that advised pregnant women to consider postponing travel to places that have ongoing Zika outbreaks.

To investigate the situation, the researchers at ECLAMC turned to its own databases dating back to 1967, as well as the country's Live Birth Information System (SINASC).

According to ECLAMC, the average historical prevalence of microcephaly in Brazil is around 2 cases per 10,000 births, although rates in the country's north have typically been higher. The researchers calculate that the maximum number of cases that would have been expected in the northern state of Pernambuco in 2015 is around 45. Yet Pernambuco reported 26 times that number last year. Even if Zika is causing microcephaly, these huge numbers are simply too high to be credible, says the report.

As well as the increased diagnoses owing to heightened awareness from the media and governments, Lopez-Camelo also highlights that the diagnostic criteria for microcephaly are relatively unspecific and are casting too wide a net.

Brazilian health authorities are treating all fetuses with head circumferences that are more than two standard deviations below the average, and newborns with a head circumference of less than 32 centimetres, as suspected cases. But these criteria will inevitably capture many healthy children within the normal growth range who do not have microcephaly.

But head circumference is only a proxy measure, note Lopez-Camelo and Orioli: confirming microcephaly requires a diagnosis of small brain size, and a decreased rate of brain growth.

The pair are not alone in drawing attention to the broad diagnostic criteria — a risk assessment published on 21 January by the European Centre for Disease Prevention and Control (ECDC) also noted this and said: “It is expected that many of the suspected cases will be reclassified and discarded.”

Helen Dolk, an epidemiologist at the University of Ulster near Belfast, UK, who works on the surveillance of congenital abnormalities, says that the ECLAMC’s conclusion — that the apparent surge could be largely an artefact — is possible in principle. But she stresses that it is impossible to confirm until more data becomes available — and that she is reserving judgement on the portion of the apparent increase that can be attributed to confounding factors.

Lavinia Schüler-Faccini, a researcher at the Federal University of Rio Grande do Sul, Brazil, and president of the Brazilian Society of Genetic Medicine, says that she is certain that there has been a substantial increase in microcephaly cases. She notes that physicians began reporting a rise before the increased attention by health authorities, and the media began reporting a spike last November. “My personal impression is that there is an augmentation of cases of microcephaly in Brazil,” she says. “However it is not as huge as the suspected cases referred to the Ministry of Health.”

Prospective studies have started and others are planned, she says. And she adds: “All our efforts now are to establish the real level of increase.”

Establishing whether there is a link between microcephaly and Zika is particularly important because people living in the Americas lack immunity to the virus. This, combined with the fact that the Aedes mosquitoes that transmit the virus are widespread in the Americas, means that many people will be infected in future, including pregnant women.

Zika virus has been found in amniotic fluid, placental or fetal tissues in several cases of nervous system malformations, including microcephaly, in Brazil.

Following a World Health Organization press conference on Zika virus on 28 January, the agency said in a statement: “A causal relationship between Zika virus infection and birth defects and neurological syndromes has not been established, but is strongly suspected.” It also said: “The Organization is supporting the scaling up and strengthening of surveillance systems in countries that have reported cases of Zika and of microcephaly and other neurological conditions that may be associated with the virus.”

The two elements on the map’s key were originally the wrong way round. The map has now been corrected.