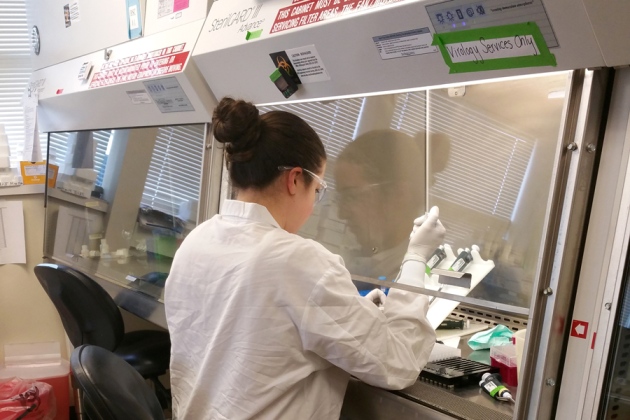 Gabrielle Lehrer-Brey, part of a team that is experimentally infecting macaques with Zika virus, works with blood-plasma samples at the University of Wisconsin-Madison.

Researchers in the United States who have infected monkeys with Zika virus made their first data public last week. But instead of publishing them in a journal, they have released them online for anyone to view — and are updating their results day by day.

The team is posting raw data on the amount of virus detected in the blood, saliva and urine of three Indian rhesus macaques, which they injected with Zika on 15 February. “This is the first time that our group has made data available in real time,” says David O’Connor, a virologist at the University of Wisconsin–Madison and a leader of the project, whose scientists have dubbed themselves ZEST (the Zika experimental-science team). He hopes that releasing the data will help to speed up research into the nature of the virus that has spread across the Americas.

Although a few teams have begun to share genomic data online during disease outbreaks, instant open-data release remains the exception rather than the rule, particularly in clinical research. O’Connor says that he was inspired by researchers during the Ebola epidemic who rapidly published genomic-sequencing data online and encouraged others to re-analyse them. At the time, O'Connor's group downloaded raw data shared by a team led by Pardis Sabeti, a computational geneticist at the Broad Institute and Harvard University in Cambridge, Massachusetts; it immediately helped to advance their own Ebola research, he says, and led to a collaboration with Sabeti's group.

"O'Connor's team is to be lauded for their efforts to make their Zika virus data publicly available as soon as possible," says Nathan Yozwiak, a senior scientist in Sabeti's laboratory. "Distributing up-to-date information — in this case, animal model data — as widely and openly as possible is critical during emergencies such as Zika, where relatively little is known about its pathogenesis, yet public concerns and attention are so high."

“This is exemplary for research,” agrees Koen Van Rompay, a specialist in non-human primate models of HIV infection at the California National Primate Research Center at the University of California, Davis. Van Rompay is part of a consortium that plans to inject pregnant macaques with Zika. He says that his team will also share data openly in real time. 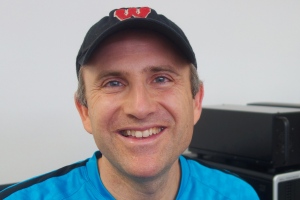 David O'Connor, whose 'ZEST' team at the University of Wisconsin-Madison are releasing Zika data in real time.

O’Connor’s team seems to be the first to have detailed information from macaques infected with Zika virus, so the rapid data release will enable other researchers planning similar experiments to take the work into account, saving time and resources, Van Rompay adds. “This is such an urgent public-health emergency that this should not be a race of scientists competing against each other. We’re in a race against the Zika virus, a race against time,” he says.

Like other researchers, the ZEST team wants to understand when a developing fetus might be at risk of birth defects from Zika. Typically, the virus gives rise to no or mild symptoms — but scientists are urgently working to estimate the strength of any association between Zika infection and an apparent rise in the number of babies born with microcephaly (abnormally small heads and brains) in northeastern Brazil.

If the virus behaves the same way in macaques that it does in humans, O’Connor says, researchers will be able to glean information by infecting monkeys with varying doses of Zika — data that would be impossible to gain rapidly or ethically from people. Scientists could repeatedly sample amniotic fluid in pregnant macaques, for example, to determine whether, and how quickly, the virus can infect a fetus.

The team is starting with male monkeys to get information on how the virus behaves in macaques and determine which dose would be most suitable for later experiments. They have already shown that Zika can infect macaques and that it is detectable not only in blood, but also in cerebrospinal fluid and urine. They will follow up their work with experiments in macaques at different stages of pregnancy, checking for the virus's presence in a wide range of tissues and organs.

Even if a link to birth defects is proven, it may still be that very few Zika infections during pregnancy lead to microcephaly, O'Connor says. But he thinks that even with a small number of animals, the team can assess important questions such as whether fetuses become infected with Zika virus and whether they develop abnormalities as a result.

Pregnant rhesus macaques have been used in past to study congenital birth defects, O’Connor adds. Research on the effects of cytomegalovirus or Listeria, for example, have revealed that the diseases produce similar effects in macaques and in humans. The team also hopes to carry out Zika studies in marmosets, which are native to northeastern Brazil and smaller than macaques, making them easier to work with in the lab. If it is possible for the virus to infect marmosets, this might also suggest that the animals are involved in Zika transmission in Brazil, O'Connor says.

It was easy for the ZEST members to make their online lab notebook open to all, O’Connor says. The team uses the biomedical-research collaboration system LabKey Server, as does the Wisconsin National Primate Research Center in Madison, which is where many of the ZEST collaborators work and which (along with the US National Institutes of Health) is supporting the research. Researchers created a study to store and update their data, and simply had to switch permissions to allow anyone to view it. Meanwhile, regulatory agencies at the University of Wisconsin–Madison understood that the work was time-sensitive and expedited approvals for animal care and biosafety (without reducing scrutiny, O’Connor adds).

On 10 February, dozens of major funders, government agencies and journals released a statement supporting open-data sharing — even before publication — during public-health emergencies such as the Zika and Ebola epidemic. “In the context of a public-health emergency of international concern, there is an imperative on all parties to make any information available that might have value in combatting the crisis,” it concluded.

Jeremy Farrar, director of the Wellcome Trust in London – one of the research funders that signed the statement – says he welcomes the “increasing commitment” of scientists to sharing information during public health emergencies. “The world is changing and all of us involved need to encourage, facilitate and give thanks and credit to these teams and the approach they are taking,” he says.

“I hope that even those who disagree in principle with animals in research realize that making data available publicly works towards a common goal," O'Connor adds. "Fewer animals will be used in research if groups know what others are doing, and the information that is gained from each animal is maximized.”