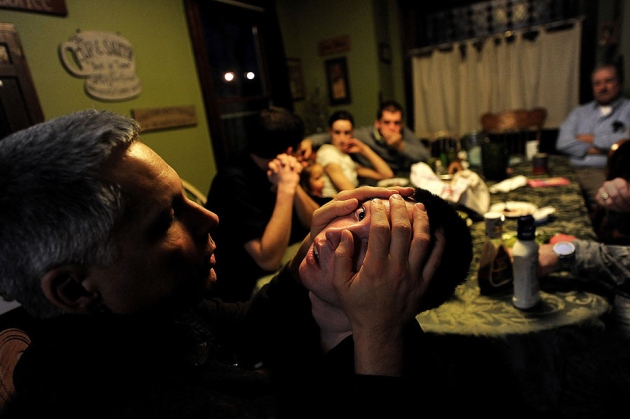 This 22-year-old is severely disabled by fetal cytomegalovirus infection and cannot communicate verbally.

A virus is killing hundreds of babies in the United States each year, and leaving thousands with debilitating birth defects, including abnormally small heads and brains. This is not the Zika virus. It is a common and much less exotic one: cytomegalovirus (CMV).

Now, as the eyes of the media and health officials focus on the spread of Zika in the Americas and beyond, many researchers and advocates hope that funders and health agencies will at last pay more attention to a much greater global problem — the millions of babies born year in, year out, with often-serious birth defects.

“Birth defects are not high on the public-health agenda,” says Stanley Plotkin, a vaccine researcher at the University of Pennsylvania in Philadelphia who in the 1970s developed the current vaccine against rubella (German measles). A 1960s rubella pandemic caused tens of thousands of birth defects in the United States alone.

“Zika is an opportunity,” he says — to raise the profile of birth defects among research funders and public-health agencies, and to accelerate efforts to develop a CMV vaccine.

The World Health Organization (WHO) estimates that, annually, more than a quarter of a million babies worldwide die shortly after birth from congenital anomalies, and many more are born with serious defects. The causes are many — some known, some not. A global focus on reducing child mortality has meant that severe disabilities in children are a lower public-health priority, says Anita Kar, a specialist in congenital abnormalities at the University of Pune in India.

CMV is a poster child for the problem — and with Zika so much in the news, scientists and advocacy groups are voicing frustration and trying to seize the moment. The US National CMV Foundation is running information campaigns comparing and contrasting Zika with CMV. It is lobbying politicians to build on the mandates enacted in several states for public-health authorities to produce outreach material, including billboards on sides of buses, and to do CMV tests for all infants with hearing difficulties.

“Zika has become a way to open up conversations about CMV,” says Janelle Greenlee, a co-founder of the CMV foundation, who lost one daughter to congenital CMV and has another, the daughter’s twin, with serious hearing loss and cerebral palsy.

CMV infections in adults, children and infants are mostly asymptomatic and harmless, but the virus is much more dangerous — often lethal — to the fetus. Worldwide, around 1 in 100 to 500 babies are born with congenital CMV, and of the 10–20% who show symptoms, about 30% will die. Survivors often have liver, lung or spleen damage, or neurological problems including developmental disability or loss of hearing or sight.

CMV’s link to birth defects has been known since the 1950s — yet a 2012 survey found that only 13% of US women and 7% of men had heard of congenital CMV (M. J. Cannon et al. Prev. Med. 54, 351–357; 2012). Low awareness is deadly, says Gail Harrison, an infectious-disease researcher in CMV at the Baylor College of Medicine and the Texas Children’s Hospital, both in Houston.

There is no vaccine, so precautions — handwashing and avoiding contact with children’s saliva and urine — are the only defence. Harrison works closely with patient groups to promote awareness, but says that she struggles with the inertia of state and federal agencies in helping to get these messages across.

The administration of US President Barack Obama has requested more than US$1 billion for research and control measures for Zika, and the website of the US Centers for Disease Control and Prevention (CDC) is awash with information and advice on that virus, she notes. But the more modest amount of information on CMV has to be actively searched for.

Leading health experts and the CDC expect that Zika in the United States will be limited to small, localized outbreaks in southern states where Aedes aegypti, the mosquito that transmits the virus, is present during warm parts of the year. That prediction is based on the pattern of past US outbreaks of dengue and chikungunya, two other diseases carried by the same mosquito. For the United States, says Plotkin, “there is little doubt that CMV is a bigger problem than Zika”.

Contributors to birth defects include genetic abnormalities as well as many more preventable factors, such as infectious diseases, medications, diet and environmental chemicals. But the causes of almost three-quarters are unknown.

Better training in birth-defects epidemiology is urgently needed, in particular in developing countries, says Kar. Such research is difficult, requiring population-scale surveillance registries, and often relies on questionnaires that ask mothers of children with congenital abnormalities to try to recall past exposures — a process susceptible to inaccuracies.

To improve matters, pan-European and US birth-defect registries are increasingly trying to match pregnancy outcomes with vast databases of histories of prescribed drugs, local water- and air-pollution levels, and other factors. Prescription histories are especially important because pregnant women are usually excluded from clinical trials, and so little may be known about the safety of medicines for fetuses.

But many poorer countries lack even basic surveillance. In the case of neural-tube defects such as spina bifida, for example, a global review published in April found that 120 of the WHO’s 194 member states had no prevalence data (I. Zaganjor et al. PLoS ONE http://doi.org/bkrj; 2015). “Registries are urgently required,” says Kar.

This story wrongly said that Stanley Plotkin has retired, he is still working at the University of Pennsylvania in Philadelphia. The text has been updated.