After 160 swoops in NASA’s zero-gravity aeroplane, researchers have the first evidence that genetic sequencing can be done in space. 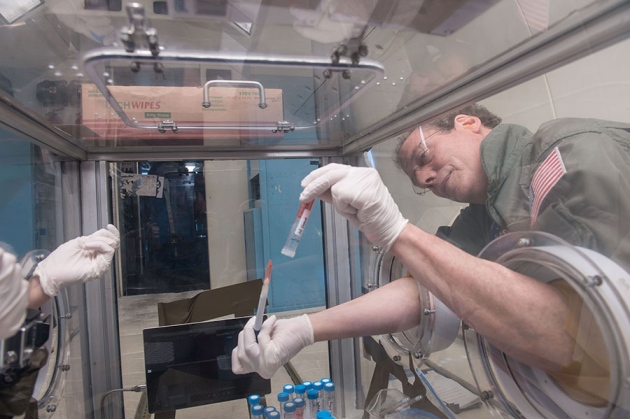 Geneticists Andrew Feinberg and Lindsay Rizzardi at Johns Hopkins University in Baltimore, Maryland, spent 15–18 September performing genetics experiments on NASA’s reduced-gravity aircraft — otherwise known as the vomit comet, which undulates in sweeping parabolas to simulate the weightlessness of space. “I was in heaven from the first second,” Feinberg says. “I absolutely loved it.”

The researchers tested two key tools in zero-gravity: one might aid long-term storage of genetic material; another is a small, transportable genetic sequencer.

Storing samples for extended periods in space requires pipettes that can, for instance, suck up a layer of centrifuged blood and place it into another vessel — a tricky task to complete in zero gravity without spilling any fluid. Feinberg and Rizzardi tried three pipetting methods on their flights. One, proposed by NASA, used long needles connected by plastic tubing to transfer a sample to a fresh container, but it was difficult to control consistently. Another used standard serological pipettes (see video above), but their width relative to a sample tube destroyed the fluid’s surface tension and allowed the liquid to climb the walls of the container. The technique also created air bubbles, Rizzardi says, which are difficult to get rid of in zero gravity.

A third method, using positive displacement pipettes, yielded the best results (see video below). A small plunger inside the pipette touches the sample directly, ensuring that no air gets in. And the pipette's tip is small enough to avoid ruining the surface tension, which would let fluid escape up the tube.

“We didn't know that was going to work,” Feinberg says, “but it works great.”

Feinberg and Rizzardi also tested a small genetic sequencer called a MinION that a colleague sent on the flight with them. As Christopher Mason, a geneticist at Weill Cornell Medicine in New York City, recalls: “I said, ‘Hey, if you're going up can we send you some MinIONs and can you see if it works?’.” Tests with the MinION successfully sequenced a small amount of DNA that had been prepared on the ground. Mason and a NASA colleague plan to send a MinION to the International Space Station (ISS) in early 2016.

Feinberg and Mason are two of the ten principal investigators on NASA’s Twins Study, an experiment that closely tracks biological changes between twin astronauts Mark and Scott Kelly. Scott is currently aboard the ISS for a year, regularly sending back biological samples for researchers on the ground to compare with those from his brother on Earth.

One of the reasons for testing techniques such as these is to see whether astronauts will be able to sequence their own DNA during future long-term spaceflights, Feinberg says. “I really have to give NASA huge credit in allowing us to do this,” he says. “They're very curious people. They really want to know.”