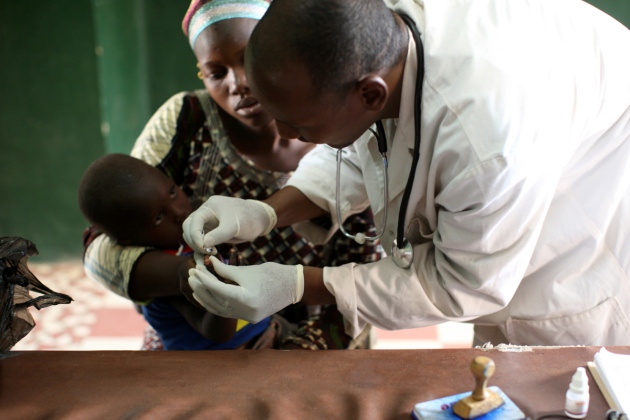 A health worker tests a child's blood for malaria at a free clinic in Mali. A new study has raised cautious optimism that an effective vaccine might finally become available.

A malaria vaccine has become the first to provide 100% protection against the disease, confounding critics and far surpassing any other experimental malaria vaccine tested. It will now be tested further in clinical trials in Africa.

The results are important because they demonstrate for the first time the concept that a malaria vaccine can provide a high level of protection, says Anthony Fauci, director of the US National Institute of Allergy and Infectious Diseases in Bethesda, Maryland, adding that the findings are cause for "cautious optimism".

No effective malaria vaccine is available at present. The World Health Organization has set a target to develop a malaria vaccine with 80% efficacy by 2025, but until now, says Fauci, "we have not even gotten anywhere near that level of efficacy."

Scientists had previously been sceptical of the vaccine because producing it required overcoming massive logistical hurdles. The vaccine — called PfSPZ because it is made from sporozoites (SPZ), a stage in the life cycle of the malarial parasite Plasmodium falciparum (Pf) — uses a weakened form of the whole parasite to invoke an immune response.

In the phase I safety trial, reported today in Science1, the six subjects given five doses intravenously were 100% protected from later challenge by bites of infectious mosquitoes, whereas five of six unvaccinated controls developed malaria — as did three of nine people given only four doses of the vaccine.

PfSPZ was developed by Sanaria, a company based in Rockville, Maryland, and led by Stephen Hoffman, a veteran malaria researcher who also led the PfSPZ clinical trial. Most malaria-vaccine candidates are recombinant-subunit vaccines containing just a handful of parasite proteins, but Hoffman decided to test the whole-sporozoite vaccine on the basis of past experiments dating back to the 1970s showing that strong and long-lived protection could be obtained by exposing volunteers to thousands of bites from irradiated infected mosquitoes2.

That the vaccine works so well is a "pivotal success," says Stefan Kappe, a malaria researcher at the Seattle Biomedical Research Institute in Washington."The trial results constitute the most important advance in malaria vaccine development since the first demonstration of protection with radiation attenuated sporozoite immunization by mosquito bite in the 70s."

But to make PfSPZ was challenging. Sanaria succeeded in raising mosquitoes in sterile conditions on an industrial scale, feeding them blood infected with the malaria parasite and then irradiating them to weaken the parasite so that it can still infect people but not cause disease.

Billions of parasites were then harvested from the mosquitoes' salivary glands, purified and cryopreserved. Many researchers were highly sceptical that sporozoites could be mass-produced in a way that passed the strict quality and safety standards needed for human medicines, notes Fauci. "To my amazement, Hoffman did it," he adds.

Hoffman says that he hopes to have a vaccine licensed within four years. The trial now needs to be repeated and extended in regions where malaria is rampant to test whether it provides protection against different strains of the parasite than that used in the vaccine, and to see how it performs in different age groups, including young children. The first trials will be carried out at the Ifakara Health Institute in Tanzania.

Even if the vaccine is shown to be highly effective in the field, logistical difficulties might limit its applicability. In mass vaccination campaigns, hundreds of people are vaccinated within minutes, so vaccines are usually given orally or by injection into or just under the skin. Intravenous injection is more cumbersome. "It's very unlikely to be deployable in infants or young children," argues Adrian Hill, a malaria researcher at the Jenner Institute in Oxford, UK.

In 2011, a clinical trial of PfSPZ given under the skin reported disappointing results, protecting only two of 80 subjects3. But the need to deliver the vaccine intravenously "is not a show-stopper", says Hoffman, noting that the volume of vaccine —  0.5 millilitres — is tiny and requires a tiny syringe, although the company is exploring ways to improve the intravenous delivery system.

Another logistical hurdle, says Hill, is that the vaccine must be kept frozen in liquid nitrogen vapour phase. Hoffman argues, however, that the vaccine can piggyback on veterinary infrastructure in places that use liquid nitrogen to store and transport veterinary vaccines and semen for artificial insemination of livestock. "If you can carry semen into the deep Saharan belt and remote areas, why can't you do that for a human vaccine?" says Marcel Tanner, director of the Swiss Tropical and Public Health Institute in Basel, Switzerland, which is a sponsor of the trial in Tanzania.

"Which of the logistical challenges can be managed and which will become show-stoppers can be difficult to predict," says David Kaslow, director of the PATH Malaria Vaccine Initiative in Washington, DC, a public–private partnership for malaria-vaccine development.

Kappe hopes the trial results will encourage funders to invest more in optimizing this vaccine approach. "If we were talking about an HIV vaccine, there would be no question about investing in this type of success," he says.