Bad news, scientists: there is a good chance that your most cutting-edge work is behind you.

Researchers are at their most creative when they are young, or so says conventional wisdom: Charles Darwin and Max Planck both argued that young scientists were more open than older colleagues to new ideas. But the topic is not just fodder for chats over post-seminar beers. Funders such as the US National Institutes of Health have implemented policies specifically to support early-career scientists, based in part on the view that young researchers are more innovative than seasoned scientists. And in mathematics, the Fields Medal has been reserved for researchers under 40.

“It’s always just a claim — the young are more innovative — but there’s no proof,” says Mikko Packalen, an economist at the University of Waterloo in Canada, who led the study with economist Jay Bhattacharya of Stanford University in California. Their working paper was published this month by the US National Bureau of Economic Research (M. Packalen and J. Bhattacharya Preprint at http://doi.org/z87; 2015).

To determine which scientists used the most innovative ideas, Packalen and Bhattacharya turned to the leading index of biomedical research, MEDLINE (accessed through the website PubMed), which stores more than 21 million articles published since 1946.

The duo developed a computer program that identifies every one-, two- or three-word string in the title and abstract of each paper. It then logs when each string first appeared in the literature and counts how many times it has appeared subsequently, to determine its popularity. (The all-time winning concept was ‘polymerase chain reaction’, the DNA-copying technique, occurring in more than 176,000 titles or abstracts — see ‘Popularity charts’.)

Packalen and Bhattacharya then ranked the most innovative articles for each year, from 1946 to 2011, on the basis of whether they were an ‘early adopter’ of the hottest keywords.

The method could not measure researchers’ creativity, only their willingness to embrace new ideas, which might have been proposed by others. But it showed that except for the newest scientists, young researchers far outpaced older scientists in citing new ideas in their papers, Packalen and Bhattacharya found (see ‘Cooling down’). Because the two had no way of measuring the actual age of a researcher, they calculated ‘career ages’ — the number of years after a scientist’s first publication. 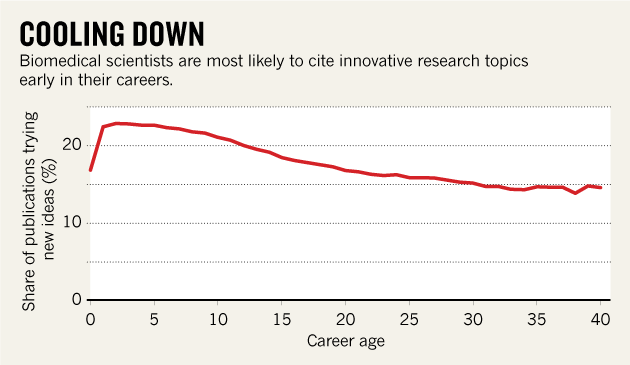 “I really like the way they’re approaching things in terms of text analysis,” says Bruce Weinberg, an economist at Ohio State University in Columbus, who works with Packalen and Bhattacharya on other projects.

All is not lost for senior scientists, however. Packalen and Bhattacharya also analysed the career stages of papers’ first authors (who tend to do the bulk of the research) and last authors (who tend to be supervisors), and found that the most innovative combination was an early-career first author and a mid-career last author (see ‘Hot spot’). “One reading of the results is that we quantified something that a lot of people thought was true: that young guys are innovative but they also need some mentorship,” says Packalen. 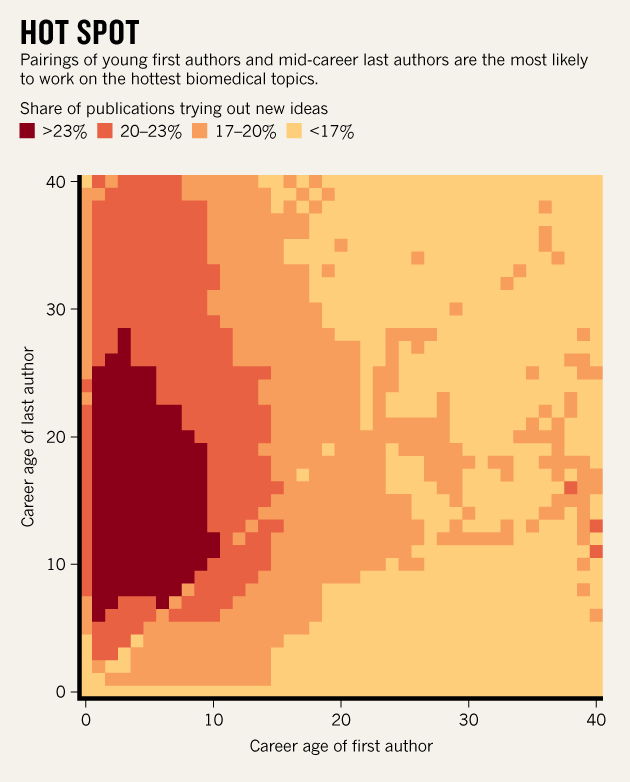 And Weinberg previously found that the age at which scientists make Nobel-prizewinning breakthroughs is increasing (B. F. Jones and B. A. Weinberg Proc. Natl Acad. Sci USA 108, 18910–18914; 2011). “I think we’re learning something about what these different measures are picking up,” Weinberg says.

Nonetheless, Paul Ginsparg, a physicist at Cornell University in Ithaca, New York, and the founder of the online repository arXiv.org, says that Packalen and Bhattacharya’s findings make sense. “In some areas of biomedical research it might take a couple of years to learn a new set of ideas and retool a lab,” he says. “Hence it wouldn’t be surprising if established researchers have trouble finding the time to do so.”

Ginsparg also wonders whether analysing the full text of papers might tell a different story. It could be that established researchers incorporate fresh ideas into an existing methodology and framework, and therefore mention them deeper in a paper.

Packalen, who published his first paper in 2010, knows that the findings could be tough for some older scientists to swallow. “I look at these findings and say, ‘No way is this going to happen to me’,” he says. “I’m going to stay innovative. I’m going to learn new ideas.”