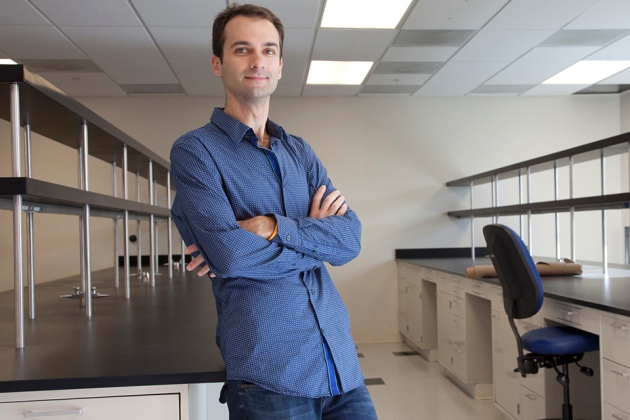 Ethan Perlstein founded a biotechnology company rather than pursuing a conventional academic path after his PhD.

Vindication was three years coming for Ethan Perlstein. On 19 October, his California biotechnology company, Perlara, announced a deal with Novartis. The Swiss drug giant will test a compound that Perlara has identified as a possible treatment for a rare childhood disease, and will invest an undisclosed sum in the smaller firm.

Numerous biotech investors turned Perlstein away before he started Perlara in San Francisco in 2014, because he wasn’t the tenured professor that most venture capitalists saw as founder material. “They pretty much told me to take a hike,” he recalls.

But he persevered, and is now part of the vanguard of young biomedical scientists who have started companies instead of taking the conventional academic path and pursuing postdoctoral studies after their PhDs. Among the factors driving this change are an infusion of money into early-stage biotech investing, the emergence of biotech incubators and the scarcity of academic jobs in science.

“We’re starting to see a renaissance of investors embracing the idea that scientists can build businesses,” says Ryan Bethencourt, programme director of IndieBio, a biotech accelerator in San Francisco that began in 2014.

Previously, Bethencourt says, investors preferred to fund companies started by established professors who focused on the science, while investors installed a management team to take care of the business side. But that has changed as crucial technologies, such as genetic sequencing, have become cheaper and lab work has become automated. The cost of starting biotech companies is falling, lowering the risk for investors to fund new science-based companies. IndieBio and Y Combinator — an information-technology incubator in Mountain View, California, that started accepting biotech companies in 2014 — provide funding and mentoring to entrepreneurs in exchange for shares in the companies.

Fork in the road

Y Combinator, which provides US$120,000 in seed funding per company, invested in Perlara this year; IndieBio, which provides $250,000 per start-up, has funded 42 companies in a variety of fields. Last year, biotech firms in the United States and Europe raised $3.5 billion in early-stage financing — more than in any previous year, according to the consultancy Ernst & Young. Much of this was from investors who have already made money in technology.

“Most of the venture guys I know want to change the world for the better,” says Dan Widmaier, co-founder and chief executive of Bolt Threads in Emeryville, California, which uses genetic engineering to manufacture textiles. Widmaier went to work for the company three days after completing his PhD in 2010. “As they see it, being able to serve up an ad faster probably isn’t changing the world for the better as much as being able to solve climate change or cure disease.”

“Most of the venture guys I know want to change the world for the better.”

Conventional academic paths are also becoming less appealing. On average, young scientists earn their first US National Institutes of Health R01 grant — the bread-and-butter support for most biomedical scientists — at the age of 42. When Anitha Jayaprakash earned her genetics PhD from the Icahn School of Medicine at Mount Sinai in New York City in 2014, she saw scientists all around her stuck in postdocs. Many had no hope of finding their own tenure-track academic jobs — a phenomenon that Perlstein has dubbed the “postdocalypse”. “It gave me a very depressing feeling about the whole academic space,” says Jayaprakash. So she started Girihlet, a genetic-sequencing company in Berkeley, California, that has received funding from IndieBio and other investors.

Alexander Lorestani felt the same way when he left a joint graduate and medical-degree programme in 2015 to co-found Geltor in San Leandro, California, which makes a vegan alternative to animal gelatin. He and his co-founder are 29 and 30 years old, and felt ready to use science to serve humanity. “I couldn’t imagine waiting another five to ten years to dive into doing what I think of as my life’s work,” Lorestani says.

It’s not an easy road. Most young biotech firms fail. Widmaier says that he never expected Bolt Threads to raise $90 million and last for 6 years. He says it has been rewarding to thrive long enough to be doing groundbreaking science — and to have a rare degree of independence. “Anywhere else, you join someone else’s vision for what a perfect workplace is,” he says. “The most valuable thing about building a company is that you get to build the place where you go to work every day.”