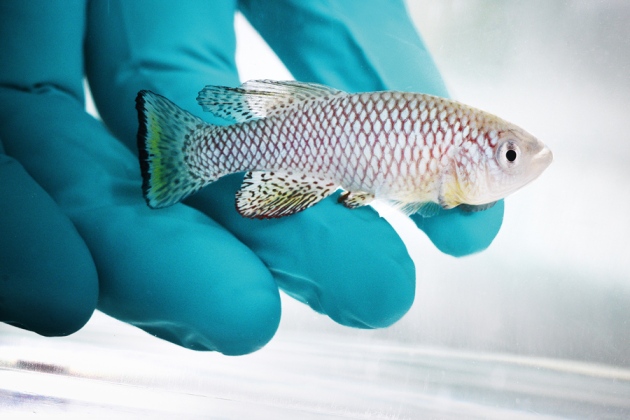 Turquoise killifish have short lives, but they can live longer with gut microorganisms from younger fish.

It may not be the most appetizing way to extend life, but researchers have shown for the first time that older fish live longer after they consumed microbes from the poo of younger fish. The findings were posted to the bioRxiv.org preprint server on 27 March1 by Dario Valenzano, a geneticist at the Max Planck Institute for Biology of Ageing in Cologne, Germany, and his colleagues.

So-called ‘young blood’ experiments that join the circulatory systems of two rats — one young and the other old — have found that factors coursing through the veins of young rodents can improve the health and longevity of older animals. But the new first-of-its-kind study examined the effects of 'transplanting' gut microbiomes on longevity.

“The paper is quite stunning. It’s very well done,” says Heinrich Jasper, a developmental biologist and geneticist at the Buck Institute for Research on Aging in Novato, California, who anticipates that scientists will test whether such microbiome transplants can extend lifespan in other animals.

Life is fleeting for killifish, one of the shortest-lived vertebrates on Earth: the fish hits sexual maturity at three weeks old and dies within a few months. The turquoise killifish (Nothobranchius furzeri) that Valenzano and his colleagues studied in the lab inhabits ephemeral ponds that form during rainy seasons in Mozambique and Zimbabwe.

Previous studies have hinted at a link between the microbiome and ageing in a range of animals. As they age, humans2 and mice3 tend to lose some of the diversity in their microbiomes, developing a more uniform community of gut microbes, with once-rare and pathogenic species rising to dominance in older individuals4.

The same pattern holds true in killifish, whose gut microbiomes at a young age are nearly as diverse as those of mice and humans, says Valenzano. “You can really tell whether a fish is young or old based on its gut microbiota.”

To test whether the changes in the microbiome had a role in ageing, Valenzano’s team ‘transplanted’ the gut microbes from 6-week-old killifish into middle-aged 9.5-week-old fish. They first treated the middle-aged fish with antibiotics to clear out their gut flora, then placed them in a sterile aquarium containing the gut contents of young fish for 12 hours. Killifish don’t usually eat faeces, Valenzano notes, but they would probe and bite at the gut contents to see whether it was food, ingesting microbes in the process.

The transplanted microbes successfully recolonized the guts of the fish that received them, the team found. At 16 weeks of age, the gut microbiomes of middle-aged fish that received 'young microbes' still resembled those of 6-week-old fish.

The young microbiome ‘transplant’ also had dramatic effects on the longevity of fish that got them: their median lifespans were 41% longer than fish exposed to microbes from middle-aged animals, and 37% longer than fish that received no treatment (antibiotics alone also lengthened lifespan, but to a lesser extent).

And at 16 weeks — old age, by killifish standards — the individuals that received young gut microbes darted around their tanks more frequently than other elderly fish, with activity levels more like 6-week-old fish. By contrast, gut microbes from older fish had no effect on the lifespans of younger fish, Valenzano and his team report.

Exactly how microbes influence lifespan is hazy, Valenzano says. One possibility is that immune systems wear out with age, allowing harmful microbes to out-compete more beneficial bacteria. A microbiome transplant might, then, reset a middle-aged fish’s microbiome. Components of a more youthful microbiome could also promote longevity by somehow influencing the functioning of the immune system itself, Valenzano adds.

“The challenge with all of these experiments is going to be to dissect the mechanism,” says Jasper. “I expect it will be very complex.” His laboratory is attempting microbiome swaps in differently aged fruit flies to test the impact on lifespan.

Robert Beiko, a bioinformatician who studies microbial communities at Dalhousie University in Halifax, Canada, hopes to get funding to see whether microbiome swaps influence ageing in mice, too. He also wonders whether an individual’s own microbiome, sampled and preserved early in life, can extend its lifespan when reintroduced later.

In humans, faecal transplants can help to treat some recurring infections, but Valenzano says it is far too early to consider the procedure for life extension. “I wouldn’t go that far. This is really early evidence that this has a potential positive effect.”