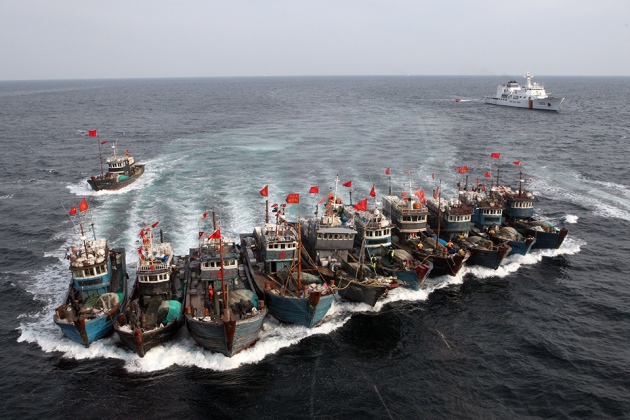 Chinese fishing boats are pursued by a South Korean coastguard vessel (top right) in the Yellow Sea in 2011; the nations have overlapping claims in the region.

China and South Korea have scheduled talks for 22 December to address a decades-long boundary dispute that has hampered research and exploration in the Yellow Sea. This northern part of the East China Sea, between mainland China and the Korean peninsula, is home to a rich ecosystem that is under intense environmental strain from human activities.

Confrontations over fishing rights in the disputed region have turned deadly — and research is not immune to the tension. South Korean scientists report that the Chinese coastguard has intercepted research vessels in the Yellow Sea and East China Sea on at least ten occasions, threatening their activities and forcing them to move east. At other times, the Chinese navy has shadowed South Korean research vessels. “The confrontations are happening all the time,” says marine sedimentologist Kyung-Sik Choi of Seoul National University.

The friction in the Yellow Sea is one of many marine territorial disputes in east Asia: over the past two years, China has captured the world’s attention with its construction of artificial islands in the South China Sea and a series of alleged rammings of local fishing boats by its coastguard and navy vessels. A spat with Japan over islands and gas fields in the East China Sea is also escalating, as China boosts its military presence and extraction efforts there.

In this particular case, both parties seem ready — at least publicly — to seek a solution. Chinese President Xi Jinping and South Korean President Park Geun-hye pledged in July 2014 to begin talks by the end of 2015.

“If the maritime boundary is fixed in some way, it will be good for scientists because we will know exactly where our playground is,” says Hyun-Chul Han, a marine geologist at the Korea Institute of Geoscience and Mineral Resources in Daejeon. “It will be a great relief and secure scientists’ safety.”

Few expect South Korea and China to fully resolve their dispute in this first round of talks. But some analysts say that boosting scientific ties between the nations in the Yellow Sea would be a feasible — and politically valuable — initial step. “Maybe this could be an area of low-hanging fruit that these talks could address, to at least point to some level of utility and productiveness,” says James Schoff, a senior associate at the Carnegie Endowment for International Peace in Washington DC.

The Law of the Sea

Under the 1982 United Nations Convention on the Law of the Sea, nations can claim exclusive rights to exploit resources in an exclusive economic zone (EEZ) within 200 nautical miles (370 kilometres) of their coasts. But because the Yellow Sea is less than 400 nautical miles in breadth, China and South Korea’s EEZs overlap, and they have never agreed to a boundary (see ‘Troubled waters’). Research vessels from both countries avoid straying across a line of longitude about halfway between Seoul and Qingdao, effectively dividing the Chinese and South Korean marine-science communities. The law does not in principle restrict purely scientific activities in another nation’s EEZ, but in practice, countries can quickly set these zones off-limits to others. 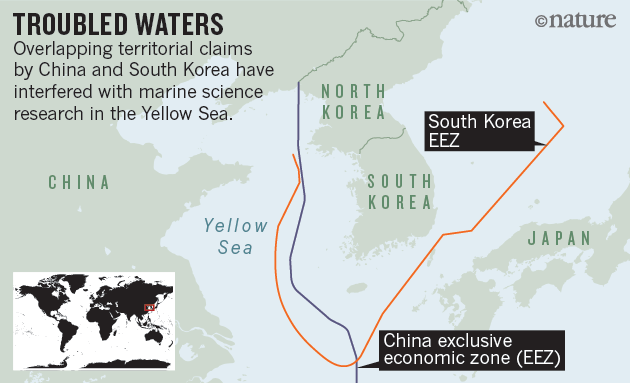 Chinese data covering the Yellow Sea look “cut in half” because of the dispute, says Zuosheng Yang, a marine geologist at the Ocean University of China in Qingdao.

In the past, China has rejected simply drawing a line that is equidistant from the two nations’ coasts. Instead, it claimed rights to about two-thirds of the Yellow Sea, based on the extent to which sediments billowing out from China’s Huang He and Yangtze rivers blanket the sea floor. This ‘silt line’ was met with howls of protest from South Korean scholars and received little international support. But the silt line has a practical significance: Chinese boats motor across it to escape the turgid, fish-poor sediment plumes, sometimes leading to fatal clashes with South Korea’s coastguard. In 2011, a Chinese fisherman stabbed a Korean coastguard to death with a shard of broken window glass; in a separate 2014 skirmish, the Korean coastguard shot and killed a Chinese fisherman.

The dispute has also prevented cooperation in assessing the deterioration of the Yellow Sea’s marine ecosystem. Dams in Chinese rivers have interrupted the once-steady flow of sediment and nutrients into the waters, and pollution has created enormous algal blooms. Urbanization has also claimed most of the tidal flats that once ringed the Yellow Sea basin, threatening key habitats for migratory birds.

Monitoring and management of the basin requires collaboration, says Paul Liu, an oceanographer at North Carolina State University in Raleigh. South Korean and Chinese ocean researchers do share some data through a joint marine-research centre in Qingdao, which has held workshops and coordinated some work since 1995. But when asked about the boundary dispute, Wei Zheng, the centre’s vice-director, said: “It still is a problem.” She declined to comment further, citing the sensitivity of the issue.

Choi, for example, says that he and his colleagues would like to conduct a deep seismic survey transecting the entire Yellow Sea. But he says that the project would need permission and protection from China’s coastguard to prevent passing fishing boats causing any damage to the kilometres-long cables and attached equipment.

Both Liu and Yang say that an agreement would similarly foster collaborations to look at how sediments have swirled across the Yellow Sea in the past, and how new dams on China’s rivers have changed that process. “The Chinese cannot only study the western side, or Koreans cannot only study the eastern side,” Liu says. “They have to work together to know the whole picture of the area.”