Scientists have read ancient scrolls not opened since they were carbonized by the eruption of Mount Vesuvius almost 2,000 years ago. Although only a few letters have been deciphered so far, classical scholars hope that the advance could lead to the rediscovery of lost Greek or Roman works of literature in hundreds of papyri that are too fragile to unroll and read.

“It is a revolution for papyrologists,” says Vito Mocella, a physicist at the Institute of Microelectronics and Microsystems in Naples, Italy, and a co-author of the study, which is published in Nature Communications1.

The eruption of Vesuvius in ad 79 obliterated the nearby towns of Pompeii and Herculaneum. But the volcanic ash preserved what it destroyed — including, in Herculaneum, a library in a lavish villa thought to have belonged to Julius Caesar’s father-in-law. The library contains hundreds of papyrus scrolls, dried and blasted by hot gases into what look like twisted logs of charcoal, and then buried deep under the ash.

The rediscovery of the library in 1752 caused a sensation because it offered a rare opportunity for direct access to ancient texts. Since then, scientists and classicists have sought to unroll the papyri and read their contents, destroying several scrolls in the process. Some were cut open or unrolled by machine, but many flaked apart or would not yield. Among the researchers who made an attempt was the English chemist Humphry Davy. In 1819 he visited Naples, where most of the papyri are stored, and tried to separate out the rolls using sulfur, iodine and chlorine — with no success2. 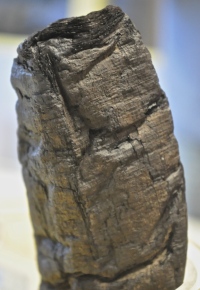 There were probably around 600–700 books in the library, says Daniel Delattre, a scholar at the Institute for the Research and History of Texts in Paris and a co-author of the latest study. He and others estimate that up to half of the library’s text has never been deciphered.

In 2009, Brent Seales, a computer scientist at the University of Kentucky in Lexington, made a first attempt to X-ray two closed scrolls3. The resulting images showed the interior of the papyri, revealing how the heat pressure of the eruption had cracked and crumpled the tightly wound material. Seales and his colleagues hoped to digitally ‘unroll’ a scroll, but the papyrus's internal whorls were so chaotic that the team could confidently reconstruct only sections of flattened surface. And no letters appeared, because the black, carbon-based ink on the scrolls absorbed X-rays to the same degree as the carbonized papyrus itself.

Mocella tried a different technique, called X-ray phase-contrast tomography. This is used in medicine to image the structures of soft tissues that do not absorb x-rays well, such as those in the brain, lungs and breast. It works by detecting contrast in how materials refract, rather than absorb, X-rays. Inside the Herculaneum scrolls, the inked letters are raised some 0.1 millimetres above the surface of the papyrus. That tiny bump was enough for Mocella’s team to make out the ink using coherent beams of X-rays from the European Synchrotron Radiation Facility in Grenoble, France.

The researchers were able to decipher an alphabet of Greek letters, and occasional words. Delattre compared the handwriting to that in other Herculaneum scrolls, and found a match with a scribe writing in the first century bc. Given that scribe’s activity in other scrolls, the new text is likely to be a copy of writing by the philosopher and poet Philodemus, who lived from 110 bc to around 40 bc. That would match up with what has been learned from the texts already translated. They are mostly written in Greek, and include a large amount of work by Philodemus, who saw himself as defending the teachings of Epicurus, a philosopher who lived two centuries earlier and built up a system of ethics based on a materialist view of the world.

The minds of the ancients

David Blank, a classicist at the University of California, Los Angeles, and a co-leader of the Philodemus Project to translate the Herculaneum scrolls, says: “The texts are very important for our understanding of Hellenistic philosophy” — philosophy in the Greek-dominated culture that was common to the former empire of Alexander the Great from his death in 323 bc, to the emergence of the Roman Empire. For historians, Philodemus’s descriptions of the workings of a first-century-bc philosophical school are also valuable.

Deciphering the rolled-up scrolls is still a slow, manual exercise, says Seales, who is working with Mocella’s team to do more scans, and has funding from the US National Science Foundation to create semi-automated software to help. “I believe that we will be able to read large sections,” he says.

In 1997, excavations revealed more rooms at the villa in Herculaneum, hinting that more scrolls might be found. But work has since stopped. Robert Fowler, a classicist at the University of Bristol, UK, says that the latest X-ray findings should impel Herculaneum’s management to get digging. “One of the arguments against proceeding with the excavation of the villa is that we would be unable to read any scrolls that might be discovered, and until then it would be better to leave them underground. Now we are on the edge of possessing that technology, and, since an excavation will take some time to arrange, we might as well get started,” he says.