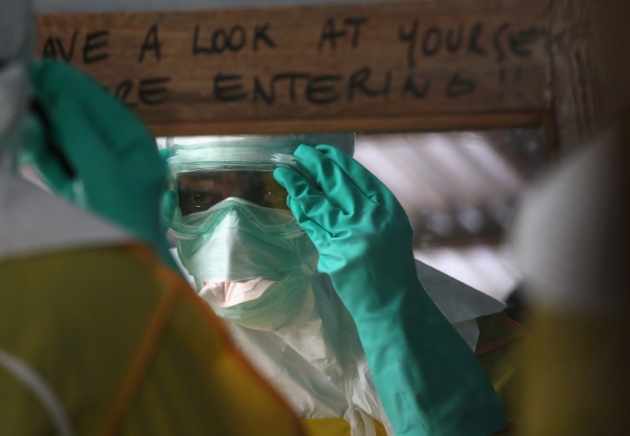 Dan Kelly felt as if he were entering a war zone when he arrived at Connaught Hospital on 19 August. His friend Modupeh Cole, the physician in charge of the Ebola isolation ward at the hospital in Freetown, Sierra Leone, had died six days earlier. Marta Lado, a doctor from Spain, was caring for the ward’s ten patients. “She was mopping the floors herself,” says Kelly, an infectious-disease physician and co-founder of the Wellbody Alliance, a non-profit health-care organization in Sierra Leone. The international aid group Médecins Sans Frontières has called the world’s response to the Ebola epidemic in West Africa “dangerously inadequate”. As Kelly travelled around Freetown, noticing closed clinics and health-care workers without adequate protective training and equipment, he had to agree.

“We’re lacking the kind of passionate humanitarian response that we’ve seen for disasters like the Haiti earthquake or the Haiyan typhoon” in the Philippines, says Kelly, who is raising money through the University of California, San Francisco, to teach infection-control practices to health-care workers fighting the outbreak. More than 240 health-care workers have contracted Ebola in the current episode, including a Senegalese epidemiologist who is the first person deployed by the World Health Organization (WHO) to become infected with the disease. “We’re around rock bottom,” says Kelly.

Weeks after the WHO declared the Ebola outbreak a public-health emergency of inter­national concern and the World Bank pledged to provide up to US$200 million in aid, enough resources to end the crisis have yet to materialize. The WHO reports that the Ebola outbreak has so far claimed 1,427 lives in four West African nations — more than all previous recorded outbreaks combined, and probably an underestimate (see ‘Out of control’). It says that the epidemic will last for another 6–9 months, and the scientists and doctors who are fighting it agree. “I can comfortably say that we will be in this for the next 4 to 9 months, not including the follow-up that will be required to deal with the post-traumatic effects,” says virologist Joseph Fair, a special adviser to the ministry of health in Sierra Leone.

To end the crisis, developed countries and aid groups need to send more people with expertise in treating infectious diseases, public-health experts say. In Monrovia, Liberia’s capital, only three Ebola treatment facilities were operating as of 22 August; the WHO says that, in the coming weeks, facilities will be needed to treat another 500 patients. The US Centers for Disease Control and Prevention in Atlanta, Georgia, has sent 60 people to West Africa to help with surveillance, disease tracking and education, but they do not treat patients. Health-care workers and experts are badly needed from other Western governments, says Sophie Delaunay, executive director of Médecins Sans Frontières in New York. Many institutions and aid groups are even removing doctors from the region out of concern for the physicians’ safety. 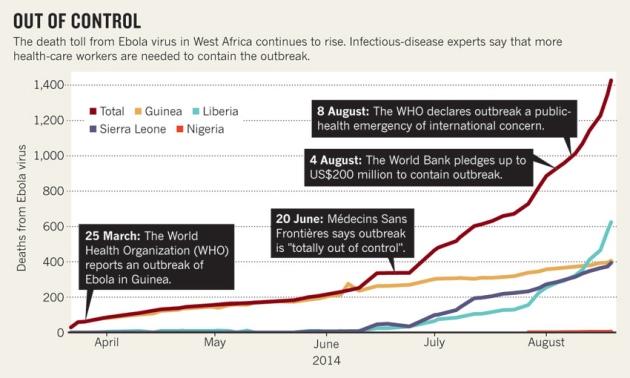 Affected countries must also do a better job of dealing with patients and educating the public about the disease, say doctors and scientists. Insensitivity on the part of government officials has sparked uprisings, including a riot in a quarantined neighbourhood of Monrovia on 20 August, says Bailor Barrie, co-founder of the Wellbody Alliance.

Officials are likely to make more progress fighting Ebola’s spread if they explain their actions and show concern for those affected, he adds, citing his own experience in a village in Kono, Sierra Leone, earlier this month. After a villager there tested positive for Ebola, police put two houses under quarantine — and six people fled. Barrie, along with community leaders and public-health workers, then visited the remaining 30 residents to explain the reason for the quarantine and to answer questions. One man said that he needed someone to go and buy cigarettes, and another needed palm wine; health officials tasked a worker with making these daily deliveries. The inhabitants stayed in quarantine for the full 21-day isolation period, even as three of them developed Ebola-like symptoms. Diagnostic tests were negative, and no one in the houses came down with the virus.

“When you don’t engage people, and just tell them what is right without listening to them, they will not comply with your orders,” says Barrie. “That’s why the initial response in some countries was full of denial, fear and terror — everyone was afraid.”

Fair says that governments also need to undertake widespread, country-wide campaigns, “blasting all forms of media — billboards, radio jingles, T-shirts, pens … basically, inundating the public with so much information that they can’t not hear it and remember it”.

But, ultimately, the most effective tactic to fight Ebola’s spread is to train West Africans in basic public-health measures, says Daniel Bausch, a physician at Tulane University in New Orleans, Louisiana, who has treated the disease in Guinea and Sierra Leone. “I’m not naive enough to think it’s an easy thing to do, but it’s the only thing that’s actually going to work,” he says.

The experience of groups such as Last Mile Health, a non-profit organization that operates in Boston, Massachusetts, and in Monrovia, shows that such training can work. Last Mile Health has deployed 150 community health workers to educate rural Liberians about Ebola. It has also worked to provide basic materials to care for patients. Rajesh Panjabi, the organization’s chief executive, says that in mid-August, nurses at the Martha Tubman Memorial Hospital in Zwedru — which serves 130,000 people in rural eastern Liberia — were preparing to strike over a lack of protective equipment. Last Mile Health provided gloves, masks, gowns and training in how to use them, and the nurses continued working. (Liberia’s ministry of health had estimated earlier this month that the country needs more than 451,360 pairs of medical gloves.) “This is the type of impact you can have through very basic activities, but it takes sustained response and investment,” says Panjabi.

There are other hopeful signs. At Connaught Hospital, nurses from countries including Sierra Leone have joined Lado, the physician leading the clinical effort of the King’s Sierra Leone Partnership, an initiative of the King’s Centre for Global Health in London. Two doctors and another nurse from the partnership will arrive at Connaught in the coming weeks. “We’re at the point where almost anything we do to turn this thing around will make things better,” says Kelly. “It’s got to be one hospital at a time.”