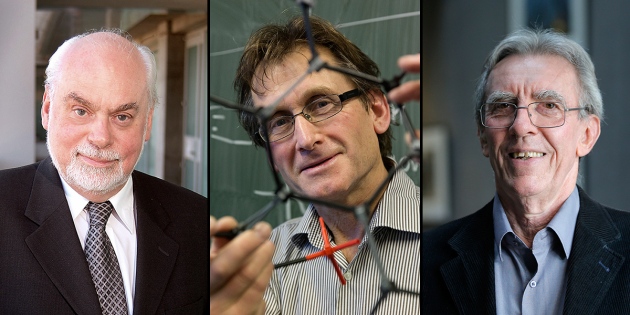 Three chemists who created tiny molecular machines have won the 2016 Nobel Prize in Chemistry for their intricate designs.

Jean-Pierre Sauvage, at the University of Strasbourg in France; Fraser Stoddart, a Scottish-born chemist at Northwestern University in Evanston, Illinois; and Bernard Feringa, at the University of Groningen in the Netherlands, share the award for their work in the 1980s and 1990s, when they pioneered efforts to miniaturize motors.

“I’m a bit shocked because it was such a great surprise. And I’m so honoured,” said Feringa in an interview with the Nobel Committee just after winning the prize.

The tiniest Lego: a tale of nanoscale motors, rotors, switches and pumps

The three have made molecular knots, shuttles, rotors, chains, pumps, axles, switches, memory devices and even a nanocar — all at the scale of molecules (see 'Nano machines'). The nanoscale machines are yet to find application, but researchers hope that their uses could range from delivering drugs to computer memory.

“It’s early days, of course,” Feringa told the Nobel Committee. “But once you are able to control movement, you have a motor, you can think of all kinds of functions.” He suggested that the machines could be used as tiny robots in the body to deliver drugs or detect cancerous cells; or as smart materials that could adapt or change depending on external signals.

"I applaud the fact that — for once in chemistry — Stockholm [where the Nobels are announced] has recognized a piece of chemistry that is fundamental in its making and being," Stoddart said at a press conference at Northwestern University, held later in the day.

Only a handful of laboratories are currently actively engaged in making nanomachines, says Dean Astumian, who studies the theory of molecular motors at the University of Maine in Orono. But he thinks the field will get a boost from the award. “The recognition that is afforded by a Nobel Prize is going to attract the best young people,” he says. Astumian thinks the work will provide applications within 25 years. “There’s no device that you can buy that’s made out of molecular machines. But they’re coming.”

In 1983, Sauvage’s group was the first to create molecular interlocking chains and rings — called catenanes — which were the first steps to creating the connected parts needed for molecular motors. By creating interlocking rings, Stoddart noted at his press conference, Sauvage's group effectively invented a new way to bind molecules together — a mechanical bond, rather than a chemical one. "New bonds are few and far between. They are really the blue moons," Stoddart said.

Stoddart himself, in 1991, created the first molecular shuttle: a ring-shaped molecule threaded onto an ‘axle’, called a rotaxane. The ring could shunt back and forth between two sites on the axle, which was capped at each end by stoppers, and Stoddart and other chemists figured out how to control that process, using changes in acidity, light or temperature.

Since then, Stoddart’s team has used similar rotaxanes to make a molecular ‘lift’, which can raise itself (by less than a nanometre) above a surface, and an artificial ‘muscle’, in which rotaxanes bend a thin sheet. The researchers have also used millions of rotaxanes to make a high-density memory device — in which the shuttles flick from an ‘on’ state to an ‘off’ state.

And in 1999, Feringa was the first to develop a synthetic molecular motor — a single molecule with paddle units connected by a carbon–carbon double bond. The paddles rotated, and kept on spinning, when the bond was broken with light. Feringa showed that the motors could have macroscale effects, such as rotating a glass rod sitting on top of them.

Perhaps most famously, Feringa has also created a four-wheel-drive ‘nanocar’ out of the motors.

A four-wheeled molecule moving on a metal surface

The Nobel winners' work — and other chemists' nanomachines — have also had an impact on researchers’ understanding of nature, Astumian says. In particular, the artificial systems have helped to demonstrate that all chemically-powered molecular machines, whether synthetic or biological, work according to the same principles: by selectively harvesting the random jiggles of Brownian motion, rather than pushing against them.

Asked by reporters at the Nobel press conference whether his machines would find a use, Feringa likened the creators of minuscule machines to the Wright Brothers, who made their maiden flight in a powered aircraft more than 100 years ago. “People were saying, why do we need a flying machine? Now we have a Boeing 747 and an Airbus. That’s a little bit how I feel. The opportunities are great.”

During his own press conference, Stoddart also took political swipes, both at recent UK anti-immigration rhetoric and at US Presidential candidate Donald Trump. He said that his old country, the United Kingdom, was “in a real mess because it thinks it can raise borders to people coming in". And referring to Trump's comment in his first debate with Hillary Clinton that not paying federal taxes would be "smart", Stoddart said that one-third of his Nobel earnings would go to taxes, because, he said, "I am not smart". 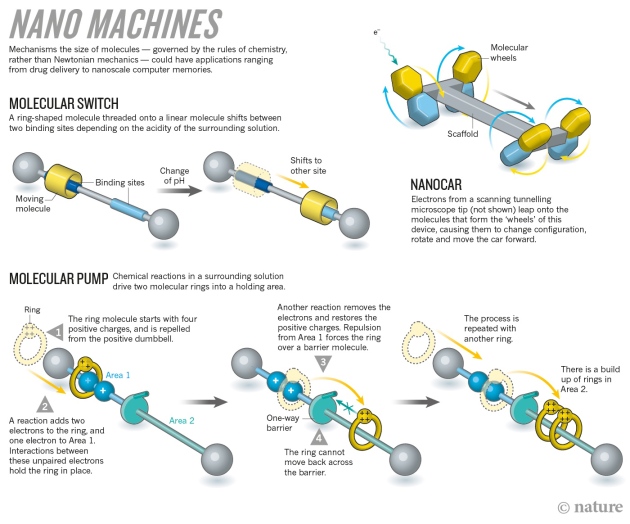 Comments from Fraser Stoddart and Dean Astumian have been added.