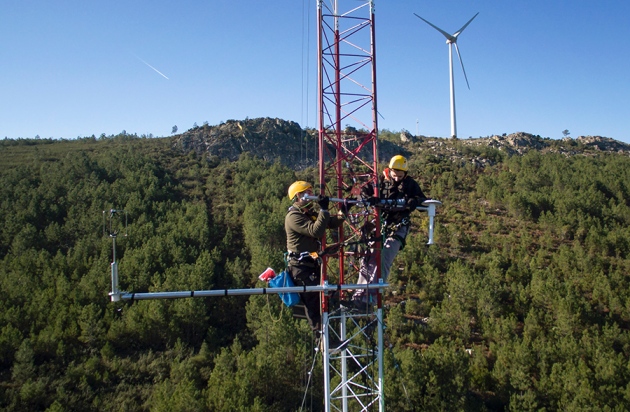 Machines have invaded a windswept rural valley in eastern Portugal. Squat white containers stare at the hillsides, sweeping lasers across the eucalyptus-studded slopes, and towers bristling with scientific instruments soar 100 metres into the air.

Their international team of minders will spend the next five months measuring nearly everything it can about the wind that blows through the site. An unprecedented arsenal of meteorological equipment will study speed, direction and other characteristics for the world’s most detailed wind-mapping project. The aim is to illuminate fundamental properties of wind flow over complex terrain, to help researchers improve atmospheric computer models and enable engineers to decide where to put wind turbines to get the most energy from them.

The results of the project, called Perdigão, should also improve models of how air pollution sinks into valleys and help drones and aircraft to navigate gusty mountain terrain.

“This will be utterly transformative in both understanding the physics of the atmosphere and also how to optimally use wind energy,” says Sara Pryor, an atmospheric scientist at Cornell University in Ithaca, New York, who works on the project. “It’s brilliant.”

By testing wind-flow models against the detailed data from Perdigão, researchers will be able to apply their findings in other locations. “Lessons learned will translate into improved atmospheric models for the entire wind-energy community,” says Sonia Wharton, a meteorologist at the Lawrence Livermore National Laboratory in Livermore, California.

Europe gets 11% of its total energy from wind. But just a 10% shift in wind speed can change the amount of energy produced by up to 30%, says Jakob Mann, a wind-energy researcher at the Technical University of Denmark near Copenhagen. And losses are greatest in hilly or forested regions. Mann leads the €14-million (US$14.9-million) New European Wind Atlas project, a collection of wind-mapping studies and experiments of which the project in Portugal is the largest.

Data from a 2015 pilot project shows wind speed and direction on two ridges at the Perdigão site.

A pilot experiment by the Perdigão team in 2015 found turbulence downwind of one ridge that affected wind patterns on the next — the sort of detail that can improve models of atmospheric flow, says José Laginha Palma, a wind-energy specialist at the University of Porto in Portugal and head of the project.

Such models have typically relied on measure­ments from a simpler field experiment based on and around a hill in Askervein, UK, in the 1980s. “We’re going to update and replace data going back 30 years,” says Palma.

Portugal has a well-developed wind industry, and the Perdigão ridges already host one turbine. Winds at the site generally sweep across and down two steep ridges at around 8 metres per second — but they can blow at up to 40 metres per second. One recent burst blew the door off a temporary office trailer on one of the ridges. Knowing where such gusts occur can help turbine engineers take advantage of the steady winds while avoiding damage by the biggest gusts, says Rebecca Barthelmie, a wind engineer at Cornell who is working at the site.

Much of the scientific equipment is already up and running, and researchers will install the rest throughout February. The set-up includes 54 masts outfitted with instruments to measure wind speed, direction, temperature, humidity and other factors, both along and perpendicular to the ridges, 20 times per second. And 22 instruments will study small-scale wind flow in three dimensions using the laser-based technique lidar. 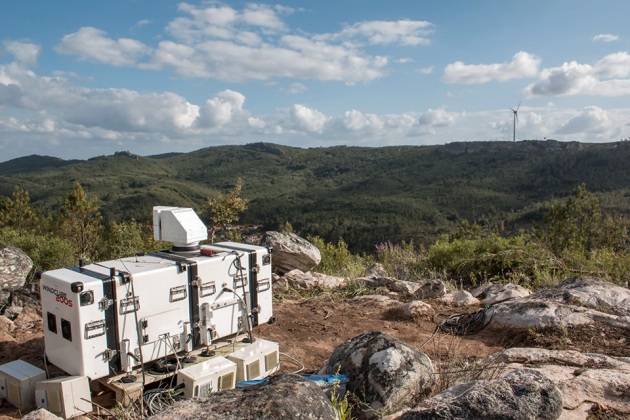 An instrument scans 3D wind patterns around the turbine on the opposite ridge using lasers.

Many studies have looked at wind patterns on the scale of 1 kilometre, but the Perdigão experiment is the first to push large-scale wind mapping down to resolutions of 100–500 metres, says Harindra Fernando, a fluid-dynamics engineer at the University of Notre Dame in Indiana.

He is co-leader of the US researchers working at Perdigão, who are funded with $3.4 million from the National Science Foundation. “What we are trying to do is portable to anywhere in the world,” he says.