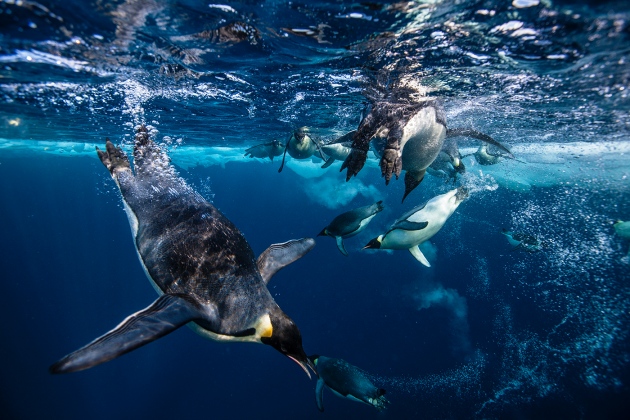 It is a milestone for ocean conservation and Russia’s relationship with the rest of the world. After years of unsuccessful talks, 24 nations and the European Union agreed on 28 October to create the largest marine reserve in the world, around twice the size of Texas, in the Southern Ocean off the coast of Antarctica.

The international deal takes effect in December 2017 and will set aside 1.55 million square kilometres of the Ross Sea, a deep Antarctic bay 3,500 kilometres south of New Zealand, from commercial fishing and mineral exploitation. It is the first time that countries have joined together to protect a major chunk of the high seas — the areas of ocean that are largely unregulated because they do not fall under the jurisdiction of any one nation.

Signed by members of the Commission for the Conservation of Antarctic Marine Living Resources (CCAMLR) amid cheering and applause at a meeting in Hobart, Australia, the deal became possible because of assent from Russia, which had long blocked the agreement. “Russian support of any agreement is a very positive signal in the current political situation,” says Peter Jones, a specialist on marine environmental governance at University College London.

Scientists hope now to see an acceleration of international marine-protection efforts around the globe, in particular, other ecologically precious regions around Antarctica. The designated reserve is a “first dent into the notion that we can’t do anything to protect the high seas”, says Daniel Pauly, a marine biologist at the University of British Columbia in Vancouver, Canada, who has long sounded the alarm over the state of the world's oceans and declining fish harvests.

Members of the CCAMLR had discussed the Ross Sea proposal since it was made by the United States and New Zealand in 2012. Observers think that Russia’s change of heart might have been the result of intense, behind-the-scene discussions on the issue in recent months between US secretary of state, John Kerry, and his Russian counterpart, Sergey Lavrov.

In politically turbulent times, Russia is “pleased to be part of this collaborative international effort”, Sergei Ivanov, special representative on ecology to the Russian President Vladimir Putin, told the BBC.

Although still relatively healthy, the Ross Sea has experienced a growth in fishing, which has begun to decimate stocks of the Antarctic toothfish (Dissostichus mawsoni), a predator. Also in decline is the Antarctic krill (Euphausia superba), a shrimp-like crustacean that is one of the largest protein sources on Earth and a key creature in the marine food web off Antarctica.

The deal includes some compromises. These might have been necessary to winning the support of Russia, which operates a large fishing fleet in the region, says Jones. Most of the reserve  — 1,117,000 km2 — will be closed to all commercial marine activities. But a further 322,000 km2 “krill research zone” will allow controlled fishing, known as “research fishing” and another 110,000 km2 will be a "special research zone” open for limited fishing of both krill and toothfish. This means that although the total area of the marine reserve is bigger than the next largest  — Papahānaumokuākea Marine National Monument near Hawaii — the area that is completely restricted is slightly smaller.

And for now, a ‘sunset clause’ specifies that the designated zone expires in 35 years, meaning it would not fully qualify as a marine protected area (MPA) under the strict rules set by the International Union for Conservation of Nature. “We do regret this,” says Mike Walker, project director of the Antarctic Ocean Alliance, a campaign group, in Washington DC. “But we are confident that decision-makers will come to realize that the best way to conserve the ocean is to protect it forever.” 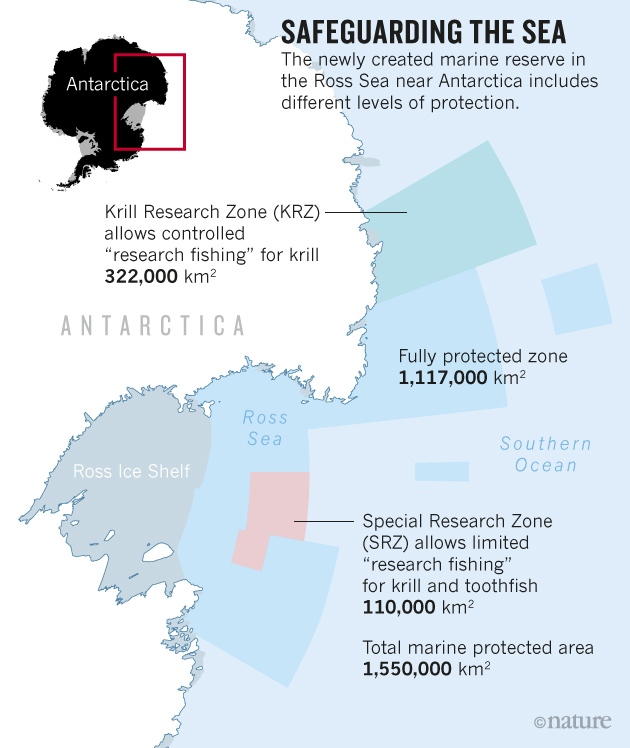 On the whole, scientists reacted enthusiastically to the decision. “This is unprecedented protection for the Southern Ocean,” says Kirsten Grorud-Colvert, a marine biologist at Oregon State University in Corvallis.

The Ross Sea contains one of the least-altered ecosystems on Earth, she says. But that ecosystem is vulnerable to human disturbance and the effects of climate change. “Setting aside an area free from fishing stresses in this marine reserve provides a reference point and a place for research to evaluate how systems respond to climate change and to learn how to foster resilience,” she says.

“It means we will protect one of the last parts of the world with a functioning natural ecosystem, with a complete array of marine mammals, seabirds and other marine life,” adds Pauly.

But others caution that ocean protection zones alone will not stop the decline in marine biodiversity, and do not provide a solution to overfishing because they may just move fishing to another spot.

“If fishing is the problem then they should reduce fishing pressure, not move it around,” says Ray Hilborn, a fisheries specialist at the University of Washington in Seattle. “Indeed, MPA might also stand for ‘Move Problems Elsewhere’.”

The CCAMLR will discuss further proposals next year to create protected zones of roughly similar size off the coast of East Antarctica and in the Weddell Sea. Chile and Argentina, meanwhile, are working on a proposal to protect the high seas surrounding the Antarctic Peninsula, the most rapidly warming part of the frozen continent.

An earlier version of this story misstated the year that the United States and New Zealand made the Ross Sea proposal.