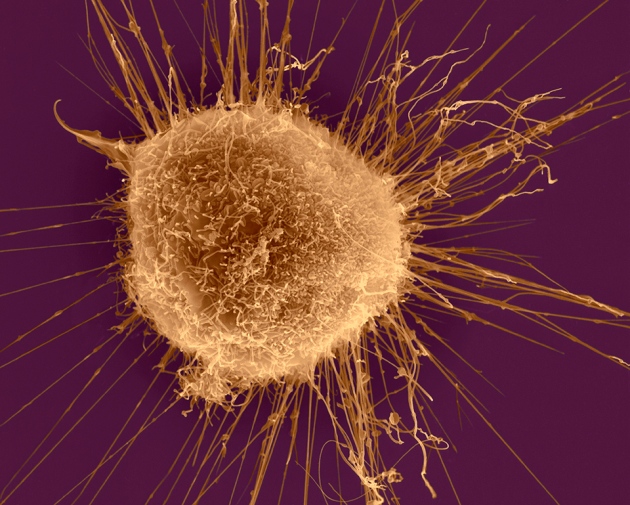 The challenges include mapping cancer cells such as this one from a breast tumour.

How can you distinguish between deadly cancers that need treatment and benign cancers that do not? Can unknown carcinogens be identified by the molecular fingerprints that they leave in tumours? Could vaccines be used to prevent more cancers?

The world’s largest cancer charity hopes to find out. On 12 October, Cancer Research UK (CRUK) in London announced its intention to dedicate at least £100 million (US$153 million) over 5 years to funding research teams to take on these and four other ‘grand challenges’. The targets were identified by a panel of independent international researchers convened by the charity, which received input from the wider community. Research teams can have members from anywhere in the world, but must include a UK-based contingent.

The charity will continue to fund projects proposed by investigators. But its new grand-challenge approach is in keeping with the times, says Nic Jones, the charity’s chief scientist. “There’s a cultural change happening within biological sciences,” he says. “The idea is to be bold and take risks, and do things that might not work and might take a long time.”

That idea is sweeping the globe: other prominent efforts have issued ‘grand challenges’ that tasked researchers with, among other things, devising ways to track the rise of antibiotic resistance and keeping tabs on all asteroids that pose a threat to human populations.

The movement has its roots in a series of 23 challenges issued by mathematician David Hilbert in 1900, which are credited with setting the course for twentieth-century mathematics. Then, in 2003, the Bill & Melinda Gates Foundation, based in Seattle, Washington, resurrected the idea with its vaunted Grand Challenges in Global Health programme, dedicating US$450 million to achieve 14 broad goals that included creating new vaccines and improving nutrition. Since then, the foundation has awarded 1,752 grants in 81 countries under its grand-challenges banner.

The model has been taken up around the world by governments, charities and universities looking to tackle big societal problems — and get a little publicity in the process. “The term has become sexy,” says Abdallah Daar, a public-health specialist at the University of Toronto in Canada who helped to craft the Gates Foundation challenges. “It has this element of bigness and difficulty and gets attention. And when people win, there’s a big announcement.”

Daar notes that the CRUK programme stands out for its focus on basic research. Although each of the challenges could eventually contribute to clinical innovations, most of them focus on laying the groundwork for therapeutic advances.

One challenge, for example, aims to develop ways to map the cellular make-up of a tumour. DNA sequencing studies have shown that the population of cells in a tumour is genetically diverse — and the genes lurking in those cells could determine whether the cancer will become resistant to specific drugs. Understanding the cellular topography could help physicians select the right treatment.

Another grand challenge asks researchers to find a way to deliver large molecules — such as certain proteins or RNAs — to any cell in the body. Although some large molecules, for example antibody therapies, are already used to treat cancer, they tend to operate outside the cell. “We know how to introduce these molecules in cell culture,” says Tyler Jacks, director of the Koch Institute for Integrative Cancer Research at the Massachusetts Institute of Technology in Cambridge. “If we could only do that in the body, we might be able to open up the door to all sorts of new types of therapy.”

Other challenges are more specific: one, to eradicate cancers linked to the common Epstein–Barr virus, casts a spotlight on a cause of cancer that is particularly important in developing nations. And the charity’s team of advisers has challenged researchers to design a drug that will block a cancer-associated protein called MYC. That is no simple task: researchers have been trying to do it for decades without success, and MYC is typically classified as an ‘undruggable’ target. But the hope, says Jones, is that methods uncovered in the attempt could also be applied to other elusive targets.

CRUK intends to issue new challenges each year, and Jones hopes that suggestions from the next round will come from the community. Crafting a tractable yet inspiring challenge is an art, says Richard Klausner, chief medical officer of biotechnology company Illumina in San Diego, California, and chair of the CRUK challenge-selection committee. A few of Hilbert’s mathematical challenges remain unsolved more than a century after they were proposed; to avoid a similar outcome, Klausner says, the committee tried to avoid setting unattainable goals.

“You want it to be ambitious enough, but not crazy,” he says. “They need to be at the edge of doable — but still doable.”