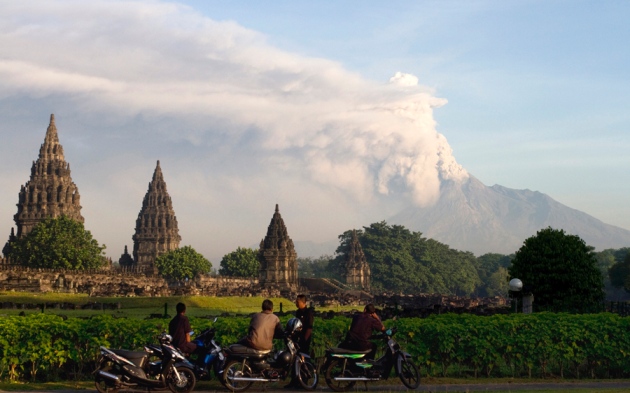 Mount Merapi, the most active volcano in Indonesia, erupts every few years.

Swept away by mudslides, entombed in lava or suffocated under ash, nearly 280,000 people have died in volcanic eruptions during the past four centuries, but only now has humanity managed to quantify the risk posed by these fiery phenomena. The first detailed assessment of global volcanic risk — part of a larger international hazard assessment released on 4 March by the United Nations Office for Disaster Risk Reduction — aims to save lives by providing better information for risk planners and by showcasing effective response measures.

“For the first time, we really have a shared understanding of volcanic activity at the global scale,” says Jean-Christophe Komorowski, a volcanologist at the Institute of Earth Physics in Paris, who contributed to the report. “This is a major turning point.”

Eight hundred million people live within 100 kilometres of a volcano that could erupt. But the hazards differ greatly from place to place. High in the snow-capped Andes, an eruption might melt ice and send floodwaters rushing into nearby villages. In southeast Asia, a powerful eruption might blast ash over a wide area, causing roofs to collapse under the weight.

The report aims to put hard numbers on exactly who is at risk. It comes from a UK-led international network of institutions called the Global Volcano Model, working with the International Association of Volcanology and Chemistry of the Earth’s Interior.

Team leaders sifted through a database of nearly 9,500 eruptions over the past 10,000 years kept by the Smithsonian Institution in Washington DC. They noted how often a particular volcano had erupted and what kind of physical hazards it posed. Then they tallied the number of people who now live within 10, 30 and 100 kilometres of that volcano and whether they live in places where eruptions have killed people before (see ‘Mass destruction’). The result is a complete catalogue of the highest-risk volcanoes and a list of countries ranked by the number of residents in harm’s way. 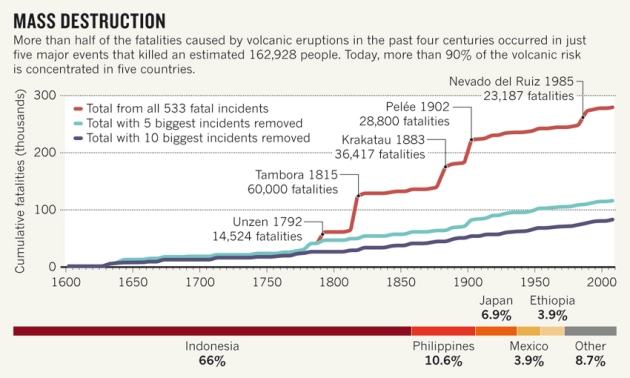 Researchers were surprised to find risk in places not typically thought of as highly volcanic. The Auvergne region of France, for instance, has been quiet in historic times. But it has had eruptions in the past few thousand years, putting it relatively high on the hazard scale because so many people live nearby. In New Zealand, the Auckland volcanic field — the eruptive history of which is not particularly well known — lies directly under the country’s biggest city.

“Volcanoes are extremely attractive areas to live,” says Jenni Barclay, a volcanologist at the University of East Anglia in Norwich, UK. Volcanic soil is often fertile and the altitude provides good living conditions in hotter climates.

Worldwide, 62 volcanoes fell into the highest risk category, meaning that they have been recently active and lie close to a lot of people. Indonesia tops the list of most threatened countries, with 77 historically active volcanoes, including Mount Merapi, which erupts frequently near the city of Yogyakarta.

But by a different measure, small volcanic islands — such as Montserrat in the Caribbean — are the most vulnerable. When these island nations start to rumble, all their citizens must flee or risk death. In these places, uncertainty has its cost: a controversial 1976 evacuation of the Caribbean island of Guadeloupe left residents angry when no major eruption happened.

Just because a volcano ranks as hazardous does not mean that people living near it are sitting ducks. If a volcano has enough scientific monitoring equipment on it, and a well-organized local response, then the risk to human life can be reduced, says Stephen Sparks, a volcanologist at the University of Bristol, UK, and a lead author of the report. At Merapi in 2010, the authorities used information about physical changes in the volcano to evacuate hundreds of thousands of people before a large eruption, saving many lives.

“We want to showcase what volcanologists around the world are doing,” says Sue Loughlin, a volcanologist at the British Geological Survey in Edinburgh and another leader of the survey.

In Ecuador, around the Tungurahua volcano, local volunteers serve as a network of vigías or ‘volcano watchers’. They watch for changes in the mountain and radio in to the nearby volcano observatory every evening with their reports (J. Stone et al. J. Appl. Volcanol. 3, 11; 2014). Such initiatives could translate to other volcanically active regions, says Barclay. “We can learn much more by bringing all this knowledge together.”