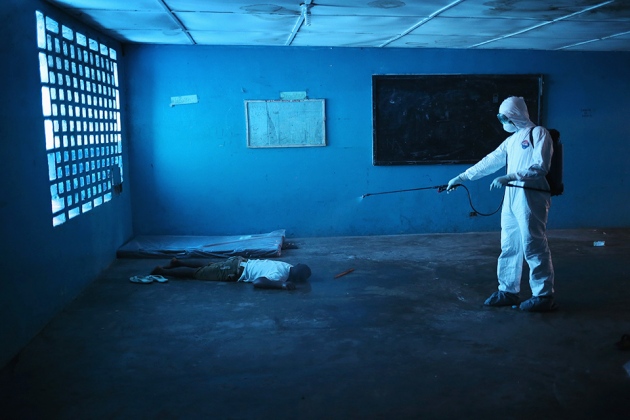 A health worker disinfects a corpse in Monrovia, Liberia, during the recent Ebola outbreak.

Three years after the start of the world’s worst Ebola epidemic, the World Health Organization (WHO) has created a programme to improve its response to disease outbreaks and to prevent another such calamity.

In June, WHO director-general Margaret Chan named medical epidemiologist Peter Salama to lead a new health-emergencies programme intended to streamline the agency’s response to crises. As part of that programme, the WHO has launched the Emerging Diseases Clinical Assessment and Response Network (EDCARN) to provide guidance on how to care for people during disease outbreaks.

Global-health experts say that the changes are a step in the right direction, but both developing and wealthy nations must do much more to avert another devastating epidemic. Some are also concerned that the WHO programme will have trouble getting the funding it needs to succeed, because of a lack of monetary support from member nations.

“African countries are still so dependent on international and global outfits that the return of Ebola or any other disease will be another déjà vu of national unpreparedness,” says virologist Oyewale Tomori at Redeemer’s University in Ede, Nigeria.

Tomori says that many developing nations still don’t have sufficient capacity for recognizing and responding to an emerging infectious disease.

The WHO’s new programme aims to strengthen local health systems and to bridge global, organizational and governmental efforts to prevent the next outbreak. Daniel Bausch, EDCARN’s technical lead, says that the network aims to fill huge gaps exposed during the Ebola crisis: a lack of knowledge about how best to care for people who have such serious diseases, and a shortage of physicians and experts who are prepared to provide that care.

“Clinical management of patients during infectious-disease outbreaks has been one of the neglected areas of public health,” Bausch says. “We’ve realized that it’s one of the many areas where international support is extremely important.”

So EDCARN is bringing together specialists in diseases that are likely to spark outbreaks — including Ebola, Middle East respiratory syndrome (MERS) and Crimean–Congo haemorrhagic fever. These people could be deployed to affected areas along with nurses, logistics experts and infection-control specialists to advise non-governmental agencies, governments and others on the ground who would be caring for patients.

The hope is that this will prevent some of the problems with patient care and health-worker protections seen in the Ebola epidemic, in which many local and foreign health workers were among the 11,310 who died.

Public-health policy analysts, such as Lawrence Gostin at Georgetown University in Washington DC, are optimistic about EDCARN. “I think it is a helpful initiative, and is in line with some of the ideas put forward by the Ebola commissions,” says Gostin, who served on two of the five international panels that have recommended major reforms to the global-health system in the wake of the Ebola crisis.

Other health initiatives that were started in the aftermath of the Ebola epidemic have run into problems, which have tempered expectations for EDCARN. A US-led effort to boost domestic health systems has met with local resistance, and a WHO-led programme with similar goals does not have enough long-term funding to keep going, Gostin says.

To succeed, the WHO’s new health-emergencies programme must raise US$485 million for the 2016–17 fiscal year, and is currently only 56% funded. Gostin hopes that stinginess among the WHO member countries won’t doom the fledgling attempts to head off another crisis.

This article originally stated that a funding shortfall pertained to EDCARN. But it is the overarching WHO health-emergencies programme that is currently underfunded. This story has been updated to reflect that.