Governments from more than 90 countries have agreed to establish an independent panel of scientists to assess the very latest research on the state of the planet's fragile ecosystems. The decision, which will create a body akin to the Intergovernmental Panel on Climate Change (IPCC), was made in Panama City this weekend, after years of negotiations.

The Intergovernmental Platform on Biodiversity and Ecosystem Services (IPBES) will be responsible for producing international scientific assessments on issues such as ocean acidification and pollination, to help policy-makers to tackle the global loss of biodiversity and degradation of ecosystems. 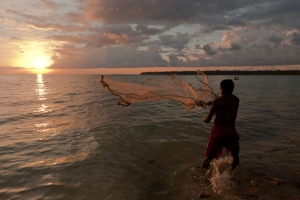 Fishing communities have their livelihoods put at risk by loss of biodiversity. An intergovernmental panel aims to tackle that threat.

“I hope that this body will allow biodiversity to be better taken into account in sustainable-development strategies, as the IPCC has for climate change over the past 20 years,” says Irina Bokova, director-general of the United Nations Educational, Scientific and Cultural Organization (UNESCO), based in Paris.

The themes of the panel's assessments, along with its overall budget, are to be decided at the newly established body's first plenary meeting, which is scheduled for 2013. But the IPBES will begin work immediately on reviewing existing assessments — such as 2005's global Millennium Ecosystem Assessment — to analyse their scope and impact on policy.

Biodiversity researchers welcomed the move. “Our community sees this as an extremely important step in order not to waste any time until the first plenary meets,” says Anne Larigauderie, executive director of DIVERSITAS, an international biodiversity research programme headquartered in Paris.

The annual IPBES budget has not yet been confirmed, but proposals range from US$5 million to $13 million. A trust fund will be set up to receive voluntary contributions committed by governments, United Nations organizations, the private sector and foundations.

Germany won the vote to host the IPBES secretariat, which will be headquartered in Bonn. The German government beat four other contenders, including India and South Korea, with its promise to provide annual contributions of $1.3 million for IPBES activities, and further funding for conferences, travel costs and capacity building in developing nations.

A multidisciplinary panel of experts will perform the IPBES's scientific and technical activities, and will not be controlled by the secretariat. “This will ensure scientific independence,” says Larigauderie.

Governments will make the final decisions as to which scientists will sit on the panel, but scientific bodies such as DIVERSITAS will be invited to make nominations. Selection procedures have yet to be agreed. “It will be key to have a selection process for nominations based on the highest scientific credentials,” says Larigauderie.