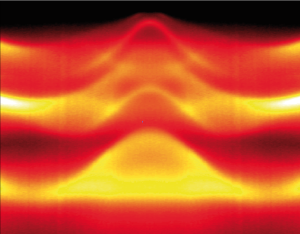 This plot of the energy levels of electrons in trisodium bismuthide show that this bulk material has properties similar to those of the sheets of carbon atoms known as graphene.

Researchers have replicated the electronic feats of graphene — the atomically thick layers of carbon — in two different three-dimensional crystals. The materials could facilitate the manipulation of electrons in future 'spintronic' devices, an emerging technology in which circuits carry information using electrons' magnetic fields rather than in their electric charges.

The energy levels of electrons on the surface of graphene are unusual because they connect together in cone-shapes rather than being separated, flat bands. The spots at which two cones meet are known as Dirac points, and they allow electrons to flow more freely by moving between energy levels. Electrons in the material are relativistic — meaning that their velocity can be considered a key constant within the material, not unlike the part played by the speed of light in the equations of the theory of quantum mechanics.

These properties belong to electrons moving on graphene’s 2D structure, but are not shared by those in three-dimensional (3D), or bulk, carbon minerals, such as graphite or diamond. In 2007, theoretical physicists at the University of Pennsylvania (UPenn) in Philadelphia predicted that certain semi-metals — materials with electronic properties that are intermediate between those of metals and those of electrical insulators— could contain Dirac cones, and have relativistic electrons, in three dimensions1. Last autumn, three groups reported experimental evidence for the existence of these 'Dirac semi-metals' in preprints posted to the arXiv server2, 3, 4. One of the papers, which reported work with crystals of trisodium bismuthide, has now been published in Science5. (The other two groups worked with cadmium arsenide crystals.)

“It’s really significant progress that these materials are there and it opens the door to elicit what their properties are,” says theorist Charles Kane, part of the group at UPenn that predicted 3D graphene analogues in 2007.

Condensed-matter theorist Eugene Mele, another member of the UPenn team, says that all three papers are valid demonstrations of Dirac semi-metals, but that the trisodium bismuthide report is the most convincing.

To prove that the energy levels of the materials' electrons had the claimed structure, researchers in all three groups studied photons that had interacted with electrons in the interior of the crystals. It is challenging to unravel the patterns of photons that have interacted with the bulk of a material — as opposed to just its surface — and the trisodium bismuthide group solved this problem by carefully tuning the energy of the emitted light, which came from the Advanced Light Source at California's Lawrence Berkeley National Laboratory.

Although the electronic structure of these materials is in some ways similar to that of graphene, their electrons are expected to have stronger coupling between their electronic and magnetic properties, says Yulin Chen, a physicist at the University of Oxford, UK, who took part in the work on trisodium bismuthide5. Their magnetic spins could therefore be manipulated by applying an electric field. This might make them useful in spintronics, an emerging technology in which information is encoded in the spins, or magnetic orientations, of electrons and atoms, meaning that less electrical power is needed to save it. The materials also respond strongly to magnetic fields, which might make them candidates for storing data in high-density computer hard drives.