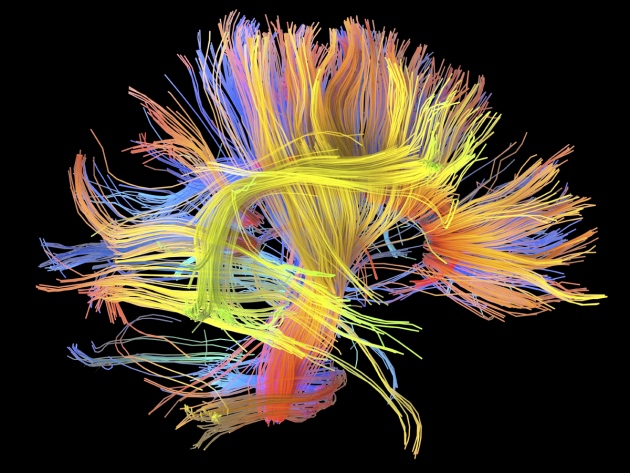 A  'connectome' of the brain shows active connections between neurons.

The brain’s wiring patterns can shed light on a person’s positive and negative traits, researchers report in Nature Neuroscience1. The finding, published on 28 September, is the first from the Human Connectome Project (HCP), an international effort to map active connections between neurons in different parts of the brain.

The HCP, which launched in 2010 at a cost of US$40 million, seeks to scan the brain networks, or connectomes, of 1,200 adults. Among its goals is to chart the networks that are active when the brain is idle; these are thought to keep the different parts of the brain connected in case they need to perform a task.

In April, a branch of the project led by one of the HCP's co-chairs, biomedical engineer Stephen Smith at the University of Oxford, UK, released a database of resting-state connectomes from about 460 people between 22 and 35 years old. Each brain scan is supplemented by information on approximately 280 traits, such as the person's age, whether they have a history of drug use, their socioeconomic status and personality traits, and their performance on various intelligence tests.

Smith and his colleagues ran a massive computer analysis to look at how these traits varied among the volunteers, and how the traits correlated with different brain connectivity patterns. The team was surprised to find a single, stark difference in the way brains were connected. People with more 'positive' variables, such as more education, better physical endurance and above-average performance on memory tests, shared the same patterns. Their brains seemed to be more strongly connected than those of people with 'negative' traits such as smoking, aggressive behaviour or a family history of alcohol abuse.

Marcus Raichle, a neuroscientist at Washington University in St Louis, Missouri, is impressed that the activity and anatomy of the brains alone were enough to reveal this 'positive-negative' axis. “You can distinguish people with successful traits and successful lives versus those who are not so successful,” he says.

But Raichle says that it is impossible to determine from this study how different traits relate to one another and whether the weakened brain connections are the cause or effect of negative traits. And although the patterns are clear across the large group of HCP volunteers, it might be some time before these connectivity patterns could be used to predict risks and traits in a given individual. Deanna Barch, a psychologist at Washington University who co-authored the latest study, says that once these causal relationships are better understood, it might be possible to push brains toward the 'good' end of the axis.

Van Wedeen, a neuroscientist at Massachusetts General Hospital in Boston, says that the findings could help to prioritize future research. For instance, one of the negative traits that pulled a brain farthest down the negative axis was marijuana use in recent weeks. Wedeen says that the finding emphasizes the importance of projects such as one launched by the US National Institute on Drug Abuse last week, which will follow 10,000 adolescents for 10 years to determine how marijuana and other drugs affect their brains.

Wedeen finds it interesting that the wiring patterns associated with people's general intelligence scores were not exactly the same as the patterns for individual measures of cognition — people with good hand–eye coordination, for instance, fell farther down the negative axis than did those with good verbal memory. This suggests that the biology underlying cognition might be more complex than our current definition of general intelligence, and that it could be influenced by demographic and behavioural factors. “Maybe it will cause us to reconsider what [the test for general intelligence] is measuring,” he says. “We have a new mystery now.”

Much more connectome data should emerge in the next few years. The Harvard Aging Brain Study, for instance, is measuring active brain connections in 284 people aged between 65 and 90, and released its first data earlier this year2. And Smith is running the Developing Human Connectome Project in the United Kingdom, which is imaging the brains of 1,200 babies before and after birth. He expects to release its first data in the next few months. Meanwhile, the HCP is analysing genetic data from its participants, which include a large number of identical and fraternal twins, to determine how genetic and environmental factors relate to brain connectivity patterns.