An implant that can be wirelessly programmed to release drugs inside the body has been successfully tested in humans. Researchers say that the device could save patients from the painful ritual of daily injections.

In trials on seven Danish women with osteoporosis, the implant delivered daily doses of the drug teriparatide, which stimulates bone formation. Researchers showed that over the course of one month, the implant was able to deliver up to 20 doses with the same levels of safety and therapeutic benefits as regular injections. The results are published today in Science Translational Medicine1. 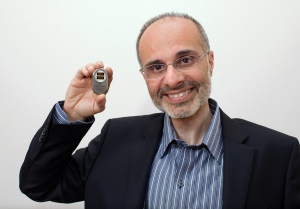 One of the main issues in treating osteoporosis is compliance: patients are normally required to give themselves daily injections of teriparatide, and only one-quarter stick to the two-year regimen, says Robert Farra, president of MicroCHIPS, a company based in Waltham, Massachusetts, that was spun out of the Massachusetts Institute of Technology in Cambridge to develop the implant. “The exciting thing about this kind of chip-based system is it provides 100% compliance,” he says.

Measuring 5 centimetres long and 3 centimetres wide, the device can be implanted in just 30 minutes under local anaesthetic in a doctor’s office. The chip holds 20 pinprick-sized reservoirs, each containing a 600-nanolitre dose of the drug. Each reservoir is sealed behind a set of 20 apertures covered with a thin layer of platinum and titanium. In response to either a preprogrammed timer or a wireless command, the device applies a current to one or more of these apertures, causing the metal membrane to melt and re-solidify like a fuse, and releasing the drug.

Passive drug-delivery implants are already available in the form of osmotic pumps or bio-erodible devices that slowly break down in the body to release drugs, says Geoff Smith, head of pharmaceutical technologies at De Montfort University in Leicester, UK. But the ability to control the amount and timing of drug delivery actively would be beneficial to both doctor and patient, he says, allowing them to respond to changes in the patient's condition, for example to manage pain. To some extent skin patches could also achieve this, “but the problem is that the skin is, thankfully, a very good barrier. So drug molecules over a certain size can’t go through very easily,” says Smith.

The MicroCHIPS implant enables active control of drug dose through its wireless programming, and that function was tested in the trial, although it is not really necessary for osteoporosis treatment, says Farra. It is also possible to have an entire pharmacy on the chip, delivering different drugs when needed. MicroCHIPS is now looking at incorporating sensors into the implants to allow them to respond to metabolic changes, such as variations in blood glucose levels.

A key concern about this kind of implant is whether the drug can enter the bloodstream effectively, given that the body tends to encapsulate implants in a protective layer of fibrous cells. But in the trials, bone-marker and pharmacokinetic evaluations suggested that the drug had no problem diffusing through this layer and into the blood vessels, says Farra.

The reliability and durability of the device have still to be established, notes John Watson, a bioengineer and founder of the William J. von Liebig Center for Entrepreneurism and Technology Advancement at the University of California, San Diego, in an editorial accompanying the study2. Making sure that the drug-release mechanism is reliable is crucial in the development of such devices, says Smith. “If the drug was very potent, you wouldn’t want it to ‘dose dump’. And if your life depended on the drug, you wouldn’t want it to fail either.” In the latest study, an eighth device failed to work and was excluded from the results, although there was no danger to the patient.

MicroCHIPS is now working on a design that has enough reservoirs for a year’s supply of doses. The company hopes to have a version ready to begin regulatory testing by 2014, says Farra.