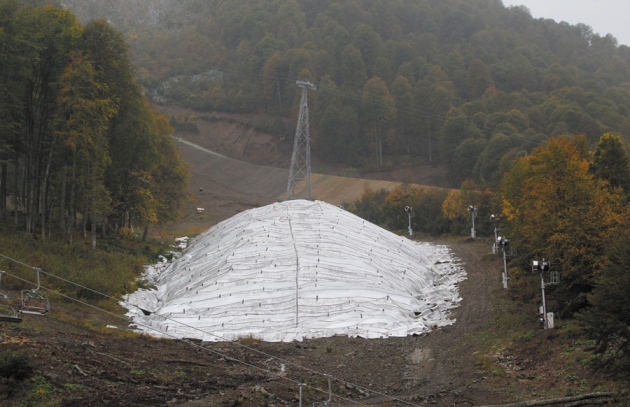 Snow has been stockpiled for the Olympic Winter Games in Sochi, Russia, for a year.

Skiers, snowboarders and other athletes got a bit of a shock when they arrived in Sochi, Russia, for the 22nd Olympic Winter Games. On the way into town from the airport, competitors passed rows of palm trees that thrive in the breezes blowing off the Black Sea. Forty kilometres away, on the ski slopes of Rosa Khutor, Sochi organizers have spent a year stockpiling manufactured snow as a hedge against the region’s mild climate.

Meteorologists may scoff at the decision to hold a winter sporting event in a city where February averages a balmy 6 °C and temperatures hover just above freezing in the nearby mountains. But Sochi and its massive snow-making operation offer a glimpse of the future of skiing and the pressures that will confront Olympic planners as the world heats up.

“We know things are going to get warmer, and eventually, when you have temperatures above freezing more commonly than not, you’re going to see less snow,” says David Robinson, a hydro-climatologist who runs the Global Snow Lab at Rutgers University in Piscataway, New Jersey. In the Northern Hemisphere, the snow season has shrunk by about three weeks since the early 1970s (see ‘Shorter winters’), and snow cover is projected to decline substantially by the end of the century, according to a report released in September by the Intergovernmental Panel on Climate Change.

There is considerable uncertainty in regional forecasts for individual skiing regions, but climate researchers say that models agree on broad patterns. “By the second half of the twenty-first century, the models suggest we’ll be seeing really big changes in temperature and precipitation,” says Martin Beniston, a climate physicist at the University of Geneva in Switzerland. Already, signs of an unwelcome thaw have appeared at even the highest elevations. This season, the Verbier 4 Vallées resort in Switzerland eliminated two chair lifts after the lower edge of Tortin Glacier, at 2,800 metres elevation, receded by 40 metres in just 15 years. 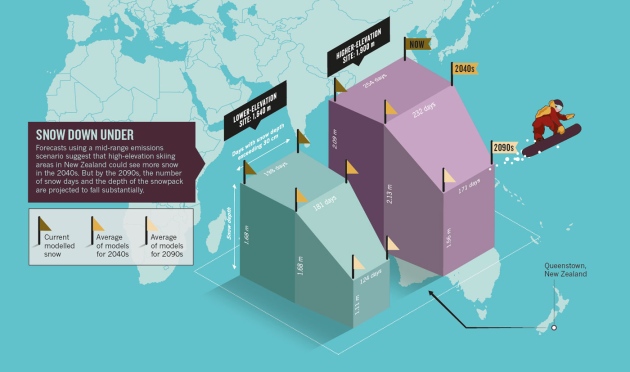 The outlook is not so gloomy everywhere, at least initially(see ‘Snow down under’). A warmer atmosphere can hold more moisture, so rising temperatures may actually increase snow at some high-elevation sites — such as the peaks of New Zealand and parts of the Swiss Alps — for several decades, until winter temperatures inch above freezing (see ‘Trouble in the Alps’). In fact, average snowfall over the past decade at the Verbier resort has outpaced that in each of the previous three decades. But the area has also had to deal with more variability, warmer summers and a spate of hit-or-miss winters. “The extremes are much higher or much deeper,” says Eric Balet, chief executive of Téléverbier, the company that owns 4 Vallées. That introduces an unwelcome element of unpredictability for resort managers. 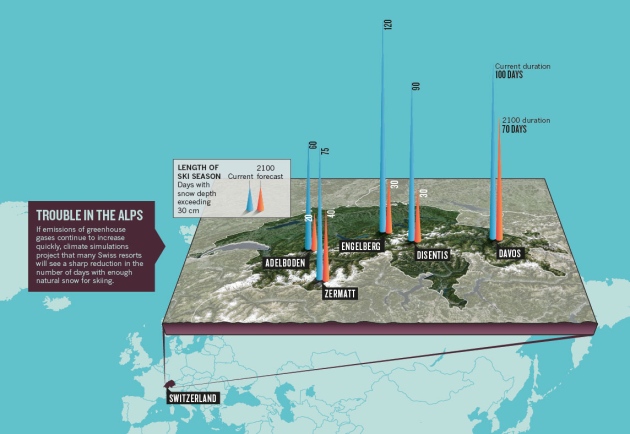 Skiing areas at low elevations face the worst forecasts. The US states of Connecticut and Massachusetts are home to a combined 17 skiing areas, and a study suggests that by 2039, none will sustain a viable skiing season — defined by industry as 100 days or more — even with artificial snow-making (J. Dawson and D. Scott Tourism Mgmt 35, 244–254; 2013). But at least 94% of the 18 resorts in the more northerly state of Vermont are projected to be viable until 2070 or beyond. A big difference is altitude: all the resorts in Connecticut and Massachusetts have a peak elevation below 750 metres, whereas 16 of those in Vermont exceed that, many by hundreds of metres.

The prospect of losing small skiing areas worries Auden Schendler, vice-president for sustainability at Aspen Skiing Company, which runs the Aspen and Snowmass resorts high in central Colorado (see ‘Rocky slopes’). “We call those feeder resorts,” he says, because their lower prices and gentler slopes attract new skiers to the sport. “It doesn’t serve us for other resorts to go out of business.” And small mountains can produce big stars. The 2010 Olympic downhill champion, Lindsey Vonn, started skiing at Buck Hill, a 364-metre mountain in Burnsville, Minnesota; reigning World Cup slalom champion Mikaela Shiffrin trained as a child at New Hampshire’s Storrs Hill Ski Area, where the peak elevation is just 177 metres. 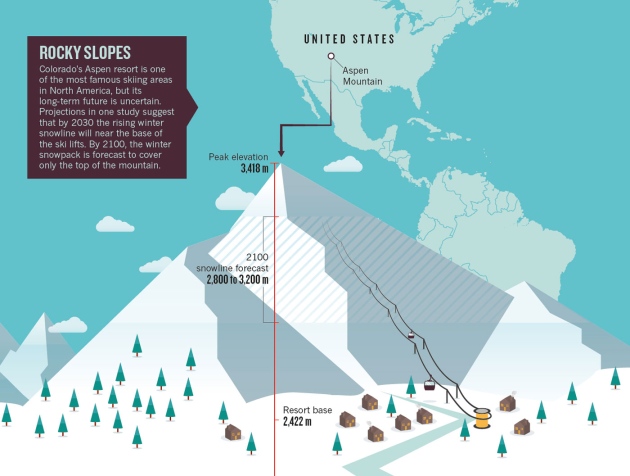 It is not only the quantity of snow that is crucial for winter sports such as skiing and snowboarding. Quality matters too, says Anne Nolin, a snow hydrologist at Oregon State University in Corvallis. A warmer, moister atmosphere will produce heavier, wetter snow, not the dry, fluffy ‘champagne powder’ prized by many recreational skiers. Artificial snow created with snow-making cannons is often icy, perfect for laying the base of lightning-fast competition runs but less favourable for the average skier. And temperatures that skirt the freezing mark increase the risk that precipitation will fall as rain, not snow, and will raise the density of the snowpack. “These just aren’t the kind of conditions that people go skiing for,” says Nolin.

It is not clear what the changing face of winter portends for future Olympic Games (see ‘The dwindling Olympics’). The competition has already been shaped by the vagaries of weather and climate, beginning with the decision decades ago to move figure skating, speed skating, ice hockey and curling indoors, says Daniel Scott, a geographer at the University of Waterloo in Canada. His research suggests that the pool of locations capable of hosting the games will shrink as the climate warms — and the colder mountain cities that may be the best fit may not have the infrastructure to handle a massive influx of athletes, spectators and organizers. That will force some difficult decisions, he says. “It’s an interesting dilemma the International Olympic Committee will be caught in.” 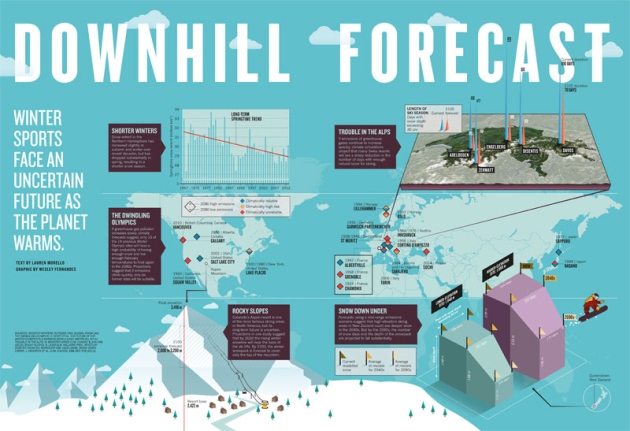