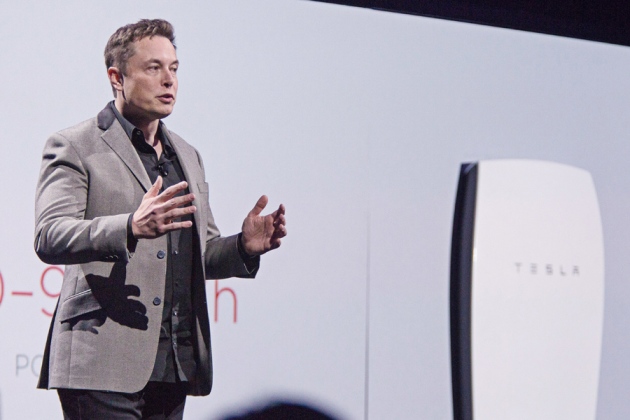 Tesla Motors, the electric-car maker based in Palo Alto, California, has announced that it will sell versions of its battery packs directly to consumers to help to power their homes, as well as to businesses that run larger facilities, and utility companies.

At a press conference in Los Angeles on 30 April, the company’s charismatic founder Elon Musk said that the firm’s lithium-ion batteries would enable economies to move to low-carbon energy sources. Solar energy sources are erratic — but by storing their energy and then releasing it when required, batteries could solve that problem, he said.

Many other companies also sell stationary battery storage for buildings and for power grids — but analysts say that the technology is still too expensive for widespread use. Here, Nature explores whether Tesla’s announcement might change the game.

No. The company's packs contain standard lithium-ion batteries based on tried-and-tested technology, which are similar to those that many other firms have on the market.

Although companies and academic labs are pouring billions of dollars into research and development to significantly increase the amount of energy that batteries can store and to lower their cost, it could take years before significant breakthroughs reach the market (see ‘The rechargeable revolution: A better battery’).

Has Tesla managed to cut the cost of battery storage?

Possibly — but it’s unclear. Cosmin Laslau, an analyst for Lux Research, a consulting company in Boston, Massachusetts, says that he thinks Tesla’s batteries may be a bit cheaper than their competitors, although not by a lot.

Tesla did not reveal the price of its larger batteries for businesses and utilities, but it will sell residential models for US$3,000–3,500, or a cost of about $350 per kilowatt-hour (kWh) of energy stored. But that price tag does not include electronics that are required for connecting a battery to a home system, nor installation costs. Together, these costs could more than double the final price for residential consumers.

The internal production cost of lithium-ion battery cells (the cylindrical elements that store energy inside a battery, and which Tesla buys from Japanese electronics giant Panasonic) is generally thought to be around $200 per kWh, according to Mohamed Alamgir, director of research at LG Chem Power in Troy, Michigan, a subsidiary of the South Korean chemistry giant LG Chem. Incorporating those cells into a battery pack typically doubles costs, so that a battery the size of Tesla’s could cost about $4,000 to produce. Tesla could be selling these products at a loss for the time being, says Laslau, but could turn that loss into a profit once it scales up production at the $5-billion battery 'gigafactory' it is building in Nevada.

Does a home need a battery?

Most homes in the Western world probably do not. In places that have a good connection to the electricity grid, and where grid power is reliable, households do not need batteries for backup. And even those homes that have solar panels on the roof and extra energy to spare can use the grid itself as their battery: in many places, such as Germany and several US states, homeowners can sell their excess power during the day to the local electricity utility, and buy it back at night.

But the world’s electricity utilities and power grids themselves need more inexpensive energy storage. Countries that have been aggressively installing solar panels and wind turbines but that have not invested enough in energy storage have had trouble integrating the extra capacity into their grids. Germany, for example, has provided lavish subsidies for homeowners who installed solar panels, but when residents installed more photovoltaics than expected, electricity utilities had to spend more to keep the grid running smoothly, says Haresh Kamath, an energy-storage expert at the Electric Power Research Institute in Palo Alto. “The effects of unplanned deployment can be dangerous in terms of grid reliability,” he says.

When utilities need to manage loads on the grid, it is still cheaper for them to fire up gas turbines. The US Department of Energy estimates that for energy storage to be competitive, it must not cost much more than $150 per kWh. Assuming a cost of $700 per kWh, Tesla’s systems are still much more expensive than that. Right now, the cheapest way to store energy is to pump it uphill into a hydropower reservoir — where one is available. The next-best storage solution is to compress air in large underground reservoirs.

But even if they cannot economically store hours’ worth of a country’s energy needs, batteries can help to make the grid more reliable. And the US energy department's target does not take into account the social costs of carbon emissions, says Jeff Dahn, a battery researcher at Dalhousie University in Halifax, Canada. “If there was an appropriate price associated with the generation of carbon, we'd all be using solar panels and paying whatever it costs to store electricity,” he says.