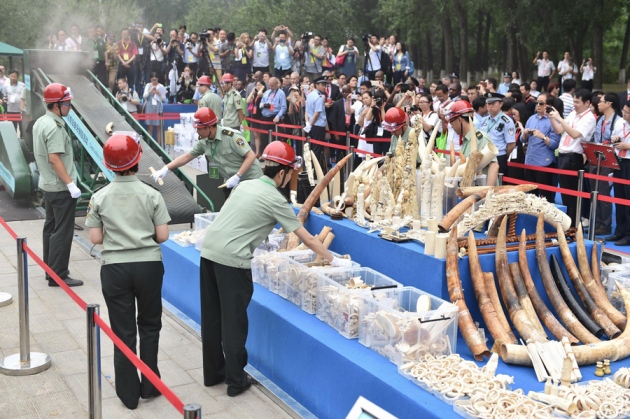 The Chinese government crushed kilos of illegal ivory on 29 May, but poaching is still threatening elephants in Africa.

“Like a funeral for elephants.” That’s how Lishu Li, who works on the wildlife trade programme for the Wildlife Conservation Society China in Beijing, described the crushing of over 650 kilograms of confiscated illegal ivory last week. It was “quite dusty”, he said. “I think I inhaled a lot of ivory.” The crush, on 29 May, came with a dramatic twist: at the same time Zhao Shucong, head of the State Forestry Administration, announced new controls on the country’s legal ivory trade.

China's legal trade has been linked to the illegal trade in ivory, which has driven a surge in poaching in Africa. So conservation groups have hailed Zhao’s statement as a potential game changer. Nature asks what these controls will actually achieve.

Is there now a ban on the ivory trade in China?

It is not clear cut. Zhao said in his announcement: “We will strictly control ivory processing and trade until the commercial processing and sale of ivory and its products are eventually halted.”

He noted that the legal trade would be restricted, but did not use the word 'ban'. Nor did he give any sort of timeline, explains Li, who added that in one scenario, ivory could still be carved at government-approved education and cultural centres. In this case, the products would go only to museums, rather than to retailers.

But Zhou Fei, head of wildlife trade monitoring organization Traffic China, thinks it will be “a total ban” that will happen "around 2017 when China’s legal ivory stockpile will be gone”.

Why is China of such interest to elephant conservation?

A handful of other countries, notably Thailand, are listed as countries of “primary concern” by the Convention on International Trade in Endangered Species of Wild Fauna and Flora (CITES) — the body that regulates trade in endangered and potentially endangered animals and plants. But most observers assume that it is China’s black market that has largely driven the huge rise in African poaching over the past decade.

The ivory trade in China seemed to be dying out at the turn of this century, but in 2002, state and local governments started promoting the country’s cultural heritage. After 2006, this included ivory carving and the ivory market, and came just as a new, wealthy middle class emerged in the country. Prices for ivory — and demand — surged.

Researchers have shown a correlation between the rise in the number of animals poached and the number of items traded in China’s auction markets1. And there have been large seizures of illegal ivory in the country, including 12,000 kilograms of ivory in November 2013 in Xiamen. Some of this seizure came from Tanzania — which yesterday announced a decline in elephant numbers from 109,051 in 2009 to 43,330 in 2014.

What is the relationship between the legal and illegal markets?

Licensed retailers in China can sell ivory that was acquired before a 1989 CITES trade ban, or material obtained through 'approved' purchases made since then. This includes China's one-off purchase of a stockpile of 62 tonnes of ivory, imported with CITES approval in an unusual 'one-off sale' in March 2009. But a large increase over the past decade in licensed ‘white market’ processing factories and retail outlets has been matched by a growing black market for ivory in retail shops and online. And the black market gets mixed in with the white. According to a 2011 survey by the International Fund for Animal Welfare, nearly 60% of licensed retailers violated the terms of their licences, often by selling illegally poached ivory.

“The fact that any legal trade exists provides an easy loophole for sellers to sell new material, and prevents and disempowers reporting of any infringement of regulations — thereby permitting the sale of further ivory, pangolin and other materials,” says Alice Hughes, a conservationist at the Chinese Academy of Sciences' Xishuangbanna Tropical Botanical Garden in Yunnan.

Will Zhao’s announcement make a difference?

China has already taken a variety of measures to restrict the illegal ivory trade. These include shutting down licensed traders found to be operating illegally, arresting an increasing number of smugglers, and limiting online sales that use other terms for ivory — such as “high quality white plastic” or “jelly material” — to circumvent monitoring. The government has also enlisted celebrities such as film star Jackie Chan and basketball hero Yao Ming, who have appeared in commercials to demean the illegal trade of ivory.

The latest move to reduce or ban the legal trade is a further encouraging sign from the Chinese government, says Hughes. But she cautions that "new ways to circumvent regulations and provide new routes to trade ivory” may well appear. “I cannot see that the announcement will make as much difference as is needed in the trade of these species,” she adds.