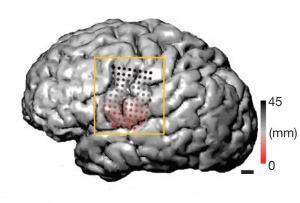 Electrodes in an epilepsy patient's brain (shown here in magnetic resonance imaging) revealed strikingly different patterns of activity in the articulation of consonants and vowels.

Say the word 'rutabaga', and you have just performed a complex dance with many body parts — lips, tongue, jaw and larynx — in a flash of time. Yet little is known about how the brain coordinates these vocal-tract movements to keep even the clumsiest of us from constantly tripping over our own tongues.

A study of unprecedented detail now provides a glimpse into the neural codes that control the production of smooth speech. The results help to clarify how the brain uses muscles to organize sounds and hint at why tongue twisters are so tricky. The work is published today in Nature1.

Most neural information about the vocal tract has come from watching people with brain damage or from non-invasive imaging methods, neither of which provide detailed data in time or space2, 3.

A team of US researchers has now collected brain-activity data on a scale of millimetres and milliseconds. The researchers recorded brain activity in three people with epilepsy using electrodes that had been implanted in the patients' cortices as part of routine presurgical electrophysiological sessions. They then watched to see what happened when the patients articulated a series of syllables.

Sophisticated multi-dimensional statistical procedures enabled the researchers to sift through the huge amounts of data and uncover how basic neural building blocks — patterns of neurons firing in different places over time —  combine to form the speech sounds of American English. The patterns for consonants were quite different from those for vowels, even though the parts of speech “use the exact same parts of the vocal tract”, says author Edward Chang, a neuroscientist at the University of California, San Francisco.

The lips, the teeth, the tip of the tongue

The different patterns might help to explain why slips of the tongue occur in predictable ways: we often interchange two consonants in so-called spoonerisms ('boat tag' instead of 'tote bag') or confuse two vowels ('wheel' for 'whale'), but rarely swap consonants for vowels4.

The team also found that the brain seems to coordinate articulation not by what the resultant phonemes sound like, as has been hypothesized, but by how muscles need to move. Data revealed three categories of consonant: front-of-the-tongue sounds (such as 'sa'), back-of-the-tongue sounds ('ga') and lip sounds ('ma'). Vowels split into two groups: those that require rounded lips or not ('oo' versus 'aa').

“This implies that tongue twisters are hard because the representations in the brain greatly overlap,” Chang says. 'Sss' and 'Shh' are both stored in the brain as front-of-the-tongue sounds, for example, so the brain probably confuses these more often than sounds that are made by different parts of the tongue. ‘Sally sells seashells’ is tricky. ‘Mally sells sea-smells’ is not.

Although the study was limited by having only a small sample of participants, and all with the same disorder, it nonetheless provides invaluable information, says neuroscientist Gregory Hickok at University of California, Irvine. This line of work might eventually help people who have strokes or other problems that affect speech.

“If we can crack the neural code for speech motor control, it could open the door to neural prostheses,” Hickok says. “There are already neural implants that allow individuals with spinal-cord injuries to control a robotic arm. Maybe we could do something similar for speech?”